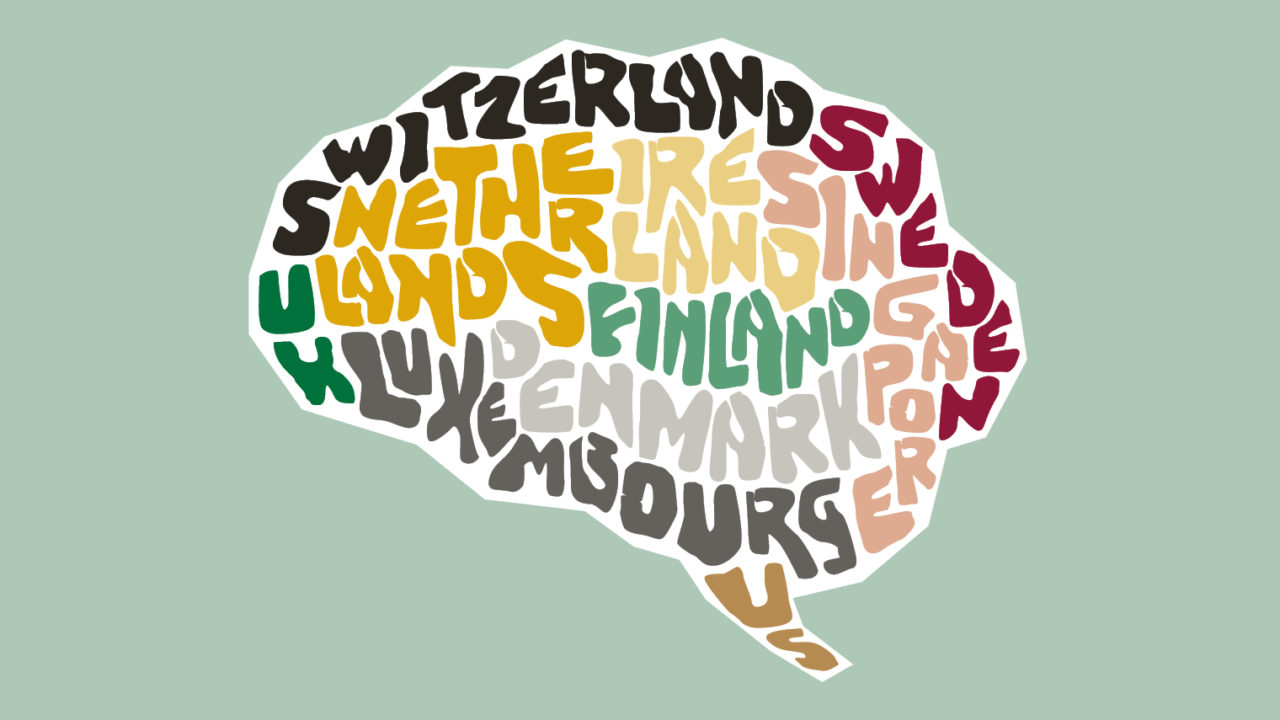 The Global Innovation Index 2015, produced by the World Intellectual Property Organization (WIPO), charts the world’s most innovative countries with a focus on effective innovation policies for development. The report covers 141 economies around the world and uses 79 indicators across a range of themes.

“Innovation holds far-reaching promise for spurring economic growth in countries at all stages of development. However, realizing this promise is not automatic,” said WIPO Director General Francis Gurry. “Each nation must find the right mix of policies to mobilize the innate innovative and creative potential in their economies.” 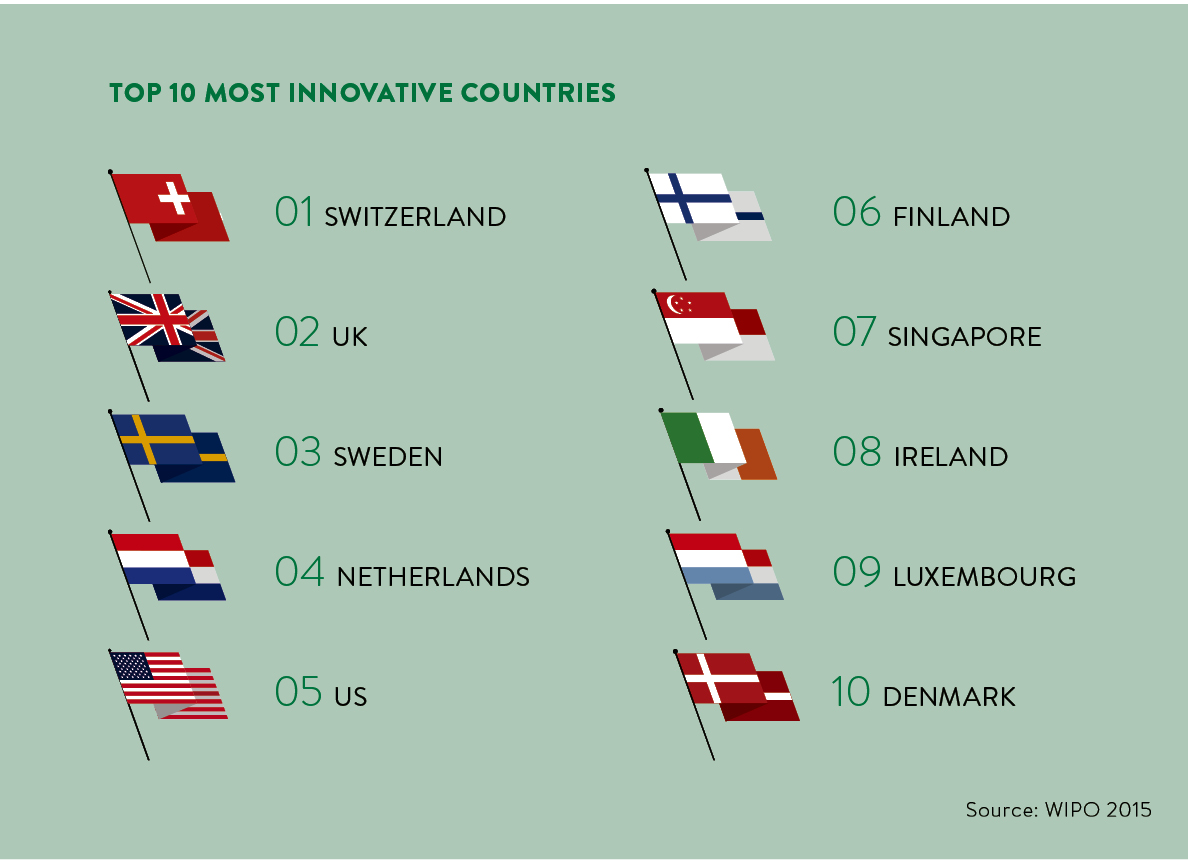 Switzerland topped the list, followed by the UK and Sweden. The Netherlands followed in close fourth and the US ranked fifth. The ranking is based on seven core elements including institutions, human capital and research, infrastructure, market and business sophistication, knowledge and technology tools, and creative outputs. 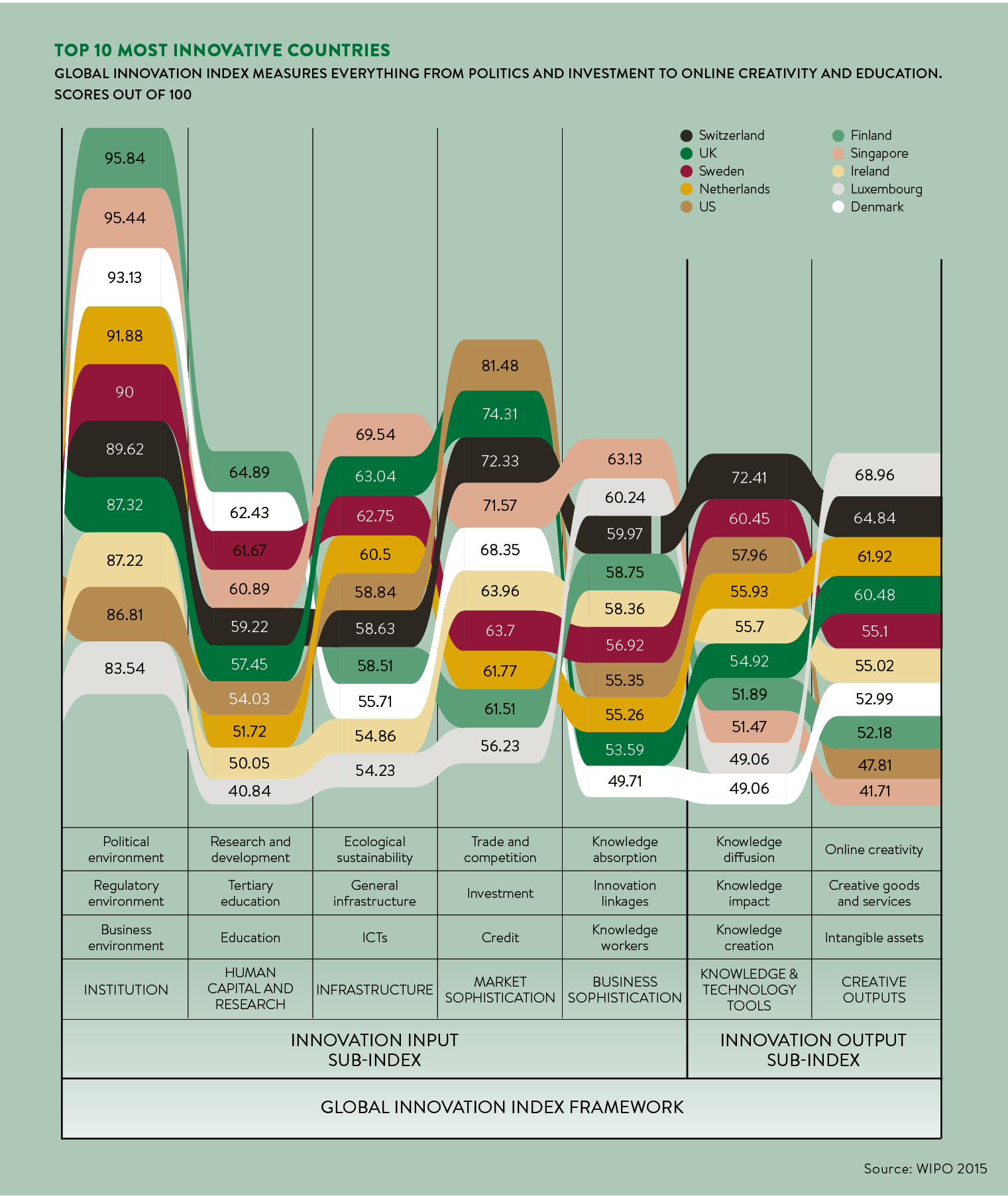 Though Finland came sixth in the overall ranking, it outranked the other countries featured in the top ten list for the institutional element of the Index (gaining top marks), which encompasses the political, business and regulatory environment of a country. Finland also beat its counterparts in the human capital and research measure, which assesses the quality of education, research and development. 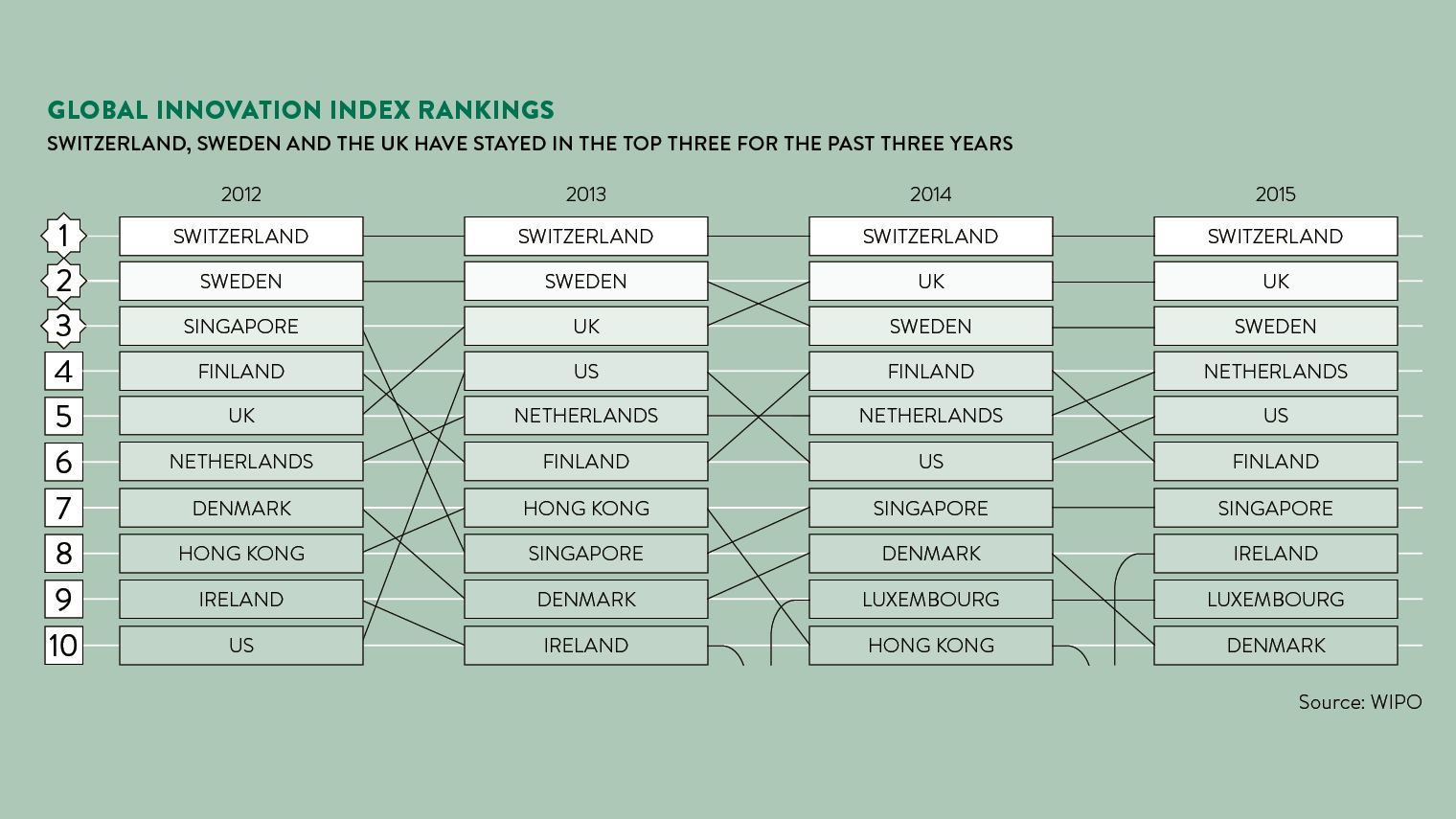 Switzerland, the UK and Sweden have retained their positions as the top three most innovative countries for the past three years; however when it comes to innovation quality, which measures university performance, the reach of scholarly articles and the international dimension of patent applications, the US holds the top place within high-income groups, followed by the UK, Japan, Germany and Switzerland.

Credit Suisse attributes Switzerland’s title of ‘Most Innovative Country’ to two factors: foreign investment and world-renowned institutions; three quarters of funding for research and development comes from foreign investors and the Swiss Federal Institute of Technology Zurich (ETHZ) and EPFL in Lausanne are in the top 20 universities worldwide. The universities apply for approximately 200 patents every year. 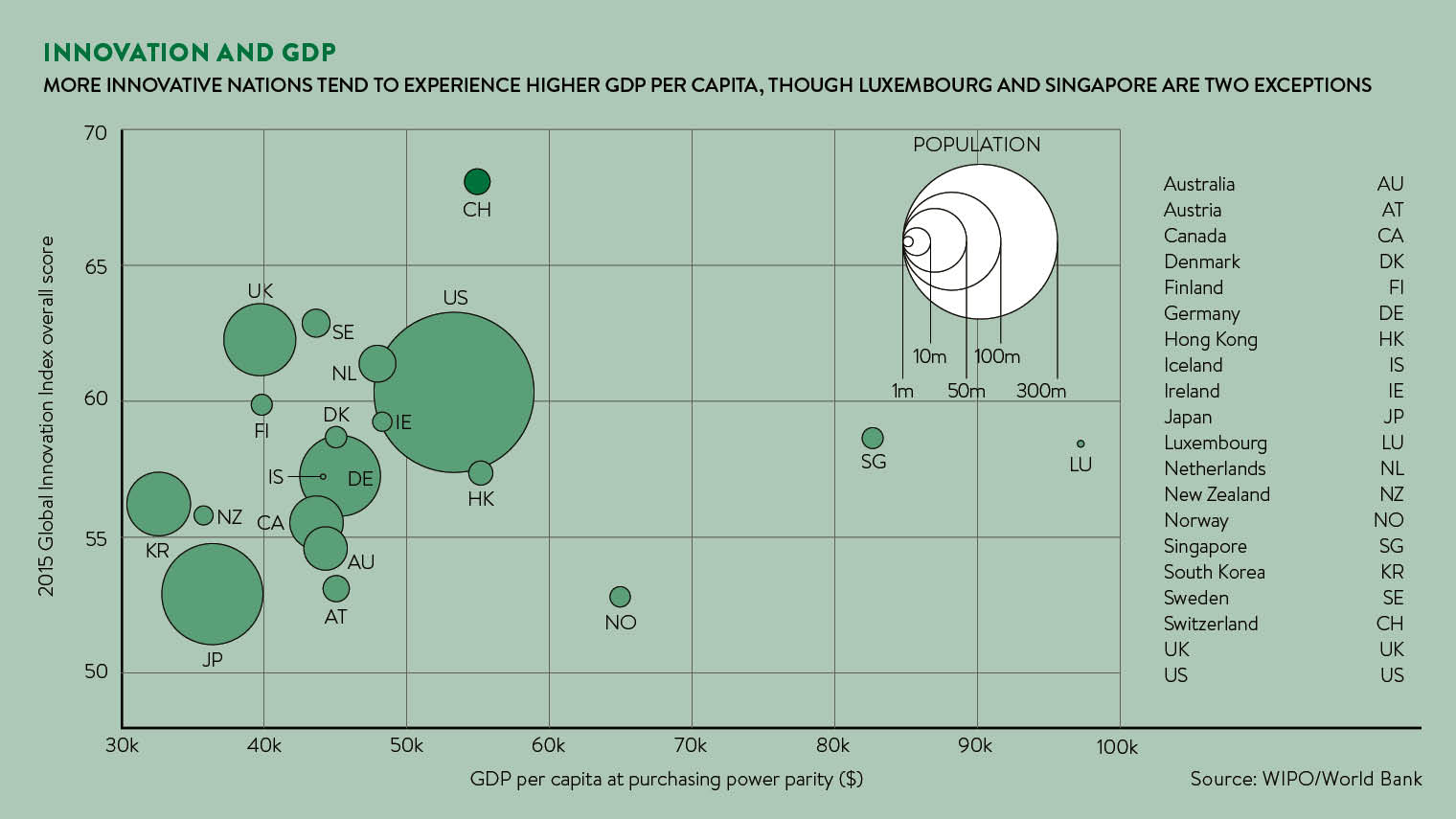 While Luxembourg and Singapore ranked lower than Switzerland in the Global Innovation Index (see first chart), their GDP per capita was higher than all the other countries in the top ten. Marks & Clerk suggest that Luxembourg’s high score might be attributable to the fact that many companies use the country as an EU base for tax reasons which creates the impression that it is more innovative than it actually is. The fact that Luxembourg was ranked first for Foreign Direct Investment supports this theory. 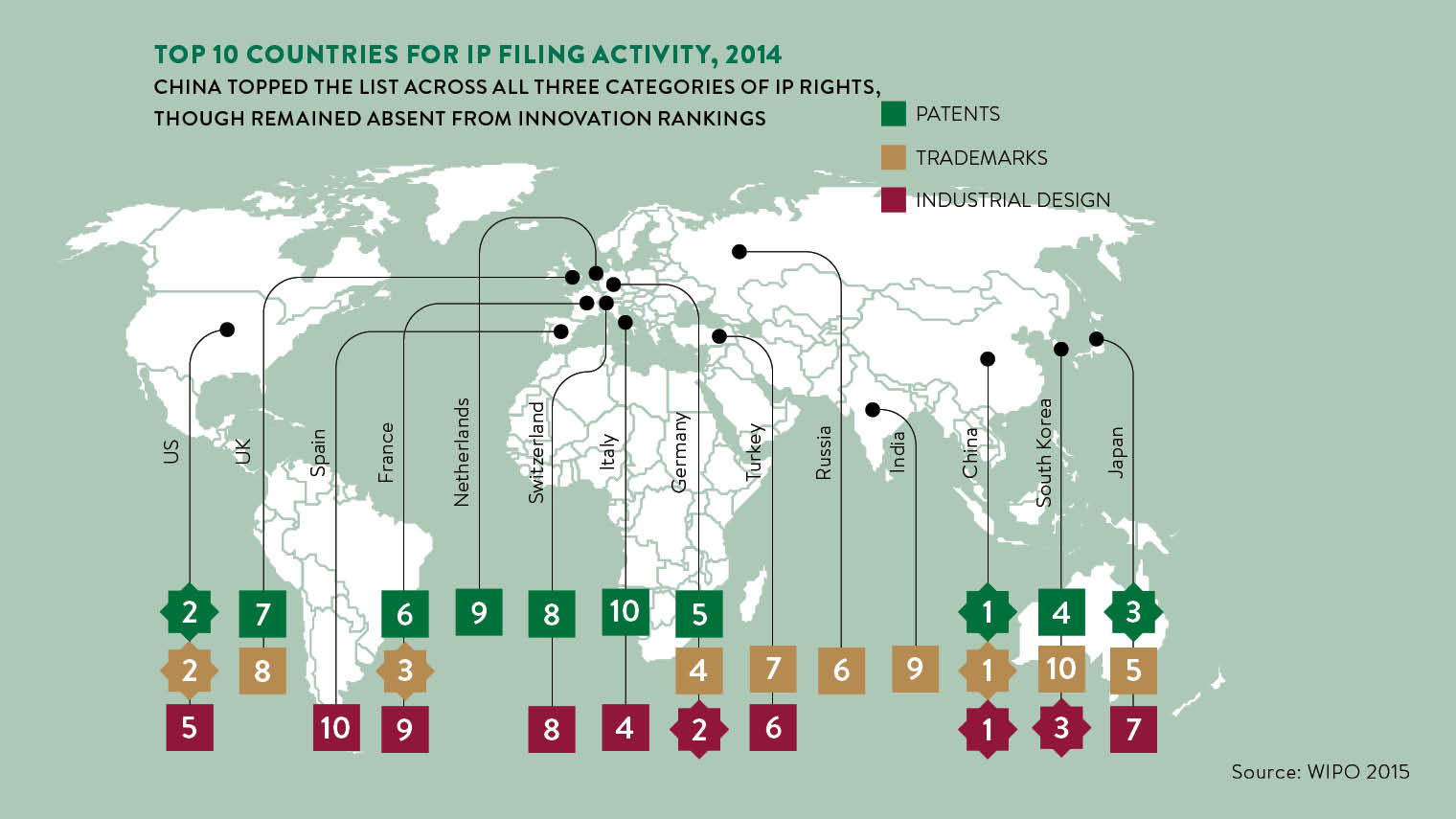 Despite China’s high churn rate of patents and trademarks, it didn’t make the innovation rankings largely due to the quality of innovation where it lags far behind the Top 10. The science and technology policies implemented over the past three decades as well as an increasingly educated workforce do, however, lay out a solid foundation for China’s future development.