Artificial intelligence is impacting the financial services sector more than most, with sophisticated algorithmic trading, posing a serious challenge for traders and regulators alike

Demand for non-equity trading algorithms serving institutional asset managers and retail investors is expanding the prevalence of artificial intelligence in the world’s financial markets.
A recent report by Thomson Reuters estimates that algorithmic trading systems now handle 75 per cent of the volume of global trades worldwide and this figure is predicted, by those in the industry, to grow steadily. The reasons are three-fold.

Firstly, while the institutional market has enjoyed a large variety of “algos” serving the equity markets to date, other areas such as futures are still witnessing huge product demand and innovation as a result.

Secondly, regulations affecting the institutional investment market, such as the European Union Markets in Financial Instruments Directive II or MiFID II, are pushing for greater automation of trades in some asset classes which traditionally were not executed electronically.

The fixed income market is a prime example and negotiations between industry groups are ongoing as to how practical a fully automated fixed income could really be, given the magnitude of the required shift from telephone to electronic trading.

Thirdly, the retail trading market continues to expand worldwide, which is opening up algorithmic trading to a whole new group and further increasing demand for the technological advancement.

Ralph Achkar, product director for capital markets at trading infrastructure group Colt, says algo-trading demand has shifted considerably over the past three decades from a focus on speed to a focus on an increased number of variables.

He explains: “We’ve seen a move away from pure access needs. Initially the move was towards a focus on low latency, but more recently [it has been] to a deterministic environment, and now participants are looking for the ability to chase short-lived opportunities across different venues, asset classes and geographies.

“This is directly correlated to the increasing sophistication of algorithmic trading. Initially people were looking for simply the fastest access to markets, then the ability to control their low-latency connections better, and into the future traders will need to look across asset classes and geographies as the world becomes smaller and events in one trading centre are rapidly felt in another.” 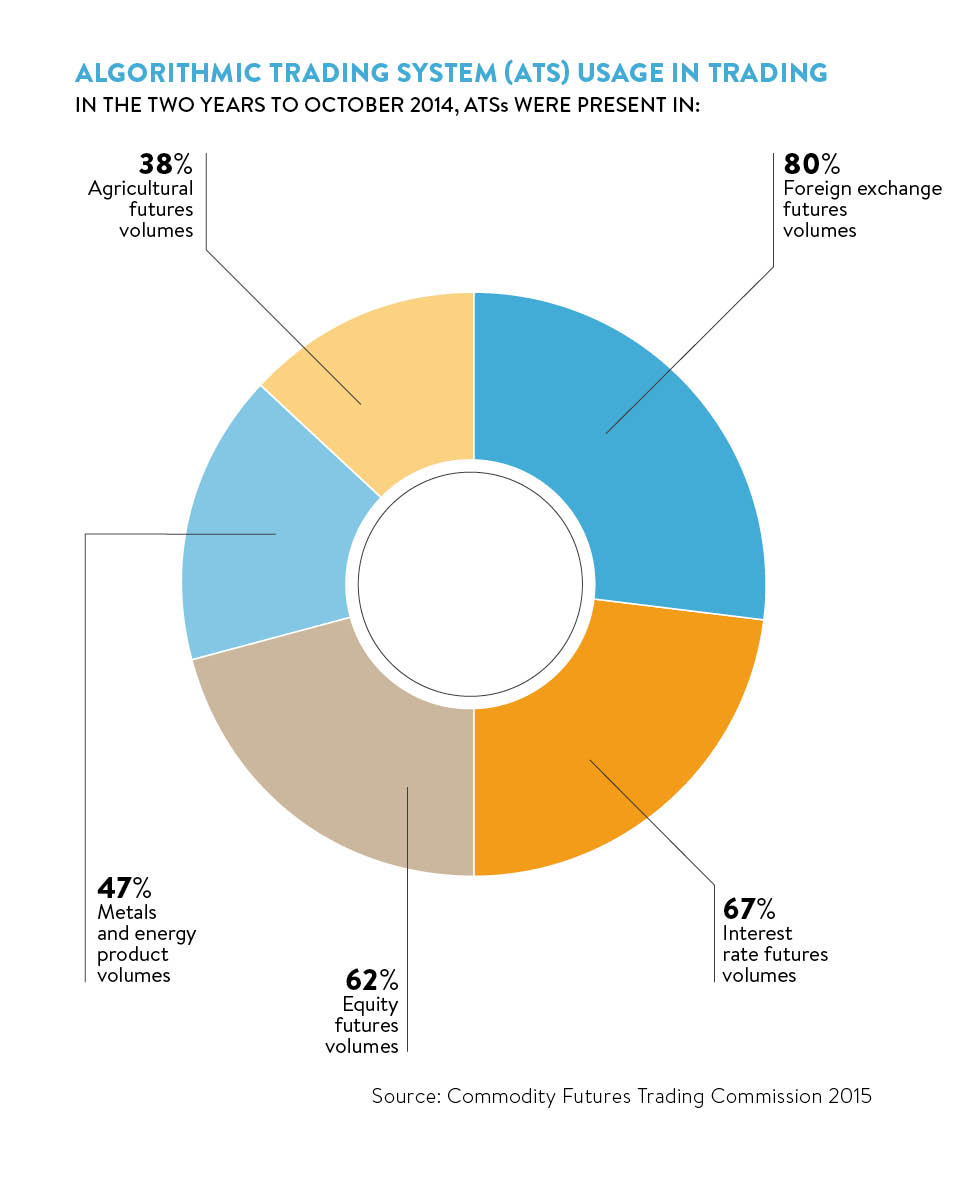 And it’s not just volumes that are being impacted by the development of new algorithms. Sell-side firms that take on counterparty risk are now using algos to ensure they set the right level of risk and fully understand their exposure.

Jilali Azzouz, a quantitative trader at Ayondo Markets, explains: “Our risk model is now using algorithms to provide momentum metrics on our exposure at every point in time and decisions that were human driven in the recent past are now taken by computers.

“Algorithms, especially those focusing on risk management, as opposed to discretionary trading, are able to simulate thousands of risk scenarios within a second. I believe every buy-side algorithm should have a strong risk management algorithm running in parallel with the trading algorithm. A more efficient risk management leads to less ‘crazy’ behaviours on the market and hence will bring more stability, although I’m not against volatility.”

The development of the algorithms is only part of the story. Businesses such as Ayondo Markets have recognised the importance of machine learning, where the algos learn from their mistakes to ensure their statistics are likely to be more accurate. This is also an approach being adopted by some investment management houses, employing risk premia or smart beta strategies.

According to Mr Azzouz, there have been improvements in back-testing, execution and liquidity. “With back-testing improvements, they now take into account slippage factors and margin requirements. The empirical issue with algorithmic trading, related to the way they run back-tests, is the fact they tend to ignore the liquidity available,” he says.

“It’s still difficult to assess what was the liquidity at a specific point in time in the past, but now trading algorithms are written to assess the best liquidity providers at the time of execution.”

As machine learning becomes more sophisticated and gives birth to the next generation of algos, market experts are warning regulators will need to keep pace to prevent major accidental market movements

However, as machine learning becomes more sophisticated and gives birth to the next generation of algos, market experts are warning regulators will need to keep pace to prevent major accidental market movements.

Tony Virdi, head of banking and financial services in the UK and Ireland at fintech consultancy group Cognizant, says: “As machine learning improves, further growth of algorithmic trading is expected. The important factor, however, that regulators will watch is market integrity and equality to ensure non-algorithmic trading firms that compete against others employing automated solutions do not play in an uneven competitive market.”

The difficulty for global regulators is the pace of change is so rapid and regulation should not stifle innovation. Adam Jones, senior consultant at financial software group Altus Consulting, believes that the regulation of AI engines operating within financial services more widely, and trading specifically, will require a sea change of regulatory thought.

He says: “If you thought it was a challenge trying to regulate bad behaviour out of a group of misguided bankers or financial advisers, try regulating something which is smarter than you and quicker than you.

“Day in day out, firms in the UK are grappling with the various rule books and guidelines published by the regulator. We might soon witness artificial intelligence engines devouring these rule books, and feeding back on the contradictions and inconsistencies within them.

“The regulator and the government need to be in a position to provide sensible and proportionate guidance to regulation for these firms, and to do so in a way which still manages to protect the UK retail investor and the UK economy.”

Mr Jones’ thoughts are shared by many. Cognizant’s Mr Virdi cites the ongoing saga of MiFID II, which already addresses automated trading. “Among other things, this states that firms should have controls in place to make sure trading systems are resilient and have capacity, preventing them sending orders which are incorrect or inaccurate. Future regulation will need to define the set of controls appropriately,” he says.

“In Germany, where high-frequency trading (HFT) is a licensed activity, fees are imposed on those who make ‘excessive use’ of HFT on exchanges, known as the excessive system usage fee.

“Overall, the biggest challenge comes when HFT presents new risks which wouldn’t exist otherwise, such as flash crashes. It is therefore important that regulators are well versed in the operation of algorithms and have the flexibility to be able to engage new legislation where required.”

So with technology advancement moving at such speed, should those working in banking, trading and financial services more broadly be concerned for their jobs?

Simon Smith, director of UK operations at trading group FXPro says this is a complex question that goes beyond the evolution of artificial intelligence. “The landscape is changing and not only because of algo trading. Banks used to employ technical analysts to spew out loads of charts and levels. I only know one remaining now of my contacts,” he says.

Colt’s Mr Achkar says the increasing focus on technology is nothing new and the evolution of markets has been happening for decades. “It’s also in part due to the drive from regulators to increase transparency and there’s clear pressure on participants who have been resistive to this technological change.

“Historically, it was the traders’ relationships that stalled technological progress in these areas, but cost and regulatory pressures are making this position untenable. This does not mean that all roles in a trade life cycle will be automated or that there will be no role for human relationships. Rather the change will focus human intervention on some parts of a trade life cycle versus others.

“We expect some recycling of knowhow to occur, as well as a change in the amount of human intervention in certain asset classes, which are being pushed to an electronic model over the next three to five years.”

FUTURE OF THE STOCKMARKET

Founded by South African mathematician Richard Craib, Numerai created the world’s first encrypted data-science tournament for equity price predictions in December last year and has since received more than 2.7 billion estimates from data scientists all over the globe.

The concept, technology aside, is relatively simple: data scientists and computer programmers are able to download encrypted financial data, build their own algorithms through machine learning, and anonymously upload their price predictions. Numerai then uses the best models to trade on the stock market and the winning contributors are rewarded with a portion of the profits, paid in bitcoins.

While experts largely estimate AI will surpass human intelligence by 2040, Mr Craib believes this could happen in the stock market sooner. “I think it’s really untenable to think that, long term, humans will be better than AIs at predicting the future of an equity in 100-dimensional feature space,” he says.

“I think we are already at the point where nearly every hedge fund in the world has a huge data-science component. Even value investors use sophisticated filters to screen investment ideas. But investors using rules of thumb learnt in finance textbooks rather than strategies learnt from data are going to lose badly.

Does this spell the end of the stock market analyst? Not just yet, according to Mr Craib. He says machine learning is only able to improve with large amounts of training data and human-generated earnings estimates provide them with just that. “I think it will take some time for human analysis to go away, but synthesising the collective human analysis is already the domain of machines,” he adds.

The fundamental reason for using AI in the stock market is to improve efficiency. “However, the cost of efficient markets right now is that there is a lot of human capital locked up in hedge funds,” he says. “The promise of artificial intelligence in finance is total efficiency and the freeing up of human capital to advance other fields or do whatever they want.”