The office rental market in 2017

The continued rise of ‘alternative’ space means options such as serviced offices and co-working can no longer actually be labelled as alternatives; these are firmly in the mainstream. Throw in all the uncertainty following Brexit, increasing business rates and ever-heightening rental rates, and it’s very easy to get bogged down in the simple act of choosing an office.

Peter Ames, head of strategy at Office Genie, offers the following thoughts on the market, and what options mean what in 2017.

Traditional office space remains the most popular rental option by a considerable distance. The reasons for this are the same as ever: Traditional space, let by the square foot, gives you total control of a workspace; to design and fit out as you like.

Alongside this can also come a certain sense of prestige: you have your HQ, you have made it. Perhaps most importantly, it generally remains the cheapest means of renting office space, even in the modern market.

In a world of spiralling prices, with a market fuelled by post-Brexit uncertainty, traditional offices might be less practical than ever

However, in a world of spiralling prices, with a market fuelled by post-Brexit uncertainty, traditional offices might be less practical than ever. While prices do indeed compare favourably with the other options, you will be at the sharp end of the continual price rises that have made the London market one of the most expensive in the world. But this is not limited to the capital, by any means, with everywhere from Bristol to Manchester seeing prices rise.

Some believe increasing numbers of offices remaining empty following Brexit may actually help to reduce prices. Yet particularly in uncertain financial times, the lack of flexibility afforded by traditional rentals is especially poignant – now for large business as well as small.

Contracts tend to run for at least three years, before a break clause, which represents a significant commitment, at a time when many are looking for flexibility.

Now a widely recognised alternative to traditional space, arguably serviced offices’ main selling point is that they can offer this flexibility: contracts can be as short as daily, although monthly or three-monthly is most common. Indeed, where traditional spaces may remain empty, it would appear flexible alternatives are seeing a considerable post-Brexit boost, according to research published in the Financial Times.

Beyond this, serviced offices remain very much the all-inclusive, high-end option they have always been. All the key things you need to run your business are generally included in the rental rate, everything from meeting room-access, through to reception services to the basics such as broadband, utilities, furniture and kitchens. However, there can occasionally be optional extras/upgrades, so make sure you’re getting exactly what you need.

Serviced spaces do come with their own set of drawbacks: Firstly, there is little scope to take true ownership over a space. As such they may not feel as much of a ‘home’ for your business as a traditional let would. Most significantly, serviced offices remain generally the most expensive means of renting office space; on a per-square-foot basis they can work out significantly more expensive than traditional space, making them a suitable option if you are a ‘cash-rich, time-poor’ business, or one seeking flexibility.

Arguably the biggest-growing part of the office space sector. This option, where individuals and businesses let desks in a dedicated desk-rental environment, gives tenants access to many of the features associated with serviced offices.

Co-working is no longer solely the work of small independent spaces (although they remain the lifeblood of the industry): WeWork’s valuation is in the billions of dollars, while Blackstone recently bought a stake in UK-based the Office Group that values them at a cool half billion. Make no mistake; co-working is big news, and big business.

The adoption of co-working practises by multinationals underline how it is now firmly entrenched in the mainstream. IBM, for example, have rented an entire WeWork property, and the company have recently launched an ‘office design and fit out’ arm – aiming to bring the collaborative qualities of co-working to businesses on a large scale. 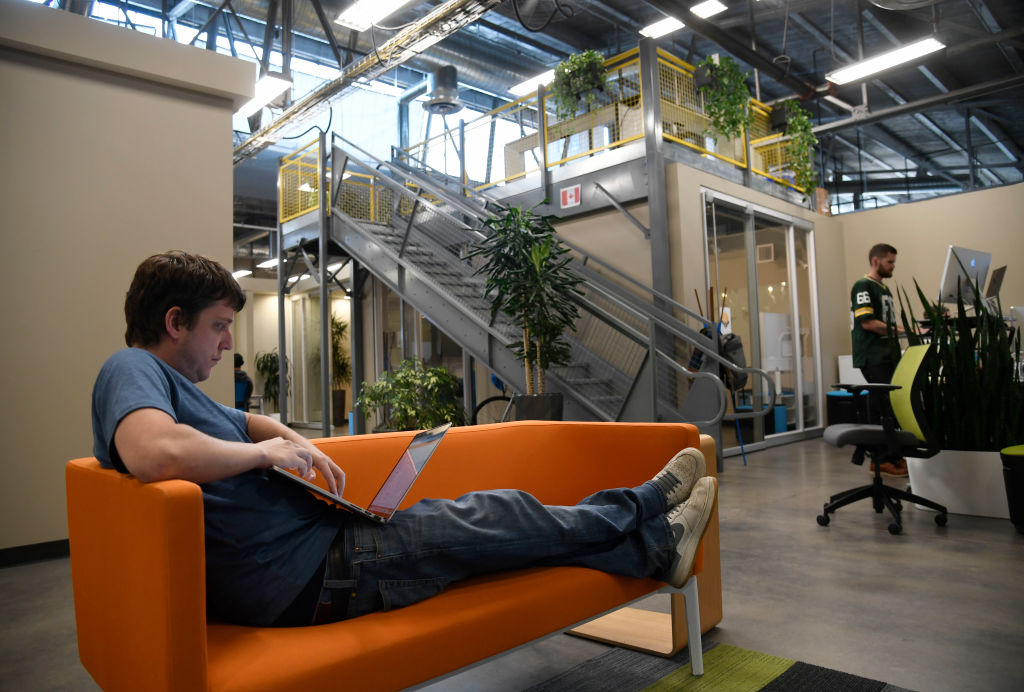 So why is everyone trying to get a piece of the co-working pie? What can really set a co-working space apart is the atmosphere; these spaces are popular with small businesses and entrepreneurs. Opportunities for networking and collaborating can be abound.

As with all of these options, there are downsides to consider: These are often the most open, and potentially lively environments you will come across, and this will not work for everyone – you certainly don’t want to end up working from a disruptive environment, or even with a competitor (this is rather unlikely, however). Although it will be doing most spaces a disservice to say they don’t cater for most needs in the types of workspace provided.

For the uninitiated, this office sharing is where you rent space in another company’s office. The phenomenon continues to go from strength to strength. We have had almost 4,000 business list their spare desk space. Quietly, office sharing is growing as a practical, cost-effective alternative to both traditional space, and its more expensive flexible-rentals.

While you won’t get the professional finish of co-working or serviced offices, shared offices come at a lower price than the other flexible, all-inclusive alternatives above. They can also work out well for both parties, with fresh faces potentially bringing energy, vibrancy and a slew of good ideas for all concerned.

Quietly, office sharing is growing as a practical, cost-effective alternative

As with co-working spaces, potential tenants should make sure they get to know their hosts; that they work well alongside them and that they’re definitely not a competitor. Furthermore, unlike co-working spaces and shared offices, these are not dedicated rental spaces, so there won’t be that professional quality.

There will more than likely be a lower service level (although many hosts will offer up meeting-room access in addition to the desk, chair, broadband and utilities generally included). It’s also essential for businesses to ensure they are happy with sending their own data across a shared network.

Finally, a word for the office rental market’s biggest surprise. We have seen a significant rise in the proportion of virtual office take-up in the last twelve months, compared to the previous twelve; growing from 1.7% of spaces let overall, to a much more significant 6.6%.

Virtual offices are where you receive most to all office ‘services’ (e.g. postal addresses, call-answering, often bookable meeting rooms) without actually having to rent any physical space. As such they almost completely avoid rising rental rates. Again, we also return to themes of uncertainty, and with a virtual space you can do your work exactly wherever suits you, but maintain a professional image.

Perhaps it is now increasingly realistic to see a world in which the office is a far more fragmented affair, with people working where is genuinely best for both them and their employer. Might we even see a company with an entirely virtual headquarters? Very possibly. Although this is perhaps a story for another time.