The phone in your pocket, powered by just a sliver of battery – it’s hard to imagine this discrete package of plastic, metal and glass is one small part of an energy revolution. It’s a revolution that’s transforming how we generate, transmit and ultimately use power.

You could already be a digital warrior for change. Users of online energy services, such as Google’s Nest, which allows remote control of domestic heating through an internet-enabled thermostat, are today’s pathfinders for the profound changes to come.

Like all revolutions, a range of transformative influences have emerged to act out their part. Key factors in the energy equation are the growing use of renewables, the emergence of low-cost electricity storage and electric vehicles.

As renewables, storage and electric vehicles increasingly take off though, the more distributed nature of energy assets represents both challenges and opportunities. The solution to both of these is more intelligent and sophisticated control.

Compared with conventional power stations, renewables such as wind and solar tend to be produced in smaller units, with more systems spread out over a wider area and with a more variable supply.

This is a growing problem for the operator of the national transmission grid and the local distribution companies tasked with matching supply and demand reliably and at a constant voltage and frequency.

The grid infrastructure which brings energy to individual homes and businesses was conceived in a bygone age and designed to allow power to flow in one direction from large central power stations to consumers.

As renewables increasingly penetrate into homes, schools and commercial buildings, with feed-in or buy-back tariffs for energy generated by consumers’ solar panels, for example, more power is flowing back through the grid, often at inconvenient times when demand is low.

While previously this required additional investment in grid infrastructure – fixed assets such as cables and substations – advances in IT and communications are increasingly looking to harness the advantages of the distributed world. In doing so, significant savings on conventional grid investments are anticipated.

Development of a smarter, more flexible and user-friendly energy system could save UK consumers up to £40 billion by 2050, according to recent research by Imperial College London and the Carbon Trust.

Central to the development of a smarter grid is better intelligence. To this end, the government is rolling out a smart meter programme that is expected to see every home in the UK equipped with a more sophisticated electricity meter as standard by 2020.

Andy Burgess, associate partner at UK energy regulator Ofgem, explains: “The smart meter rollout is a critical part of this, but it really is just an enabler to allow other things to happen. It’s a way of getting the right level of data so that consumers and service providers can use that data in different ways to provide new services.” 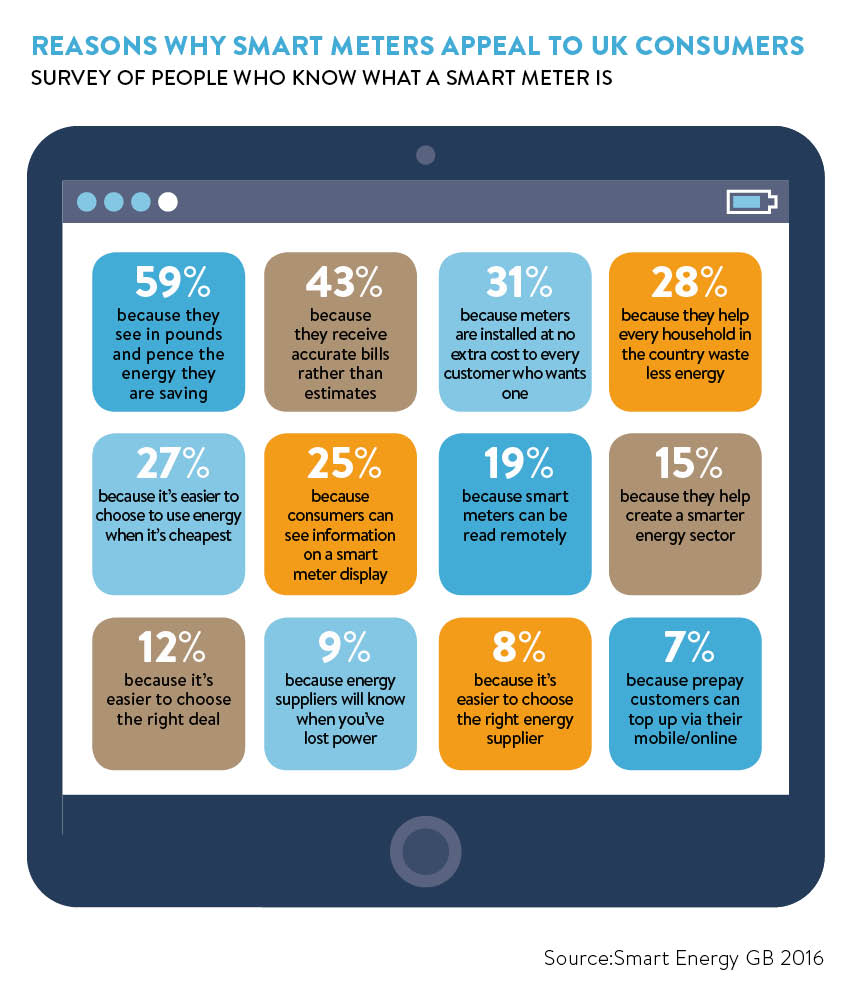 New approaches on how the UK manages its energy system are already emerging. The country’s tightening electricity system reserves – the margin between total supply and total demand – has seen the rise of demand-side management services.

Under such schemes, for a commercial return, large consumers agree to reduce their demand during critical periods so the energy can be used elsewhere. So-called aggregators also group together bigger volumes of this kind of available power to bid into the energy market more effectively. UK Power Reserve is one such company, which among other collective energy assets offers 215 megawatts of electricity storage, enough for a few thousand homes.

However, while this kind of flexible market activity has so far been focused on big industrial and commercial entities, which already have sophisticated metering in place, it is being explored at smaller scale too. For example, a Nottingham University-led community energy scheme in the city’s Meadows area is to trial selling and sharing self-generated energy. Some 37 homes are participating and will use communal batteries located in the area’s schools.

Dr Lee Empringham, principal research fellow at Nottingham University, highlights some of the benefits of smarter control of energy assets at community level. “We have a perfect example in Nottingham, where you’ve got a large PV [Photovoltaic] system on a school and for a significant proportion of the year, especially during the summer, there is no energy usage in that school. That energy could be redistributed locally,” he says.

“We can also store that energy throughout the day in their large energy store and then trickle it into the system at night making that community a ‘better’ energy user. The peaks and troughs of energy usage will be handled locally and not by the distribution network.”

Katrina Westerhof, research analyst at Lux Research Inc, picks up on another benefit of the aggregate capabilities of a smart grid. “We’re seeing more and more of the idea of a virtual power plant made up of residential batteries. Virtual power plants are something that we do see as near term. That can really have a lot of impact because it gives you a chance to create a revenue stream from these assets.”

A trial in New Zealand has gone one step further towards community-level smart connectivity. Local energy company Vector is to use an energy trading platform that will allow people to buy and sell excess solar power or storage directly to each other. Up to 500 schools, community groups and households will be taking part in the project from December using blockchain technology for their transactions.

In the UK this type of peer-to-peer trading has been trialled too, for business customers of renewable energy supply company Good Energy with a blockchain platform from Open Utility.

Unremarkable they may be, but the smart meter under the stairs, the solar panel on the roof, the electric vehicle and storage in the garage, and the smartphone in your pocket are all part of a thrilling, electric revolution.