Why is employee engagement important for UK businesses?

New data from the Office of National Statistics shows second-quarter productivity declining 0.5 per cent compared with the same period last year – also the fourth consecutive quarter of negative growth for labour productivity. It will do little to allay concerns that the UK continues to suffer not only significant and very serious productivity issues, but equally an employee engagement problem. This raises two questions, why is employee engagement so important and what impact does it have on productivity?

UK employees are now 27 per cent less productive than their German counterparts, which means UK plc is missing out on £130bn of potential economic output annually. 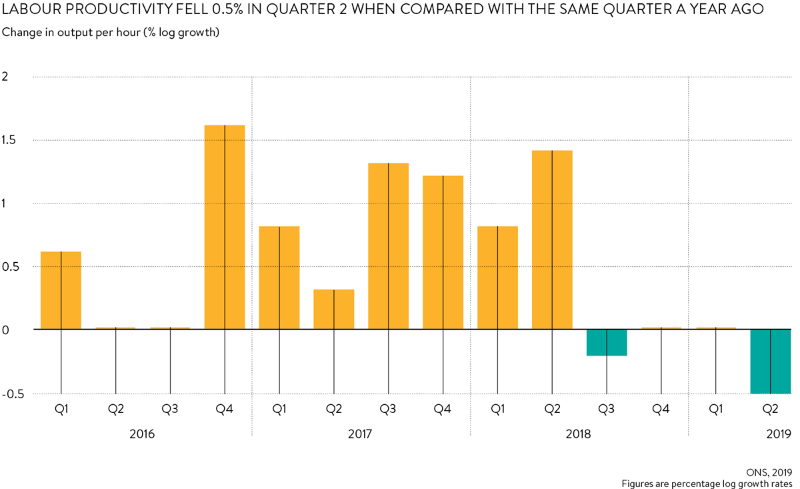 The UK productivity gap is so bad and has been so persistent that the government commissioned a study into it. Almost ten years to the month - David MacLeod and Nita Clarke published the now seminal Engaged For Success report. Its answer seemed simple: lost productivity was all about the wasted willingness of employees to go the extra mile, of untapped interest in their roles to stretch themselves. To solve it, said the report, all firms needed to do was create more ‘engaged’ employees.

The good news was that this simple-sounding solution spawned an explosion of new research that has categorically proven the engagement and productivity link. For example, data shows a 3.9 times earnings per share (or EPS) growth rate difference between top and bottom-quartile organisations with high employee engagement compared with low or average employee engagement. It also finds engaged employees boost productivity by 18 per cent and profitability by 12 per cent.

“No one doubts the sizeable levels of academic research that support the fact engaged employees are more productive employees,” says Matt Stephens, author of The Engagement Revolution. “Engaged employees really are those who perform at their best. And when this happens, they create additional business improvement metrics: reduced attrition, better customer experience, even reduced accidents at work.”

Numerous case studies prove this too in the real world. For instance, when US-retailer Best Buy improved its employee engagement levels by 10 per cent, the company found it increased profits per employee by $2,400 (£1,500).

But while employee engagement is often cited as the solution to productivity, it is still the case that it’s a word steeped with different connotations, creating different interpretations, which don’t altogether help human resource directors understand what contributes to it or has the most impact on it.

“It’s often forgotten that engagement is an ‘outcome’, not an input,” says Mr Stephens. “You can’t simply have an engagement programme. Lots of small things add up to creating the output of engaged employees. And this can make it difficult to assess which aspects to tackle first.”

These elements can include everything from the physical environment in which employees work, to the level of training and development they get. They can also include more intangible aspects, such as the sense that employers listen to employees or, increasingly, that they take employee health and wellbeing seriously. All of which can cause leaders to panic, says Cathy Brown, operations director at the Employee Ownership Association and former executive director at Engaged For Success.

But, she argues, that while good, they may not fully tackle underlying and stronger cultural aspects, which can often create ongoing active disengagement. Around 21 per cent of UK employees are actively disengaged, up to three times the number actively engaged, according to Gallup.

“Easy-to-introduce policies are what I call the transactional levers, but often they don’t go far enough,” says Ms Brown. “The real reason true engagement is a hard concept to crack is because it’s really about people and it’s about emotions, about how companies make their people feel. This can be quite exposing for leaders, because it makes engagement about how people bring their ‘best self’ to work and creating cultures that facilitate this. All this can make leaders quite vulnerable.”

According to Matt Manners, founder of the Employee Engagement Awards, tapping into people’s individual motivations is what helps unleash people’s untapped potential. “Psychological safety is what organisations need to create,” he argues. “Studies estimate only five per cent of firms globally offer this, so who knows how much untapped effort is lost through having disengaged employees? People only feel engaged when they feel attached to a company.”

The human need for safety

George Brooks, Americas leader, People Advisory Services, EY, says: “The biological need for safety is a feature of almost every species. Humans need a pathway that offers them the ability to flourish. And at EY we have identified eight human qualities that, when activated in the right combination, we believe are most likely to unleash the best of both individuals and organisations. These are trust, meaningful purpose, collective collaboration, imagination, resilience, happiness, compassion and transformative practice.”

Mr Brooks calls these qualities the “Great 8” and experts agree that, when organisations develop ways to speak to employees authentically and can also explain their purpose; authentic engagement is a natural and very powerful outcome, which can ride out even very turbulent times.

“It should stand to reason that when you give staff a voice, listen to them and when you react to what they’re saying, you get real emotional buy-in in return”

When Camelot appointed Andy Duncan as its chief executive in 2014, it was against a backdrop of restructuring and potential job losses. Yet, his open approach saw employee engagement rise by 10 per cent. How? By being honest and involved with employees. This followed through in how employees rated their leadership team as being open and approachable. They observed the company was living the values it espoused. The number of people who felt proud to work for Camelot actually increased.

Sitting at the core of the ‘Great 8’ is a simple truth: the factors that drive and engage employees are more substantial than crude performance indicators. These may be quite abstract notions, such as being able to work for a company that gives them clarity of mind, working with teams, working with particular leadership styles. But enterprises must organise themselves appropriately to better understand how and why all of these things matter.

”It’s strange,” says Mr Manners “to think that companies spend millions on understanding the behaviours, motivations and emotional drivers of their customers, but are sometimes reluctant to apply this methodology internally to their own employees, to see how they can best motivate them. It should stand to reason that when you give employees a voice, listen to them and when you react to what they’re saying, you get real emotional buy-in in return.”

“There’s a well-known story about how Boeing wanted to set up panels to listen to its employees about how it could save money. It really did see the fruits of giving employees a voice. It was employees who came up with creative solutions, because they were most closely connected with the product. They ended up saving $30 million in six months.”

Ms Brown adds: “Addressing how employees feel about their workplaces from an emotional point of view is key to unlocking engagement and therefore productivity. Engagement can really be quite a personal thing to different companies. The key is thinking about it holistically, deciding what the drivers of it are for your business and then doing something about it, and with a big dollop of authenticity too.”

What does this mean for UK organisations? It means employee engagement drives productivity and as Ms Brown concludes: “Engagement comes from employees having a cultural frame of reference they also buy into.” If UK businesses can start to get these things right, then engagement and productivity rises will go hand in hand.