Trying to make sense of the future, in the face of such significant change and disruption, can leave you sympathising with Alice of Lewis Carroll’s 19th-century writings.

We’re confronted with such a dizzying array of shifting macro-environmental forces and rapid technological advances that most of us struggle to keep up with, let alone decipher. We read of countless innovations and new possibilities that not too long ago would have been written off as the result of an overactive imagination or simply material for a Hollywood plot. 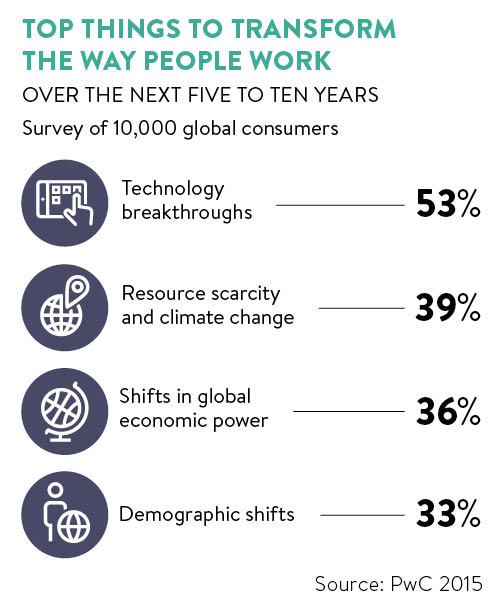 The reality, however, is that the relationship between technology and humanity is changing – fast. And it’s no longer a distant future but already here, shaping not just the way in which we live, but the way we work.

As Klaus Schwab, founder and executive chairman of the World Economic Forum (WEF), opens in his book The Fourth Industrial Revolution: “Of the many diverse and fascinating challenges we face today, the most intense and important is how to understand and shape the new technology revolution, which entails nothing less than a transformation of humankind.”

The implications of this question on the world of work aren’t something that can be left for policymakers or captains of industry to debate behind the closed doors of a Davos WEF summit. It affects all of us and its impact knows no limits. Disruption is being felt across sectors, geographies and all layers of an organisation’s workforce.

There are no shortage of questions facing those planning their careers and those planning the future of their organisations. Will meetings leave the boardroom in place of a virtual reality existence? Will the cubicle next door be occupied by a robot? Or will there be no cubicles, or indeed offices, at all? Will algorithms replace creativity? Will artificial intelligence eliminate the gambles associated with hiring decisions? Or will the concept of a full-time workforce be largely replaced with a portfolio of on-demand, virtual workers?

It’s undeniable that as business practices evolve and technology creates both new applications and new ways of working, the skills needed by organisations are changing, yet some warn that a widening skills gap has already been building over a number of years.

“In the UK the situation is continuing to worsen as employers struggle to match the roles they have with the available workforce, particularly acute in STEM [science, technology, engineering and mathematics] industries such as infrastructure and science,” says Alistair Cox, chief executive at global recruiter Hays. “Real work must be done in conjunction with education institutions such as incentivising students to enrol on courses in subject areas which are notoriously short on skills such as maths and science. In the short term we must make sure our immigration laws allow companies to bring in the best talent from abroad where it isn’t available at home.” 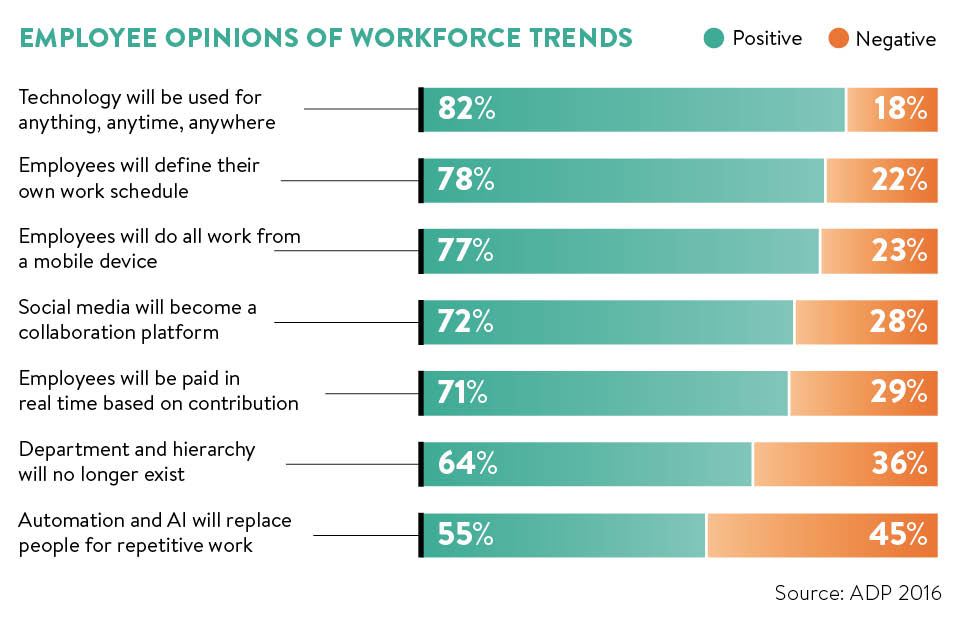 Meanwhile, it’s not just the skills an organisation will need to be successful that’s under the spotlight; technology is opening up new ways of working that are driving the need for a shift in culture and the recent launch of Facebook’s ‘for business’ product is a prime example.

“The future of work is going to be about breaking down barriers – geographic, departmental, linguistic, technical and more. This means we need technology that can connect everyone at a company, transcend language and time-zone differences, and all this needs to be done quickly, on the go,” says Julien Codorniou, global head of Workplace by Facebook. “In order to be successful, companies have to be able to connect everyone in their organisation, not just the C-suite and leadership or top managers or even all its knowledge workers. This means connecting every single person at a company including employees who don’t have desks, who’ve typically never been truly a part of their organisations before.”

Mr Codorniou points to examples such as Danone using Workplace to connect all 100,000 people in the workforce, including a third who work on factory floors and have never been connected to the company’s IT system or had a corporate e-mail, and Eimskip, a shipping and logistics company in Iceland using Facebook Live to connect with their ship crews from their bunks as they move commodities across geographies.

Society has survived three such upheavals before, and has emerged stronger and better each time

As organisations seize on the opportunities of greater speed, efficiency and accuracy, which emerging developments in technology promise, it’s inevitable that some roles, functions and ways of working will be significantly impacted or even wholly displaced, and not just manual roles, but also knowledge workers. Yet this doesn’t necessarily set the scene for an era of growing social, income and opportunity inequality.

“As humans, we have a long history of disrupting ourselves through better technology. We also have a very short memory,” argues Josh Graff, UK managing director at social network LinkedIn. “Advances in mechanical automation, transport, computing and mobile communications have made countless dangerous, tedious or labour-intensive jobs unnecessary. Instead of an ever-growing line of out-of-work labour, employment rates are roughly the same today as they were in the early-1970s. As human capital is freed up from low-skilled work, it’s able to move around the economy to where it can better add value.”

Fundamentally, it’s important to remember that while the coming years of seismic change and new paradigms may feel the most complex, challenging or profound for our generations, others have inevitably felt the same before us. After all, this is the fourth industrial revolution, not the first. Society has survived three such upheavals before, and has emerged stronger and better each time.

As LinkedIn’s Mr Graff urges: “Viewing inevitable change as a threat isn’t a successful long-term strategy. Embracing change as an opportunity to innovate and create new ways of working will always be a more successful one.”