The decline of cash?

Recent years have seen the emergence and rapid proliferation of cashless technology. Contactless cards and apps such as Apple Pay mean it’s easier than ever to pay in an instant. The massive growth of e-commerce has transformed Amazon, eBay and a host of other online retailers into some of the largest, best-known companies on the planet; it’s now possible to buy almost anything on a laptop or smartphone.

Across the developing world, ‘mobile money’, a form of cashless mobile payment, is spreading like wildfire. Companies such as M-Pesa allow users to deposit, spend and transfer money using an account on their smartphone. In some countries more people now have a mobile money account than a traditional bank account.

In light of these changes, it’s hard not to view crumpled bundles of paper and coins as relics of a pre-digital age. But it is important not to overstate the claim that cash is dead.

Worldwide, the significant majority of all transactions are still cash-based. A lack of a widespread or accessible cashless infrastructure (few or no point of sale terminals in stores, slow internet connections, the unavailability of broadly accessible financial products etc.) hinders many poorer regions, and where large numbers of people work outside the formal economy paper money is king.

Cultural factors, too, play a role. Though there is a correlation, the relationship between a country’s level of economic development and its use of cash is not perfectly linear by any means. According to a MasterCard Study, Germany and Japan have been relatively slow to transition away from cash due in part to the fact that low crime rates in those countries mean the risk of carrying notes is minimal.

All of this makes for an interesting picture worldwide. As the following charts show, we are well on the way to a cashless world. But we are not there yet. 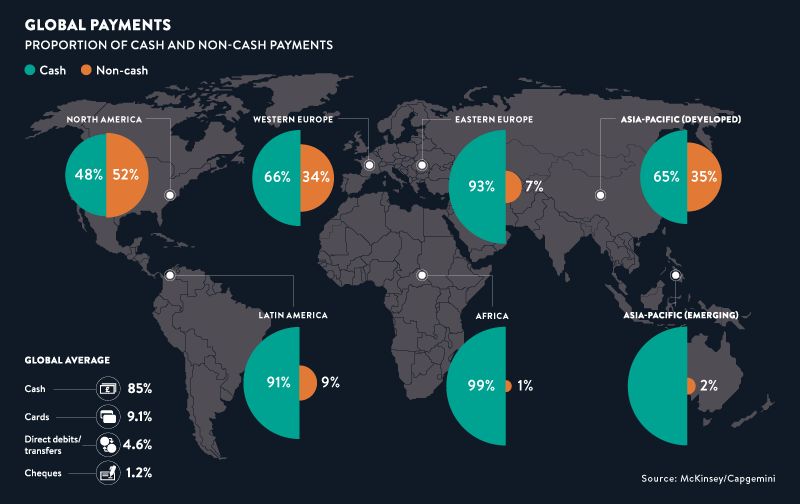 Over half of North American transactions (52 per cent) were cashless in 2015, a higher proportion than any other global region. Asia-Pacific’s developed economies, with a 35 per cent cashless rate, and Western Europe at 34 per cent, are second and third on the list.

Across the rest of the world the picture is very different. There is not a single other region where more than one in 10 transactions is cash free. In Africa, the region most dependent on hard currency, only 1 per cent of transactions are cashless. 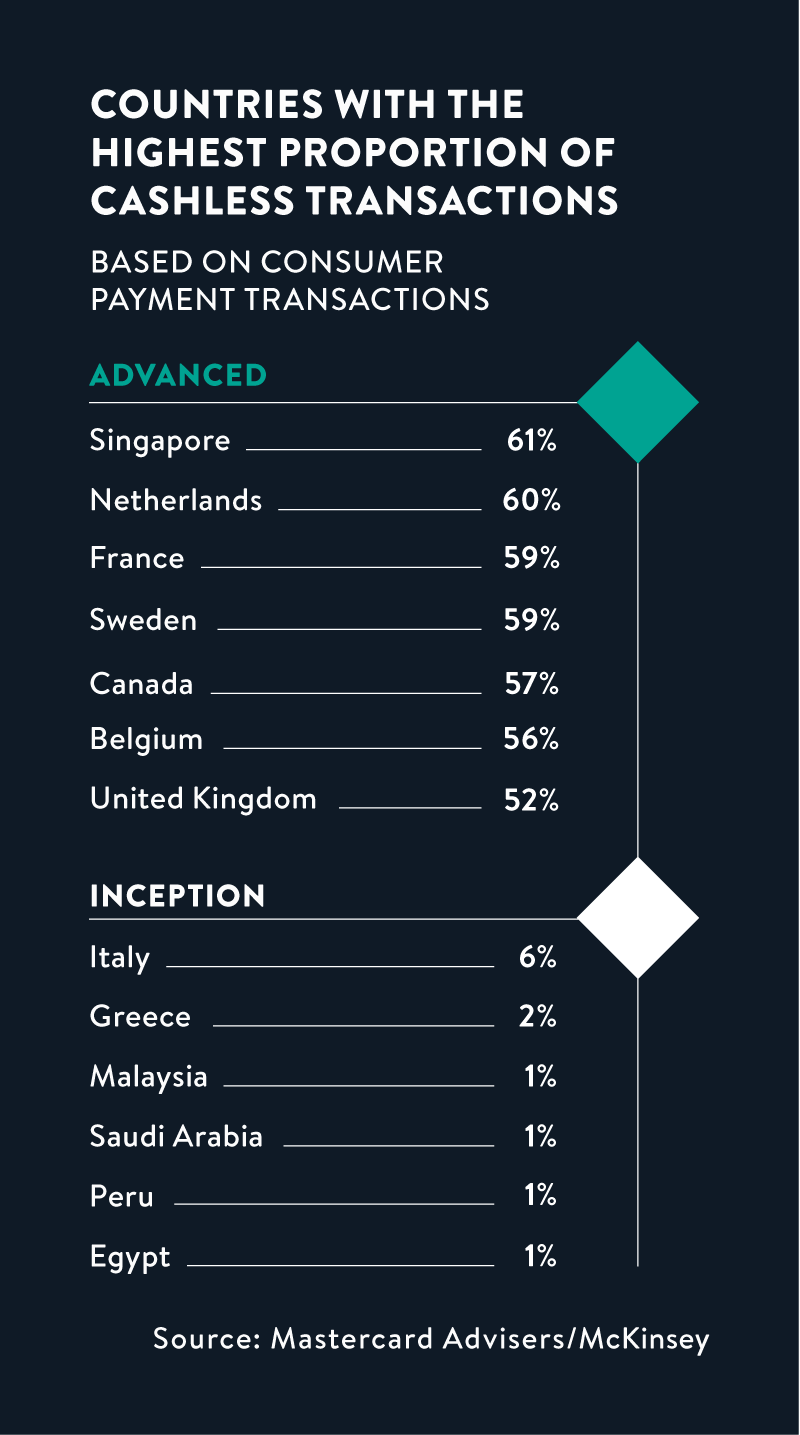 Big differences exist between nations, too. Singapore boasts the highest cashless transaction rate of any country in the world (61 per cent), followed by the Netherlands (60 per cent), France and Sweden (both 59 per cent). The UK, where 52 per cent of transactions are cashless, is in 7th place.

The contrast with countries at the other end of the scale is a stark one. In Egypt, Peru, Saudi Arabia and Malaysia only around 1 per cent of all transactions do not involve cash.

There are some notable European inclusions towards the bottom of the chart. Greece and Italy both remain heavily dependent on cash, with only 2 per cent and 6 per cent of consumer transactions in these countries cashless respectively.

Between 2009 and 2014 the total value of cash-free transactions worldwide increased by almost half, from £269bn to £389.7bn, according to research by Capgemini.

Increasing financial inclusion rates globally, widespread adoption of contactless cards and the spread of cashless mobile payment systems in developing and emerging economies mean this trend is predicted to accelerate.

For the moment, though, cash continues to be used in around 85 per cent of global consumer transactions. It may be on the decline, but it remains the most commonly used payment mechanism in the world.

See more from our Future of Payments report