Transformation isn’t just about being a forward-thinking company for the sake of appearances – it has a direct impact on the bottom line, and the long-term viability of your business

In 2004, at its peak, Blockbuster had more than 9,000 stores and up to 60,000 employees. But it went bust and today, after a drawn-out decline, the home entertainment rental company barely exists at all. It’s just one high-profile example of how a powerful business can crumble in the face of forward-looking, digitally-enabled competitors. A new generation of companies led by Netflix is now doing what Blockbuster did, but better, and with lower costs, unlimited inventories and less friction.

It seems strange that no one at Blockbuster saw this coming, but the data suggests that many of today’s businesses have learnt the lessons that might have saved it. For 27 per cent of respondents, securing the long-term relevance of the organisation now sits at the top of the agenda in terms of boardroom and management priorities, as compared to three years ago. On top of that, 46 per cent take the view that “it is becoming increasingly evident that we have to make this key.” A mere 8 per cent said the issue wasn’t a major concern (below). 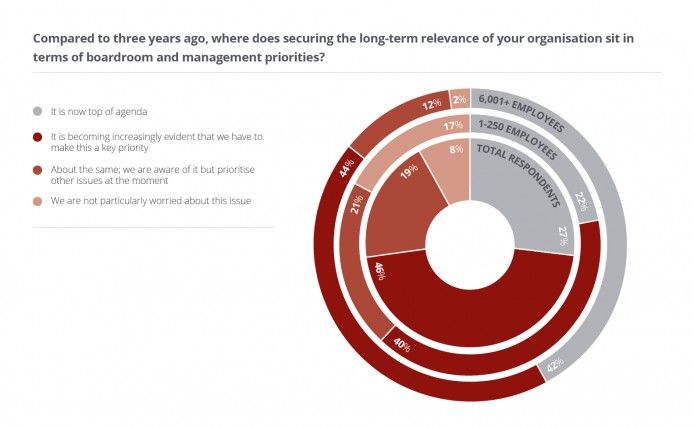 Maybe chastened by the demise of Blockbuster and others, it is large businesses – with more than 6,000 employees – that are most focused on securing long-term relevance. Some 42 per cent have put it at the top of the agenda, while a further 44 per cent indicated that evidence in support of prioritising the issue was growing. That combined total of more than 86 per cent overshadows the proportion of the smallest businesses (with fewer than 250 members of staff) who also put themselves in one these two camps (62 per cent).Some 39 per cent of respondents view “not enough funding” as a significant barrier to forming a robust business transformation strategy, making it the most widely encountered obstacle (below left).

However, according to Monica Parker, Director of Workplace at Morgan Lovell, the assumption that all kinds of transformation require major financial investment doesn’t always hold true. “That’s absolutely critical to recognise,” says Monica. “Most businesses have cost constraints. So, what are the primary things that they should do? Create an environment where their staff have a degree of autonomy. Create an environment where people are not chained to their desks, but are able to move within the work setting, empowered by technology and the mobility tools that allow them to do that. Most importantly [they should create] a culture where people feel they can be authentic in their whole selves, but also where they feel they don’t have to be present, banishing that sense of presenteeism in an office. And that doesn’t have to cost anything.”

The second most frequently mentioned barrier to transformation is a “cultural aversion to change,” which was mentioned by more than a third of businesses and by almost three quarters of Traditionalists. It’s self-evident that stubbornness and being stuck in a certain way of doing things can hamper attempts to be progressive, but it’s important to realise that business transformation doesn’t have to look the same for every company; inappropriate goals coupled with a one-size-fits-all approach is an unlikely recipe for success, especially if it isn’t built on a firm foundation.

As Monica Parker points out: “Perhaps somebody says: ‘I want a work environment that’s like Google and I want to put in all these great collaboration areas that are going to make people work together in a fundamentally different way.’ But if you don’t create a degree of cultural alignment within the business, you’ll put these great settings in that no one will use.”

Of course, a business identifying itself as “transformational” and “forward-thinking” might enjoy a number of attendant benefits. But in order to bring about change in the first place, it’s likely that a forceful business case will have to be made by someone within the organisation. 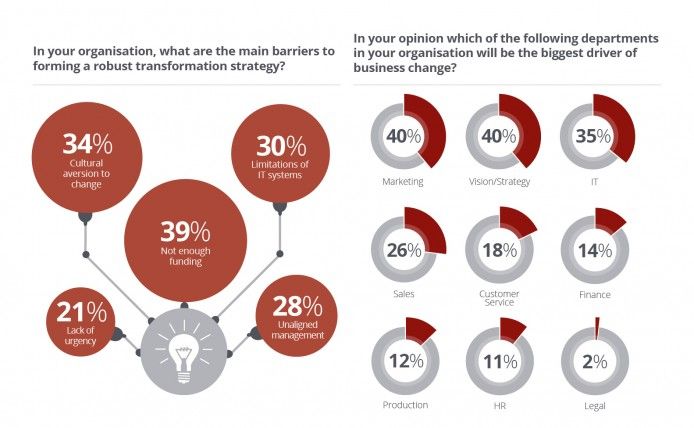 The IT department completed the top three, beating sales into fourth place (with 35 per cent and 26 percent respectively). With marketing on par with management in terms of leading organisational transformation, it’s worth noting that market research firm Gartner has predicted that by 2017 CMOs would be spending more on IT than CTOs .

On the face of it, these responses might come as a surprise, but the data about the drivers behind the need to transform businesses bears them out (below left). At 55 per cent, the most popular response (and ranked in the top two by almost two thirds of respondents) was “customer experience – providing an effortless experience that drives engagement and loyalty.” This concern falls into the domain of marketing departments and fits neatly with the fact that “responding more rapidly to market opportunities” is ranked as the change that could have the biggest impact on an organisation’s profitability (below right). 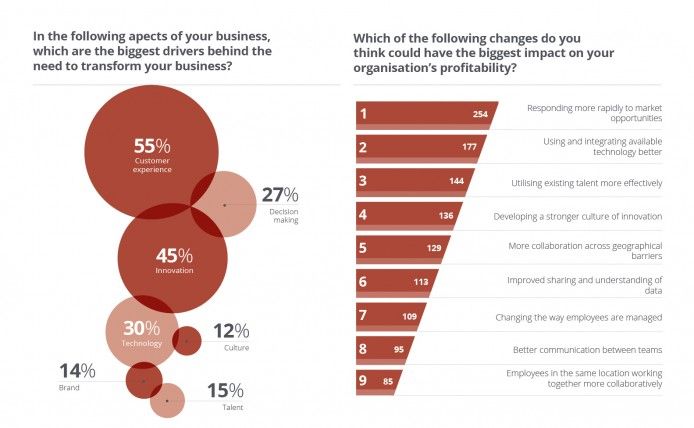