The airlock opened as the engineer’s head-mounted display sprang into life. She walked over to the machine bay to examine the day’s tasks. The headset displayed the engineer’s normal field of vision, but every turn of her head peppered the screen with a flurry of live-streamed text and annotations describing alerts and operational instructions. “These augmented reality (AR) instructions tell me where to go and how to fix things, but they never tell me how to fix a good baloney and pickle sandwich,” grumbled the engineer, before getting on with the maintenance tasks assigned for that shift.

Back in central control, the Motherbrain quantum computer analysed the engineer’s progress and switched tasks from core upgrades to longer-view predictive maintenance operations. With so many internet of things sensors now in place around the manufacturing shop floor, it was easy to apply data analytics to the plant and fix the machine that was about to break, rather than the one already out of action.

Humanity has to move on to this next step, both in the workplace and elsewhere

This is not some dystopian vision of the future or a reinvention of Terry Gilliam’s 1985 film Brazil; this is how augmented reality is set to be applied in modern industrial manufacturing environments. So what will the next manufacturing workforce look like when AR begins to intersect with robotics and drones? How instrumental will augmented reality be in achieving a truly smart factory? Just how close to steam-filled airlocks and bad baloney sandwiches are we?

Augmented reality still has a way to go before widespread adoption

Mr Braddom claims real-world operational requirements are stringent and must meet high standards for safety regulations, toughness, long battery life and allow a full range of vision. Also, while there have been some large-scale deployments in the last 12 months, widespread adoption will need the low latency and network capacity of 5G to become commonplace.

Jacques Delacour, optics and virtual reality business line director at engineering simulation software company Ansys, concedes that most traditional factory floors still have information displayed on dials, screens or paper. But he says, despite the not-quite-there-yet factor, AR’s ability to put instructions directly in the field of view of the operator or technician is a future certainty.

“Working hands free on technical manufacturing tasks will be key. Some mounting operations can only be performed when an engineer’s hands are placed in a very specific way. This direction is very complicated to explain on paper, but is very easy to display in 3D,” says Mr Delacour.

Ansys has been able to start developing the use of digital twins. These are software-based representations of working manufacturing equipment that can be brought to operational life in 3D video. The company says all information in a device can also be physically simulated, whether it is moving parts, fluids, temperature, ergonomics and so on. Analysis of this virtual twin can be used to make the operations of the technicians and operators safer and more efficient. 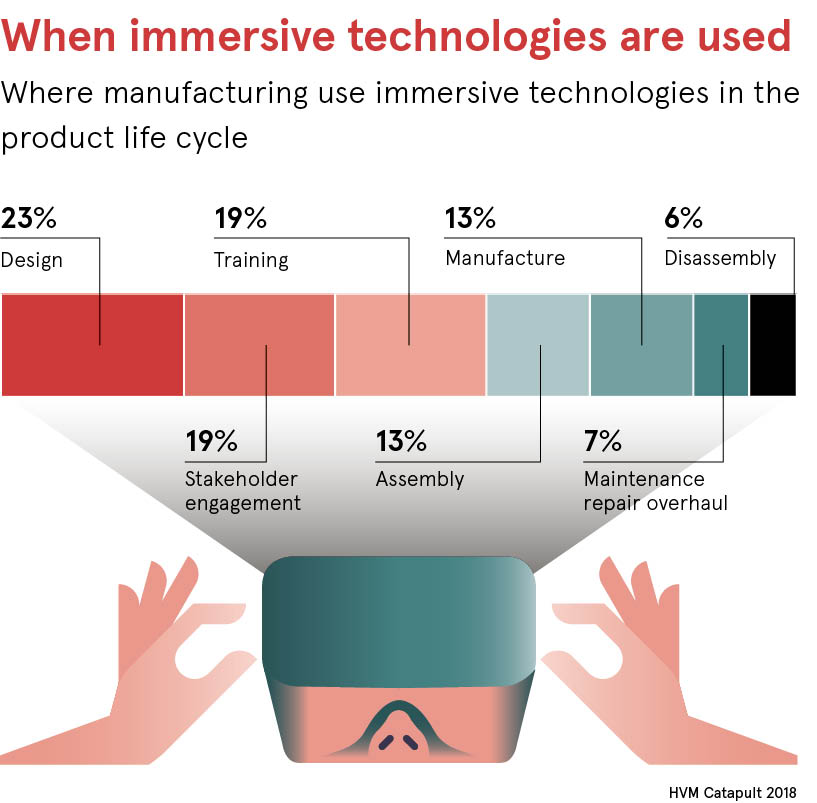 Jens Roehrich, director of the HPC Supply Chain Innovation Lab at the University of Bath School of Management, envisages a near future when manufacturing professionals will be able to take photos of parts and assemblies they are inspecting to contrast and compare these to images provided by the company’s suppliers via AR. Any discrepancies can then be much more quickly highlighted.

Professor Roehrich points out that, properly applied, augmented reality in the manufacturing space can provide quick access to inventory information, lead times and specifications, which can be summoned in real time without disrupting the flow of production. This will help to cut production downtime and also minimise errors.

Data is significant. “The limiting factor for the adoption of AR in manufacturing isn’t just related to factors such as the visualisation technology, it’s also restricted by data management systems,” says Julian Saunders, chief executive and founder of personal data governance company PORT.im. “Data that is highly accurate and delivered in real time underpins AR. Put simply, any AR system is only as good as the information that fuels it.”

Mr Saunders points out that this is especially true in manufacturing where quickly and accurately ascertaining the location of a component and its provenance, the health of factory equipment or the efficiency of a process requires the collection, management and analysis of scores of data streams. As a result, he says, industrial augmented reality will now evolve hand in hand with the development and adoption of data management systems and the advancement of data science techniques.

Evgeny Chereshnev, chief executive and founder of biometric wearable technology company Biolink.Tech, concludes: “Our first use of AR in manufacturing is like the invention of the microscope. The microscope opened up a whole new world for us that already existed, but had remained hidden. With AR, people will start to see the ‘data layer of life’; they will be able to see statistics and characteristics of real-world objects in real time. Humanity has to move on to this next step, both in the workplace and elsewhere.”