Smart cities are already with us. We have already brought huge advances to the way we manage our civic utilities with software-based intelligence to control civil engineering infrastructures. This insight allows workers in white shirts and ties across operations departments to perform predictive supply optimisation for us.

We can already control traffic flows with cameras and smart traffic lights that have a degree of computer reasoning power. We also can construct buildings with smart meters for power monitoring and the ability to run subdued lighting in unpopulated zones. All this has happened, already.

Further still, we can now build new city areas using geographic information systems (GISs) from organisations such as Esri to create 3D mapping plans of everything from skyscrapers to parklands. Using data rich 3D maps of buildings, factories and homes, we can use computers to create so-called “digital twins” of rooms, power plants and the turbines inside them, or whole airports.

These digital twins are working visualisations of the real world, programmed to exist in the correct context of their physical existence; for every smart city, there is a software-based version of it sitting on a computer server. This is the bleeding edge; this is happening now.

So if we already have plastic solar-powered palm trees that pump out wifi (Dubai did this already), then where can smart cities possibly grow next? Where we will we be by 2030? Is it a question of digitising our entire existence?

“As we establish this new era of smart cities, it is fundamental that we understand what has happened at the infrastructure level. In the new digital economy, almost every aspect of business becomes defined as a service,” says Mr Pope.

He illustrates the reality by explaining that a firm’s phone system is now a digitally provided IT service controlled by computers. The amount of food ordered for the staff canteen can also be defined as a controllable IT service. The amount of air pumped through the office air conditioning system is run by an app — and so becomes an IT service that we can turn up, or down.

“When we understand this new approach to codifying and defining our business assets, then and only then can we start to be smart about the way we tune our smart cities for the greater good,” Mr Pope says.

So is all that data going to be good for our health?

If it is, then shouldn’t we be able to create a smarter and healthier world as well? We know that the world population is likely to rise by 50 per cent in the 21st century and reach around 11 billion by 2100, so shouldn’t smart systems give us a means of all controlling our own wellbeing better in the wider realm of digital smart city healthcare?

“It’s only a matter of time before the data society produces has a profound effect on our level of healthcare we receive, what we eat and how we feel and act as human beings,” says Nathan Berkley, chief executive of connected fitness platform company Muhdo.

Mr Berkley is suggesting that the smart city of 2030 will be designed with sympathy for our human epigenome — the array of chemical markings that surround our DNA and its protein scaffold. The epigenome’s pattern acts like a chemical program to tell our cells which genes to express and which to keep silent. This in turn means that identical strands of DNA can develop into different specialised types for different tissues.

For every smart city, there is a software-based version of it sitting on a  computer server

In simple terms, the way you eat, sleep, exercise and behave can have an impact on the way your DNA develops. With the rise of the wearable fitness trackers and the amount of data we all capture and share relating to our behaviour, activity and mood, it’s reasonable to suggest that healthcare providers in smart cities will soon plug into epigenetics.

“We are already taking this a step further with DNA sequencing and epigenetics markers as personalised health and fitness becomes a reality,” says Mr Berkley. “In the smart city of 2030, healthier people could pay lower insurance premiums. Muhdo is building a machine learning and big data platform based upon an underlining foundation of science to change the way we live.”

It’s not just about data

The trends for future development are clear. We are digitising the world around us into binary 1s and 0s, as we — the humans — are also now forming part of the new big data layer. Does this mean that the data-driven city of 2030 is some kind of guaranteed smart utopia then?

Not at all, there’s no easy win for smart cities, according to Hitesh Babhania in his role as industry value engineer for German data analytics firm at SAP. “The value of data alone is negligible,” he says. “Local governments require access to the technology which can effectively harness, analyse and deliver insights. In the UK, as with many other developed economies, complex legacy IT systems pose a major challenge to implementing these solutions.”

Mr Babhania suggests that London, for example, could never fully emulate Nanjing in China with its intelligent traffic system. This Chinese mega city was able to start from a blank canvas and build models in which technology enables major advances in areas such as congestion and traffic management.

Ultimately, construction of the 2030 smart city and beyond comes back to the same single word much beloved by city planners for the last half century — planning. Some of what we can achieve by 2030 is straightforward augmentation and enhancement of our existing city infrastructures. Other aspects will require a “rip-and-replace” approach. Defining the shape of our next smart city building blocks is where we are at now, so please expect some drilling, a few extra tall cranes and the occasional whiff of rubble. 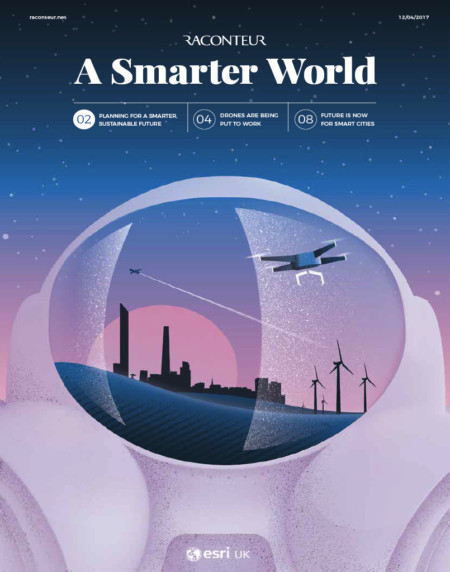 Planning for a smarter world

How drones are being put to work

Also in A Smarter World