China is in the third year of its war on pollution to reverse the damage done to its skies, soil and water through decades of unfettered economic growth. Yet so far its actions seem to have had little effect.

Last December in Shijiazhuang, for example, levels of PM 2.5 (fine particulate matter in the air) were reported at 1,000 micrograms per cubic meter, against a World Health Organization (WHO) guideline of an annual average of no more than 10 micrograms. According to the Xinhua State News Agency, flights were grounded and highways closed due to heavy smog across a number of northern regions.

China’s smog is a significant and growing problem as air pollution has been linked to increased incidences of cancer, heart disease, stroke and respiratory illnesses. China has the most deaths from air pollution anywhere in the world, according to a WHO report, at more than one million in 2012.

As David Wright, director at Turquoise, points out: “Air pollution is not the only issue, however, as water and soil contamination also needs much attention. It is harder to quantify the amount of contaminated water and soil, but one estimate states that one fifth of the country’s arable land is contaminated, creating fears for food security. The population and scale of China mean that there will be no quick and easy solution.”

China’s pollution problem is predominantly driven by coal-fired energy consumption and automobile use. Mr Wright says: “The government has sought to tackle this problem in a multi-pronged manner, through capping overall national energy consumption at 5 billion tonnes, a commitment to spend 800 billion yuan (£93 billion) on rail transport and investing heavily in electric vehicle technology.”

Unfortunately China is also in the middle of the world’s largest urban expansion – it is even developing two cities intended for 100 million-plus inhabitants.  Thirteen out of fourteen existing megacities are in China already and more are expected by 2030.

The implementation of smart technologies, such as data analytics, machine-learning and cyber security, to underpin a city’s infrastructure and services, including transport and utilities, can have a huge impact on social and economic goals. But smart is just a means to an end. As Amanda Clack, EY head of infrastructure, says: “You’ve got to build cities that people want. It’s important not to build more of the same, but build in adaptive technology and make sure you create a place where people want to live.”

Despite the 2014 environmental reforms, which included the use of traffic restrictions on days of high pollution and curbs placed on industries that burned coal for energy, the problem continues.

In 2016, the Chinese government released its 13th five-year plan outlining specific environmental goals, including an 18 per cent reduction of days where the level of PM 2.5 is above acceptable limits. The situation is sufficiently critical that new reports suggest China is considering forcing steel and aluminium producers to cut more output, banning coal in one of the country’s top ports, and shutting some fertiliser and drug plans.

China is also experimenting with other approaches. Meixi City in Hunan Province is one of the world’s biggest experiments in urban design and is expected to consist of a series of neighbourhoods holding about 10,000 people, each separated from one another by “green buffers”. It will include collective grey (used, non-toxic) and black (contaminated) water systems, distributed energy plants, and widespread urban agriculture.

Such approaches are hard to implement in tier-one Chinese cities such as Beijing and Shanghai, where populations of 20 million-plus people are driving and living every day. Implementing city-wide solutions in such large and complex locations can be difficult. As Ms Clack points out, the population of Shanghai, at 24 million, is the same as Australia.

China also has many second and third-tier cities, still large by European standards, that have been newly built and require infrastructure such as public transport. For these cities, smart city solutions can be more easily installed as part of a new and necessary public substructure.

Ms Clack says that there has been an increased interest in mid-tier cities and the UK is seen has having taken successful action in this area from the Clean Air Acts to London’s congestion charging and regulation around smoke emissions. As with everything else, when China takes an interest, action follows fast.

Mr Wright says: “Working with the ZTE Corporation, the Chinese city of Yinchuan is one of 200 pilot smart city programmes and a blueprint for scores of urban metropolises across China.”

Some of the smart technology being trialled includes bins that compress rubbish and notify local authorities when they are full and ready for collection; street lights that automatically turn off unless motion is detected, reducing energy consumption and light pollution; paperless administration procedures reducing the need for print materials; and groceries ordered on an app and delivered to a refrigerated central collection locker or even to a personal climate-controlled mailbox, reducing the need for journeys. 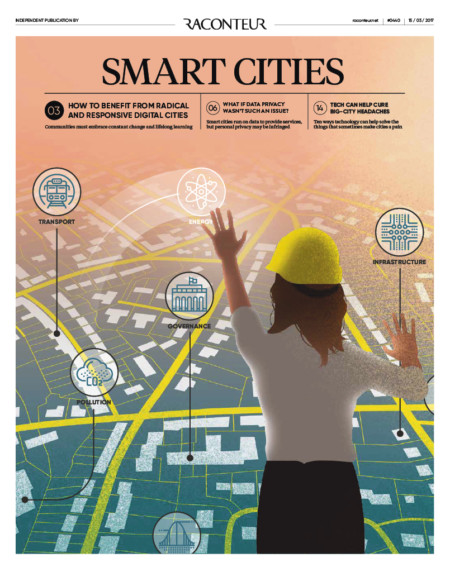