It’s complicated, expensive and will probably take twice as long as planned. But implementing the internet of things (IoT) in business is a wonderful and worthwhile adventure.

Rather than just admit it’s difficult for big businesses and small enterprises alike, it’s worth digging into just what exactly the IoT challenges are, how they’re slowing down adoption and whether unrealistic expectations play a role.

Firstly, connecting devices and operations takes time, lots of it, and it’s a very common hurdle to overcome. The quip about it taking two times longer? That’s based on research firm Gartner’s estimates that in 2018, 75 per cent of IoT projects will take up to twice as long as originally planned.

Rainer Schroeder, chief sales officer at Nexiot, which delivers an end-to-end, sensor and software solution for freight logistics and supply chain management, says: “The pure rollout of IoT sensors takes two to five years. Especially in the beginning, when only a limited amount of assets are equipped with IoT sensors, there are very limited benefits. Projects with a two-to-five-year horizon aren’t sexy.”

Next, the cost. IoT deployments can involve costs of between $10 and $50 a sensor, with mounting prices and Mr Schroeder estimates that most large-scale environments require budgets of $ 1million or above for IoT projects. Such budgets require executive approval and this involves an entirely different set of IoT challenges, notably the lack of expertise and confidence among business executives and board members when it comes to complex deployments of machine or IoT technologies.

“Challenges can be multi-fold, from not knowing where to start, to lack of internal expertise and resource, and the complexities of driving deployments securely,” says Rob Sheppard, UK IoT director for Intel. Mr Sheppard adds that IoT is now increasingly a board-level discussion and there is probably an over-emphasis at this level on bottom-line operational cost-savings.

IoT challenges are so numerous because of its business transformation potential

There are a number of reasons for this, including the expectations of business leaders. Sanjaya Ranasinghe, director of product in Europe for WiredScore, the company behind the international digital connectivity rating Wired Certification, says the speed of the consumer market may play a part. “Most IoT user experience is from smart-home tools such as those from Google, Nest and Amazon,” he says. “Enabling these forms of automations and integration in the corporate environment is not the same.”

What binds all these different IoT challenges together is the scale of transformation IoT can have on business operations. It’s complex, costly and long term, and so requires a sometimes decades-long strategy and much expertise to make it successful. That’s where proof of concepts, trials, standards and case studies come in. 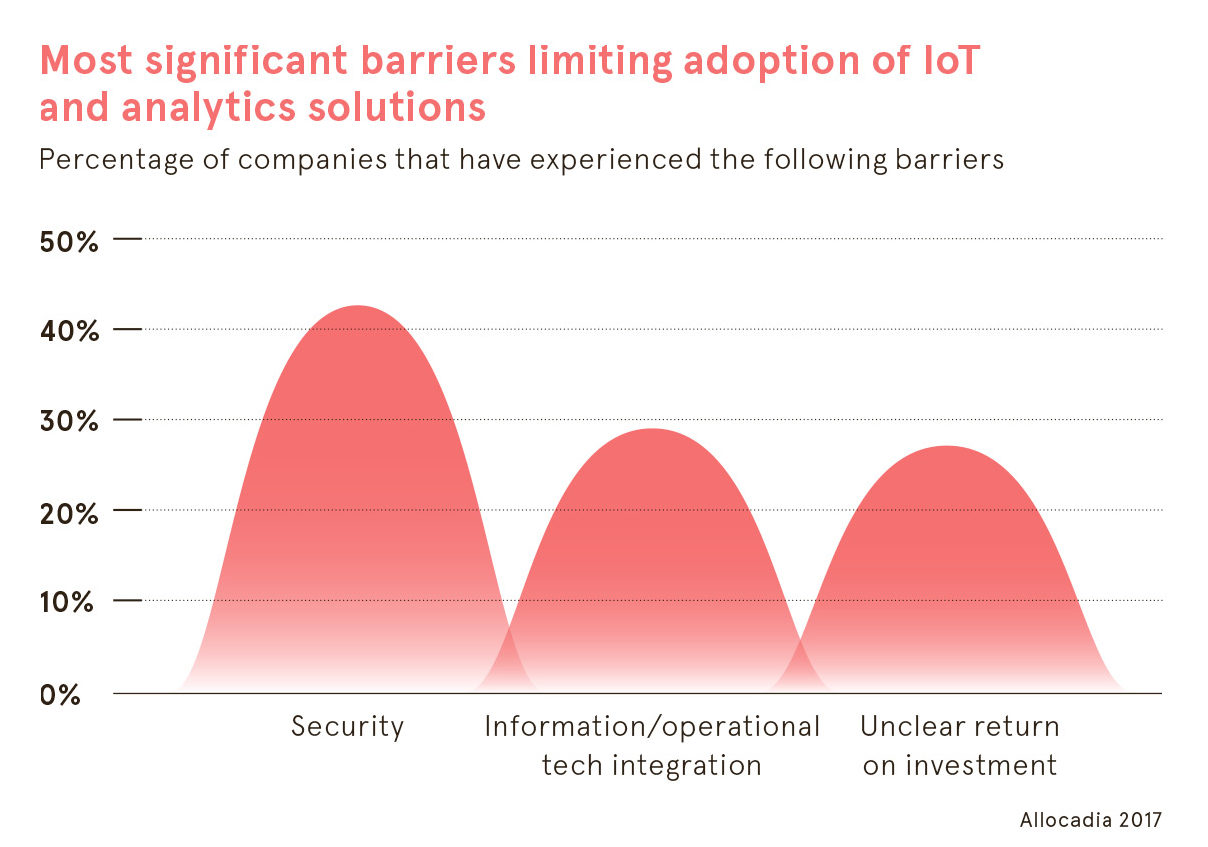 More case studies and trials are needed to reassure leaders

Nexiot’s Mr Schroeder says the whole industry needs to work on case studies and benchmarks on how IoT deployments can generate benefits. In the freight sector, for instance, the Technical Innovation Circle for Rail Freight Transport in Europe has created a resource for rail freight operators to calculate the benefits before implementation.

“We’ve found that many companies are approaching integration by enabling new business models based on various new factors, such as connectivity, apps, security, big data and artificial intelligence,” according to Telefonica. “Most customers will start with a proof of concept or trial of our O2 Smart Compliance Solution.”

This productivity and compliance product is designed to be flexible and assist businesses in the digital management of processes and compliance with real-time insights, bespoke to each location. One example of a case study is ScotRail which, Telefonica reports, was able to meet the Department of Transport’s complex and demanding legislation criteria as a result of the implementation.

Security and privacy concerns must be a top priority

While IoT challenges for enterprise are largely separate to consumer smart-home tech, the one similarity is concerns of privacy and security remain. “The key to addressing both is a proactive rather than reactive approach to these matters,” says WiredScore’s Mr Ranasinghe. “Developing policies for both these matters, for all new IoT devices under consideration to be tested against, will maintain the integrity of the network and ensure user expectations are maintained.”

It’s a problem that the whole IoT industry is working to address. “IoT sensors generate tons of data,” says Mr Schroeder. “Every IoT project thus collides with data privacy concerns: ‘Is my data secure or can my competitor do espionage? Who owns the data? Am I allowed to track an asset or does this tracking indirectly also track human beings, for example the truck driver?’”

Intel’s Security Essentials and Service Onboard were built specifically to enable security professionals to protect the platform and data it generates, essentially acknowledging how much of a barrier this issue of trust in the technology can be in enterprise.

“With the number of connected devices set to reach 26 billion by 2020, the number of potential attack points is staggering,” says Mr Sheppard. Intel has also been working with Sogeti High Tech, a subsidiary of Capgemini, on an end-to-end solution of hardware and software that is pre-validated for interoperability. “They secure the entire IoT ecosystem, from edge to cloud and offer a path to IoT security accreditation,” he says.

So when it comes to rolling out IoT enterprise-wide, there are almost as many strategies as challenges. Some companies trial ideas with existing operational staff, others bring in third-party integrators to define the deployment from proof of concept. 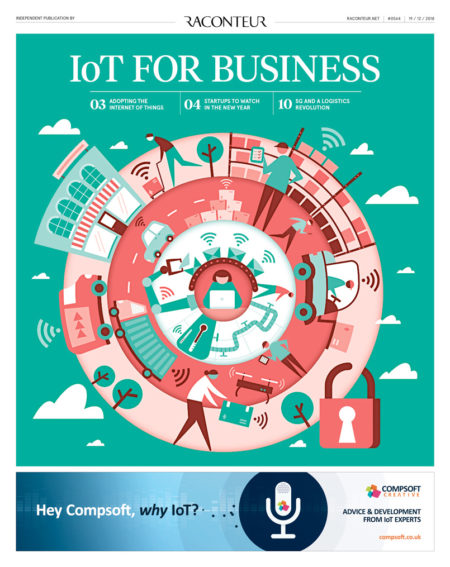