Back in 2015, film director Sir Ridley Scott was overseeing the The Man in the High Castle for Amazon and Ryan Gosling in the Blade Runner sequel. Sir Ridley has always experimented with new technologies – he was an early supplier to Amazon’s streaming service – and decided to take a look at virtual reality (VR) as a possible creative medium.

“The problems were complex,” he explained shortly afterwards. “It’s hard to focus on a story when you have infinite choices, and fast cutting and editing make people feel queasy. I’m not sure it’s the best storytelling medium.”

The following year, there was a rush into VR from games companies, documentary makers and artists, but since then, VR penetration has slowed down. There are signs, however, that extended reality (XR) – VR and its more accessible cousins augmented reality (AR) and augmented virtuality – could find a more natural home in the business world.

Accenture’s Technology Vision 2018 survey found that more than 80 per cent of executives believe XR will create a new way for companies to interact, communicate and inform, while 27 per cent say it is very important for their organisations to be a pioneer in extended reality solutions.

And yet growth has been slow for both. “The consumer sector and the enterprise sector have experienced similar amounts of growth, but the majority consensus is that this growth has been weaker than hoped for consumers category,” according to Simon Portman, technology lawyer at Marks & Clerk. So what are the five biggest barriers to entry and how easy are they to overcome?

“There are more than eight different VR/AR platforms that developers work on, with no clear leader in sight and no concerted effort towards standardisation,” explains Thanos Malevitis, Accenture Strategy’s managing director for technology, communications and media. “Major platform companies with advanced software, hardware and content capabilities may be able to go it alone by taking advantage of ‘winner takes most’ platform dynamics, but others will need to work together in robust ecosystems to overcome the lack of standards and realise the full potential of their investments.”

There is an OpenXR initiative from the likes of Oculus, Vale, Unity, Epic, Samsung, Magic Leap and Google, among others, which aims to develop a cross-platform VR standard so applications only need to be written once to run on any VR system. Until the standard is in the market, purchasing decisions on extended reality may be held up.

Currently VR and AR headsets are bulky and expensive, tethered to specific platforms and unable to display realistic pictures. This has alienated consumers and hindered the development of business-to-consumer XR. Again, AR is performing better than VR in this area. Solomon Rogers, founder and chief executive of immersive content specialist Rewind, cites German lift manufacturer Thyssen, which has deployed mixed reality HoloLens for its technicians as it “has so many different models of lift that not every technician knows every lift”. He explains: “They can look at a lift and navigate fixing it with a feed back to base.”

Although in a market with no clearly defined leader, even Microsoft HoloLens has issues with convenience and price tag, which lowers the chances for widespread corporate use, according to Andrew Makarov, head of mobile development at MobiDev. The answer might be right under our noses as mobile phones are proving successful at delivering AR, although with VR they’re less consistent.

Ironically, there’s already evidence that the smartphone itself will disappear as extended reality spreads. In the future, phones will be smart wearables, like earbuds that have biometric sensors and speakers, or rings and bracelets that can sense motion, and glasses that record and display information, according to Amy Webb, founder of the Future Today Institute.

For consumers, lack of content has proved a huge problem. “Oculus Rift rushed into its huge investment in hardware, but when the headset launched, there was almost no content,” says Rewind’s Mr Rogers. “Oculus is spending $0.5 billion into content, but the killer app isn’t clear. There are only a few companies right now that know how to make good extended reality content and, for professional developers, it may not be worth their time or budget relative to the installed base.”

Mr Rogers believes AR, which overlays virtual images on to the real world, as with 2016 sensation Pokémon Go, is likely to spread faster than VR in business to consumer thanks to its ease of use and existing content. “There is a sense that businesses are looking for use-cases; IKEA has a furniture app that’s brilliant. I can put chairs in every corner of my room,” he says. “But that’s not enough of an incentive for a consumer to invest.”

The forthcoming Harry Potter Wizards Unite AR game, in which players find objects, fight each other or unite to defeat monsters, will be an important demonstration of potential.

“Microsoft’s HoloLens is working with developer Black Marble on truServe, a scene of crime investigation app,” says Mr Rogers. “It allows you to overlay clues, keep track of what you know and place virtual markers or gather multimedia evidence without disturbing the physical scene and potentially tainting evidence. It’s a little like a crime scene investigation game, so as developers see what Harry Potter can do, they will take inspiration for business uses.”

This is film-maker Sir Ridley Scott’s problem: when the eye isn’t targeted to just a small range of viewing, but can rotate 360 degrees, designers have to adapt to an entirely new way of creating things. Designers need to get a 3D game engine, learn how to sculpt, animate and rig complex things when they actually want something that’s easy to use in a familiar environment.

“It’s about internal buy-in,” says Gareth Coombes from the Cambridge Strategy Centre. “People don’t like change. Innovation tech companies have to find internal stakeholders to prove they have to spend some money to make some money.”

Software and devices used across industries will have to be optimised for 3D experiences, explains Accenture Strategy’s Mr Malevitis. According to the XR Industry Survey 2018, potential adopters are deterred by the lack of proof of return on investment, and the challenge of integrating the technology with existing systems and processes.

“In most cases the benefit of XR is measured on user experience, which is difficult to quantify and compare against costly software and device investment,” Mr Malevitis explains. “Unlike cloud-based solutions or analytics and machine-learning, the business case is less tangible.”

“Virtual hosts are probably the biggest building block of Sumerian that’s obvious right now,” says Amazon Sumerian’s general manager Kyle Roche. “Having a character you can make eye contact with, set up in the same way you’d set up an Alexa skill, just drag and drop in a browser, is very attractive for some customers. You don’t need specialised programming or 3D graphics expertise.”

Mr Rogers at Rewind concludes: “In the long run, everything will be fine. The problem with the tech industry is that we’re always washing our laundry in public; no one has time to develop well, so they ship alpha and beta versions for testing which fail fast and often. That’s good product design, but tough when you’re trying to convince the public.” 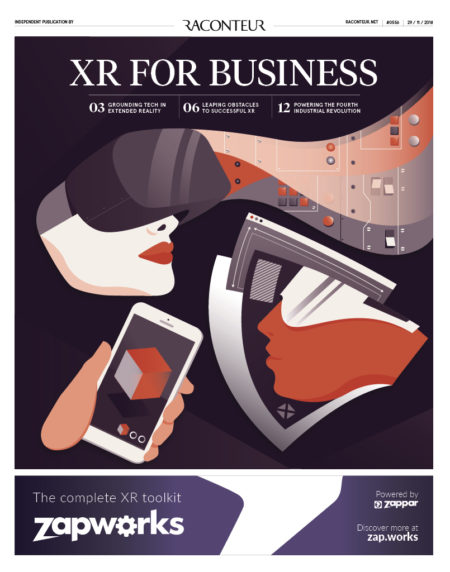