Digital transformation is a little bit like The Matrix. At the start, Keanu Reeves is noodling around with a couple of PCs, a consultant enters his life and encourages him to see the world as a huge technical matrix. Understanding this system properly will give him great power. He fumbles it. A lot. But finally, he grasps his place and he’s permanently at the heart of the constantly evolving system.

Given the rapid speed and evolution of disruptive technologies, even digital-born organisations feel a little bit like Reeves’ character Neo, having to continually transform to stay up to date.

“Over the last seven or eight years the rise of digitally native user-focused businesses like Amazon and Uber means customers now expect every company to interact with them in the way they interact with Amazon or Uber,” explains Perry Krug, principal architect, strategic accounts at big data integration company Couchbase. “Human beings are trained to want constant improvement, iteration and change.”

But do these digital-native companies actually view it as transformation? Yes and no. “Natives building stuff from scratch do have a different culture from the outset, although some have taken off-the-shelf tech to get to market quickly,” says Oded Karev, vice president at data technology developer NICE.

“If you use off-the-shelf systems, you end up similar to digital migrants, enterprises that know they need to transform, but don’t have the tech to manage that transformation. In fact, in that scenario, legacy enterprises have the largest resources available, so if they can overcome the challenges, they have a head start.”

Indeed, the gap between legacy enterprises and digital natives is decreasing, says Mr Krug. “Retailers like Tesco are as cutting edge as any online-only business,” he argues. “The biggest challenge is analysis paralysis… the desire to boil the ocean and be revolutionary, but not knowing how to get started. That can be true of both groups. The most successful enterprises are the ones that start small in one area and constantly iterate.”

Michael Allen, vice president, Europe, Middle East and Africa, at app performance platform Dynatrace, says: “The culture of constant transformation should be at the heart of digital-native companies, but that’s not always so – sometimes cultures have to change.”

Two to three years ago, Dynatrace released new versions of its software twice a year. “But people use our tools to be more agile, so we had to change culturally,” he explains. “We now do 250 software deployments a day with one major release offering new functionality every two weeks. We run 35,000 automated tests an hour on stuff our developers build; it’s tested within an hour of developing and then it’s out there.”

And while a lot of the press coverage about digital transformation focuses on retail, Colin I’Anson, chief technologist for internet of things at Hewlett Packard Enterprise (HPE), points out that every business would benefit. He cites a recent client, Kaeser, that makes high-pressure pumps for delivering compressed air to power tools in factories. HPE combed through all of the company’s available data and realised that by measuring a pump’s performance they could predict its behaviour.

“Looking at indicators like vibration and bubbles getting into fluids, we set up an algorithm that predicts how much longer this pump is going to survive,” Mr I’Anson explains. “By understanding common failures, Kaeser could plan which spare parts were needed nearby, rather than having all spare parts in stock at all time. They made a saving of $10 million while, by anticipating failures, reducing failure rate by 60 per cent.”

Eventually the data showed that Kaeser’s business would improve if it loaned or rented out it’s compressors and charged for the air, like a mobile phone company with free handsets and voice, text and data charges. “Kaeser can now change compressors according to what the factory needs,” says Mr I’Anson. “And blowing compressed air reliably and continually, like electricity, makes it harder for competitors to replace Kaeser.” 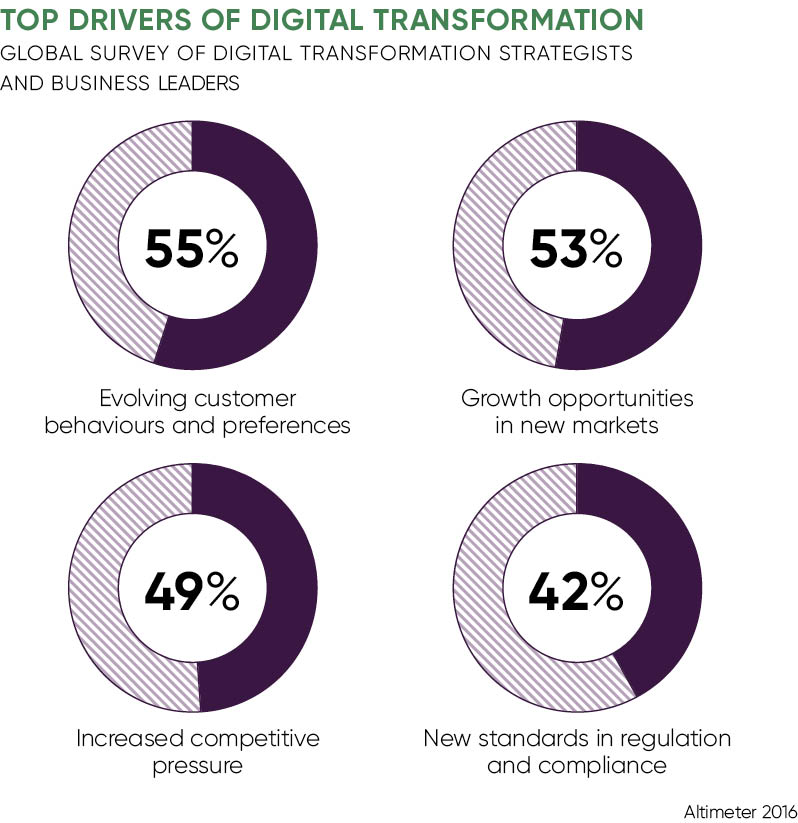 The rise of artificial intelligence and machine-learning can help as technology solutions themselves can transform as they learn, says Mike Hobday, cognitive automation practice leader at IBM. The company’s Watson supercomputer thinks like a human; it can understand intent, handle most of the standard functions of an IT help desk, including lost passwords, with chatbots and structured or unstructured data analytics.

“There is effort involved in training your solution,” he explains. “But after that it can make judgment calls like a human. You can set levels of confidence – if the bot is 90 per cent sure, go ahead; if 70 per cent sure, go to a human adviser. It frees up staff to interact with users in ways that can drive revenue growth.”

This level of transformation is much more complex than simple “if… then…” data-processing. And further change is on the way as enterprises struggle to incorporate new technology such as blockchain into supply chains. Indeed, the term digital transformation itself is starting to fall out of favour, giving way to digital evolution, says Anand Birje, global head of digital and analytics practice at HCL Technologies.

“Transformation implies that there is an end goal – a place the company is heading to,” he explains. “In fact, we’re now in a constant change environment – large enterprises need to rethink processes constantly. Do they have the right strategy? How can they better serve the user? How can they secure and improve their asset life cycle? Digital transformation has been seen as a topic companies had to deal with. Now it’s just the way we do business.”