Hybrid cloud: the best of both worlds

Many companies are avoiding the cloud even for web-hosting and communications. Research by Claranet and Vanson Bourne shows between 40 and 70 per cent of corporate applications are typically hosted internally using an on-premises infrastructure.

Raconteur asked a broad cross section of experts for their take on the hybrid cloud. This included independent experts, representatives from the top cloud suppliers and corporate chief information officers, who make the call on how to approach cloud migration. Their answers tell us a lot about how to get the best from the cloud.

When you factor in practical issues of cloud migration, the merits of the hybrid approach become clear

First up, there is general agreement that the cloud is superior to an on-premises approach in pretty much every way. Cost, versatility, ease of access, maintenance, scalability – the cloud is better at all of these things.

“If you are starting off as a new organisation you would be a ‘born on the cloud’ organisation,” says Doug Clark, cloud leader at IBM. Everything from finance and human resources (HR) to security and web-hosting ought to be cloud based.

But, as Mr Clark is quick to point out, every company comes with history. And that is where the choice between cloud and on-premises gets complicated. When you factor in practical issues of cloud migration, the merits of the hybrid approach become clear. 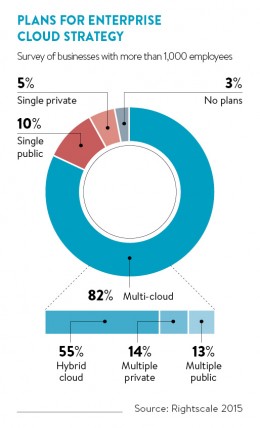 A recent survey by RedHat and IDG reveals the biggest concerns with moving totally to the cloud. The number-one concern is security and compliance issues, cited by 49 per cent of companies. Banks, for example, are often banned from using certain public cloud services.

Concerns over migration were cited in the survey as the second biggest reason to avoid the cloud with more than one in three companies saying they felt their applications were too mission critical to risk moving and they felt conventional architectures were more stable.

Expense is a factor with 33 per cent saying new software licensing is too expensive. Consider a product like Adobe’s Creative Cloud suite; companies holding Adobe CS5 licences will find it hard to justify ditching these for a near-identical cloud version of the product which entails a monthly fee.

These issues mean that in practice it is tricky to move entirely to the cloud. Just ask Robin Johns, a senior executive who had to make big decisions for a huge infrastructure project. He is head of information services at the Thames Tideway Tunnel, nicknamed London’s “super sewer”. It is a colossal job, the largest infrastructure project ever undertaken by the UK water industry. The sewer is 25 kilometres long and costs £4.2 billion.

Mr Johns built the IT system from scratch and after deliberation went for a hybrid cloud set-up. This comprises a private cloud of 130 virtual servers hosted by Advanced 365, who also agreed to manage Tideway’s overall IT infrastructure. Communications, including Office 365, SharePoint and Skype for Business, are run on the public cloud. And there is an in-house component, with the Bentley-design software run from an on-premises IT system. Media files are also hosted on-premises.

“We wanted to use the cloud as much as possible,” says Mr Johns. “We are an infrastructure project with private investment and we don’t know who might buy us in the future. Any buyer would want to use their systems, so it didn’t make sense to invest a lot.”

Security in the cloud

Security wasn’t an issue. “The security models deployed by private and public cloud providers are much better than ten years ago,” says Mr Johns. “If you have done your due diligence, you should be happy with security in the cloud.”

One other issue tilted the decision in favour of the hybrid model – upgrades. “When you use software as a service, you are reliant on the supplier for patches and upgrades. Apple iPhone users will know this. You can’t control the timing. With on-premises you can do it yourself,” he says. The blend of cloud and on-premises hosting meant Mr Johns got exactly what he needed for each application. 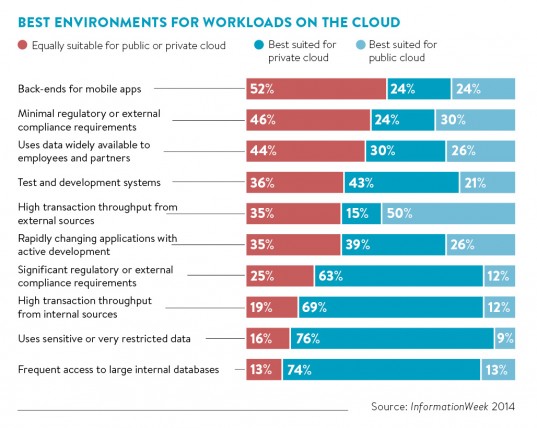 Here’s another issue in the cloud versus on-premises debate. When chief information officers (CIOs) talk about security and other concerns, they may not mean what they say. “Security is a card often played by CIOs looking to maintain control of the empires they fought so hard to establish,” says Lee Newcombe, cloud expert at KPMG. “People are reticent to see their influence diminish. If you run datacentres and move to the cloud, you don’t need so many staff. Your empire shrinks, which is upsetting. It is human nature.”

It is a theory more plausible than claiming security concerns. Today’s cloud is widely seen as secure, if not more secure, than on-premises hosting. As William Fellowes, cloud expert at IT consultancy 451 Research, says: “I would say the public cloud at this point in time is more secure than pretty much any on-premises service provider.”

He points out that even the most paranoid industries are using public cloud. “There has been a sea change in attitudes to public cloud in regulated industries. Banking and insurance are well publicised cases of firms moving to Amazon Web Services, Azure and Google,” he says. In the Netherlands the regulators permit banks to use the public cloud. That would not be possible if there were any question over security.

A final issue to consider is that control over the location of data is mandated by European Union law. Yet many users of the cloud lose sight of where their data ends up in the cloud.

Research by VMware shows more than a third of UK business data is stored outside the UK and 69 per cent of businesses are concerned they may need to move data to comply with regulation or customer demands. Yet 90 per cent of firms are unprepared to move data to the UK. While cloud providers strive to create data-location compliant services, an on-premises approach can address this.

So this is the story of the hybrid cloud. In an ideal world, business would be rushing to embrace the cloud for all activities. But factor in legacy systems, the cost of moving, data compliance, internal politics, integration, good old fashioned ego issues and it’s clear on-premises hosting has a future. For these reasons the hybrid model will be with us for some time yet.