New technology trends have a tendency to be all encompassing. Not only is the latest trend the cheapest, most efficient way to do something, it is also supposedly game-changing for most, if not all, industries. This same hyperbole has been used within the legal sector for blockchain, with the technology promising transformative benefits that are largely yet to become reality.

The numerous use cases have been well documented, from smart contracts that mean that if a service isn’t delivered, a customer doesn’t pay, or if it exceeds the contractual parameters of use, it triggers payment, penalties or cessation of service. This is without the long legal paper chain that requires a lawyer to be instructed about the history of the deal, decipher the details and correspond with the opposing side.

Then there’s intellectual property, where royalties from streaming could be coded into the blockchain to ensure artists are paid immediately. Other use cases include land ownership in developing countries and chain of custody, both of which demonstrate blockchain’s effectiveness at ensuring certainty of transactional history in a highly encrypted database. 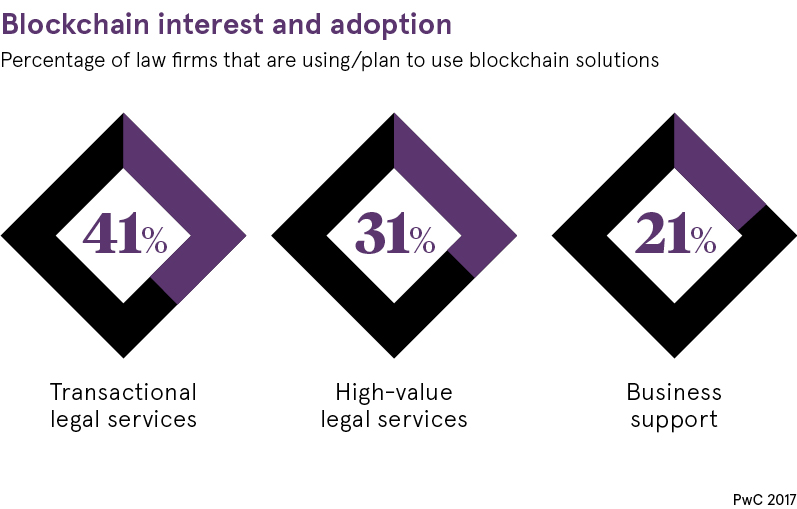 All of these use cases are also linked. As Alistair Maughan, co-chair of global law firm Morrison & Foerster’s technology transaction group explains, the first consideration for his company regarding blockchain wasn’t about using the technology internally, it was about helping clients to understand how they could make use of it. There has been an urgency for law firms to come up with solutions and this is why many are investigating the possibilities.

Global law firm Hogan Lovells has been looking at smart contracts, while Fieldfisher says it is highly experienced in cryptocurrencies, proof of existence and smart contracts.

“Firms that have engaged with blockchain on an experimental basis are niche technology companies or larger international firms with a proportionally large R&D budget,” says Gareth Malna, a solicitor at Burges Salmon.

There is also the potential for medium-sized firms to look into blockchain, albeit in a different way. According to Joanne Frears, a solicitor at Lionshead Law, early-embracers could collaborate with smaller blockchain developers to create a joint blockchain solution.

But many of these pilots are shrouded in secrecy. Karim Derrick, head of research and development at global lawyers Kennedys, suggests that much of the alleged involvement in blockchain amounts to “hot air”. He says his company is actually acting on blockchain right now. The company has built a fraud-focused insurance prototype on IBM hyperledger software.

“Most of fraud happens because clients have their own databases and there is very little interaction that is automated, so fraudsters operate in the gaps between these databases,” Mr Derrick explains. “Blockchain will enable insurers to share their books with each other without exposing their books. This enables them to cross-reference claims and make it difficult for fraudsters to exploit the ignorance between them.”

Kennedys is also exploring the use of blockchain in motor claims, to enable insurance carriers, repair garages and hire companies to process claims automatically. For Mr Derrick, blockchain is merely an extension of a database, but it “incentivises people to share data and makes sure people can get data” because of the added security around it.

One of the hurdles of blockchain for law firms and their clients is regulation. UK companies have to ensure that what they’re doing is authorised by the Financial Conduct Authority and that the use of the technology doesn’t undermine the regulations. Depending on the use-case, there is also the consideration of personal data and privacy, particularly with the incoming European Union General Data Protection Regulation.

In addition, there may be apprehension from decision-makers about the unknown; what the technology is, whether it is at the right level of security, and if it really is more resistant to hackers and malware than proprietary systems. For example, DDoS  or denial-of-service attacks are less effective because of blockchain’s decentralised nature – information would be stored among a large network in many locations, so an onslaught of requests that take down targeted servers won’t be as much of a threat.

Blockchain’s main attraction is security, but those making investment decisions will need proof the technology works

Of course, blockchain’s main attraction is security, but those making investment decisions will need proof the technology works and that there aren’t any workarounds.

Most of these fears can be alleviated with the right expertise, but this leaves larger firms in a better position, with the budget to hire the best talent. Smaller outfits would have to co-operate with technology companies, making use of the tech firm’s in-house talent, or send staff out to training sessions.

But even the right experts need to be listened to by lawyers. “You need to empower senior specialist tech professionals across the firm, telling us how we need to change, what the tech is and what the client wants,” says Morrison & Foerster’s Mr Maughan.

While it’s clear blockchain is a technology that will affect the legal industry, the repercussions are still unclear. According to Ms Frears at Lionshead Law, commercial and dispute resolution lawyers could be out of a job within ten years.

“Once real services are put into blockchain, the role of a lawyer to do due diligence about the good or services, to check what can be offered under a contract, prepare the terms and present them to a purchaser is negated entirely,” she suggests, emphasising that the addition of artificial intelligence will mean the fields of banking law, financial services law, litigation support and paralegals will be obsolete.

While it’s clear blockchain is a technology that will affect the legal industry, the repercussions are still unclear

Lawyers, she says, are “by comparison an expensive and fallible resource, with creaky systems and leaky databases that are prone to being hacked”.

But William Akman at Morrison & Foerster believes that complicated legalese will make it extremely difficult for certain legal agreements to be completely automated, without the need for a lawyer.

Mr Maughan gives the example of smart contracts needing to be presented in a way that is understandable by the person signing it, and that much of the contract will include subjective statements, such as “X will make reasonable efforts to do Y”, both of which may be difficult to automate. He envisages a hybrid of technology and lawyer within smart contracts, whereby some parts of a contract can be fully automated such as a service level agreement with an IT company, but other parts need a human element.

Regardless, there is movement away from lawyers, so fewer hours to bill. However, Mr Derrick at Kennedys believes this is a necessary move that law firms need to embrace. “We’ve seen claims drop with our technology and clients only using lawyers when they need to,” he says, adding that work on high-end legal issues will still be required. “What we’re essentially saying to young lawyers is that the world is changing and their route to becoming a partner is not the same – it will involve using technology. This is a powerful message.”

This shift away from traditional law services will also benefit in-house legal teams and Mr Maughan believes they will be at the forefront of using blockchain. “We’ve seen a distinct rise of legal operations within large clients, often this is about process loads and methodologies, as well as working out how to adopt new technologies,” he explains.

Meanwhile, law firms are opening themselves up to a whole range of other types of business to remain relevant in the digital age. This includes more sophisticated functions in due diligence and deal-making, as well as the potential to track down cryptocurrency in divorce settlements and provide guidance for banking on stocks running on blockchain.

The key for those involved in the legal sector is to ensure they have a foot in the door with blockchain, so when other more traditional openings close, they have somewhere to go.