Machine-learning and quantum computing are two technologies that have incredible potential in their own right. Now researchers are bringing them together. The main goal is to achieve a so-called quantum advantage, where complex algorithms can be calculated significantly faster than with the best classical computer. This would be a game-changer in the field of AI.

Such a breakthrough could lead to new drug discoveries, advances in chemistry, as well as better data science, weather predictions and natural-language processing. “We could be as little as three years away from achieving a quantum advantage in AI if the largest players in the quantum computing space meet their goals,” says Ilyas Khan, chief executive of Cambridge Quantum Computing.

This comes after Google announced late last year that it had achieved “quantum supremacy”, claiming their quantum computer had cracked a problem that would take even the fastest conventional machine thousands of years to solve.

“Developing quantum machine-learning algorithms could allow us to solve complex problems much more quickly. To realise the full potential of quantum computing for AI, we need to increase the number of qubits that make up these systems,” says Dr Jay Gambetta, vice president of quantum computing at IBM Research.

Quantum devices exploit the strange properties of quantum physics and mechanics to speed up calculations. Classical computers store data in bits, as zeros or ones. Quantum computers use qubits, where data can exist in two different states simultaneously. This gives them more computational fire power. We’re talking up to a million times faster than some classical computers. 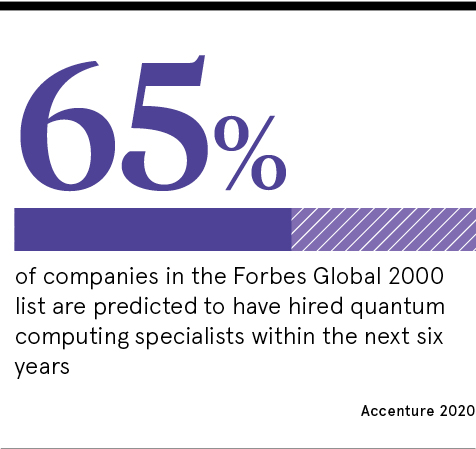 And when you add a single qubit, you double the quantum computer’s processing power. “To meet Moore’s Law [the number of transistors on a computer chip is doubled about every two years while the cost falls], you would need to add a single qubit every year,” says Peter Chapman, chief executive of IonQ.

“Our goal is to double the number of qubits every year. We expect quantum computers to be able to routinely solve problems that supercomputers cannot, within two years.”

A focus on optimisation problems

Already industrial behemoths, such as IBM, Honeywell, Google, Microsoft and Amazon, are active in the quantum computing sector. Their investments will have a major impact on accelerating developments.

“We expect algorithm development to accelerate considerably. The quantum community has recognised economic opportunities in solving complex optimisation problems that permeate many aspects of the business world. These range from ‘how do you assemble a Boeing 777 with millions of parts in the correct order?’ to challenges in resource distribution,” explains Dr David Awschalom, professor of quantum information at the University of Chicago.

“Many of the computational tasks that underlie machine-learning, used currently for everything from image recognition to spam detection, have the correct form to allow a quantum speed up. Not only would this lead to faster calculations and more resource-efficient algorithms, it could also allow AI to tackle problems that are currently unfeasible because of their complexity and size.”

Quantum computers aren’t a panacea for all humankind’s informatic problems. They are best suited to very specific tasks, where there are a huge number of variables and permutations, such as calculating the best delivery route for rubbish trucks or the optimal path through traffic congestion. Mitsubishi in Japan and Volkswagen in Germany have deployed quantum computing with AI to explore solutions to these issues.

There will come a time when quantum AI could be used to help us with meaningful tasks from industrial scheduling to logistics. Financial optimisation for portfolio management could also be routinely handled by quantum computers.

“This sounds like it might have limited use, but it turns out that many business problems can be expressed as an optimisation problem. This includes machine-learning problems,” says Chapman.

“Within a few short years we will enter the start of the quantum era. It’s important for people to be excited about quantum computing; it allows government funding to increase and aids in recruitment. We need to continue to push the technology and also to support early adopters to explore how they can apply quantum computing to their businesses.”

A need for better quantum performance

However, it’s still early days. The next decade is a more accurate time frame in terms of seeing quantum computing and AI coalesce and really make a difference. The need to scale to larger and more complex problems with real-world impact is one area of innovation, as is creating quantum computers that have greater precision and performance.

“The limitation of quantum technology, particularly when it comes to AI, is summarised by the term ‘decoherence’. This is caused by vibrations, changes in temperature, noise and interfacing with the external environment. This causes computers to lose their ‘quantum state’ and prevents them from completing computational tasks in a timely manner or at all,” says Khan.

“The industry’s immediate priority has shifted from sheer processing power, measured by qubits, to performance, better measured by quantum volume. Rightly so the industry is channelling its energy into reducing errors to break down this major barrier and unlock the true power of machine-learning.”

Over time it is the ease of access to these computers that will lead to impactful business applications and the development of successful quantum machine-learning. IBM has opened its doors to its quantum computers via the cloud since 2016 for anyone to test ideas. In the process it has fostered a vibrant community with more than 200,000 users from over 100 organisations.

“The more developers and companies that get involved in first solving optimisation problems related to AI and then over time building quantum machine-learning and AI development, the sooner we’ll see even more scalable and robust applications with business value,” explains Murray Thom, vice president of software at D-Wave Systems.

“Most importantly, we need a greater number of smart people identifying and developing applications. That way we will be able to overcome limitations much faster, and expand the tools and platform so they are easier to use. Bringing in more startups and forward-thinking enterprise organisations to step into quantum computing and identify potential applications for their fields is also crucial.”