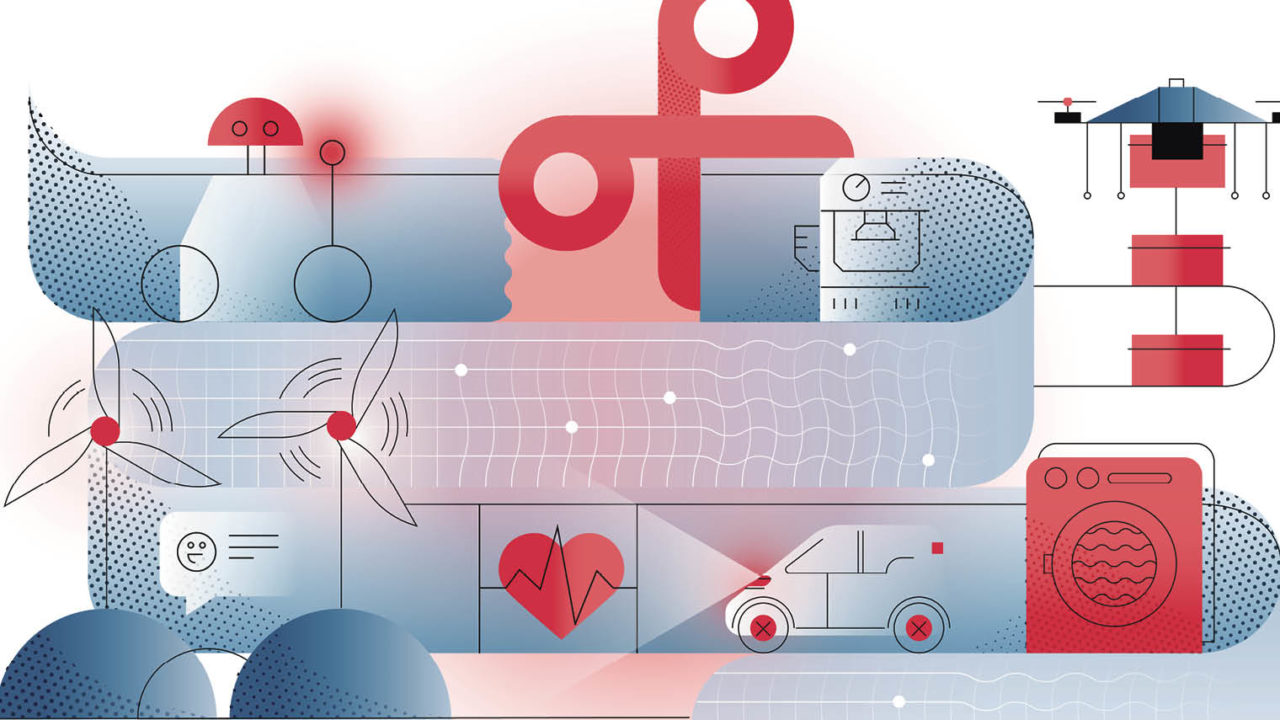 The global energy industry is facing fundamental shifts in the way it generates, sells and distributes power. The pressure is on to cut carbon emissions and, as a result, methods must be found to manage the increasing gigawatts of unpredictable, weather-dependent renewable energy flowing on to power grids. The cost of electricity is also a concern, not just for consumers, but for governments keen to keep their voters happy.

In short, there is a global demand for clean, cheap, reliable energy – and artificial intelligence (AI) is increasingly being used to help meet this need. Enabling the growth of low-carbon, green electricity is an AI application with a potentially huge long-term impact.

Enabling the growth of low-carbon, green electricity is an AI application with a potentially huge long-term impact

Renewable forms of electricity are emerging as the successors to traditional coal and gas-fired power plants. A key problem with renewable electricity, however, is its inconsistency. A cloudy day or a string of calm, windless afternoons will cut generation and can create power shortfalls. Conversely, too much energy can be generated; in March this year, for example, a sunny, windy Portugal produced more renewable electricity than it consumed.

At present, this means backup forms of power, which can be switched on quickly, often dirty diesel generators or coal plants, are used to smooth out the troughs and costly storage solutions are required to manage peaks of excess generation.

Aidan O’Sullivan, head of University College London’s energy and AI research, says using AI to create “forecasts for electricity demand, generation and weather can lessen the need for these backup mechanisms”, by predicting and managing fluctuations in production.

AI research is also investigating decision-making with a “scale and complexity that begin to exceed that manageable by a human operator”, he says. For example, AI could be used to manage electricity shortfalls by briefly switching off power demand across entire communities or regions. “This might be thousands of refrigerators in people’s homes or large sites of demand, such as industrial plants,” he explains. “The speed and complexity of this task requires advanced AI.”

The speed and complexity of this task requires advanced AI.

Ceding control of your home to a remote AI might seem like the stuff of science fiction, but the integration of AI into our appliances is already underway. For example, AI is being used to manage energy use in a device most of us use every day – mobile phones. The latest iteration of Google’s Android phone operating system includes a function which studies your app habits to ensure battery is deployed only on the ones you like the most. Meanwhile, rarely used apps, which would previously hum away in the background consuming power, are shut down.

AI can now also work out how much electricity each of your home appliances is using, too. UK startup Verv uses AI to find the “fingerprint” of each appliance, using data from your electricity meter. Home appliance manufacturers will come under increasing pressure to produce energy-efficient products. With access to exactly what it costs to run a dishwasher or TV, consumers could rapidly become disenchanted with power-hungry devices.

Dr O’Sullivan says the proliferation of virtual assistants in homes, combined with such data, could fundamentally disrupt the way we buy and use electricity. “The integration of energy data with products like Alexa and Google Home may lead to AI home energy management systems where, for example, rather than turn on your washing machine yourself, you schedule it to run when the electricity price is going to be lower.”

Businesses can also benefit from such advances. British AI developer Grid Edge has created technology which enables firms to control energy use in their buildings, making the most of low-demand, cheaper periods of electricity supply. As a result, companies can receive payments from the National Grid for taking strain off the grid at peak times. Chief executive Tom Anderson says: “The use of AI, in our case predictive machine-learning algorithms, enables the consumer to have foresight over their energy profile for the first time.”

This means energy providers could find themselves running to catch up with increasingly sophisticated customers, changing the power dynamic between supplier and consumer. Mr Anderson says the next frontier for AI and energy will be about “reshaping the relationship between consumer and supplier”. He predicts peer-to-peer markets for sharing electricity and “prosumer” models, where consumers generate and sell their own power, will multiply.

Relying on AI could leave energy networks vulnerable to cyberattacks

Passing the reins for energy networks to AI means new risks can emerge. Dr O’Sullivan cautions: “As the grid becomes more automated, it becomes more susceptible to cyberattacks. One area we are interested in is using AI to defend the grid and minimise damage from targeted attacks.”

Another risk is the potential for customers’ data to be exposed. Google’s Android app algorithm, for instance, will build datasets from your behaviour patterns, although Google says this knowledge will be stored solely on your device.

Dr O’Sullivan concedes that data privacy is a big concern. “There is the potential for people to infer all sorts of information from energy data, from occupation patterns even to religion,” he says. “Beyond that, there is the socio-economic concern this technology might benefit only those who can afford it and trap those who can’t in a more costly energy system.”

Despite these risks, Mr Anderson is positive about the future of AI and energy. He says the data such technology provides will empower, not restrict, electricity users. AI, he argues, enables citizens to question and work out “what is best for me from a comfort, carbon and cost point of view”. With such a proactive approach, the consumer can begin to be better informed and empowered in how they chose to engage with the wider energy system around them.