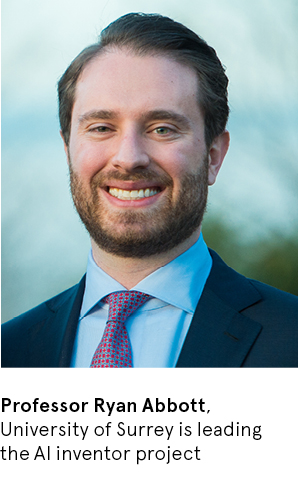 Last summer a group led by academics from the University of Surrey filed worldwide patent applications for two obscure new inventions: an unusual beverage container and a unique flashing light. But there was something very special about these rather esoteric objects. They both had an artificial intelligence (AI) inventor.

The specially shaped hot drinks cup uses “fractal geometry”, like a snail’s shell, in its design, with bumps and grooves to make it stackable and easily gripped by a robotic arm. The “neural flame” blinks at a frequency that our brains find hard to miss and could be used in search and rescue.

But the patent applications were about much more than hot drinks and flashing lights; the point was to file the first patent applications to name an AI system as the inventor in a bid to achieve intellectual property (IP) protection for things invented by computers.

The patents have been filed in the UK, European Union, United States, Israel, South Korea, China, Taiwan and Germany, and also under the Patent Co-operation Treaty, which facilitates the process of obtaining patent protection in more than 150 countries. However, the UK Intellectual Property Office (IPO) and the European Patent Office have already rejected the applications because inventorship can only be attributed to a human inventor, not a machine. Other patent authorities have yet to give their verdicts.

Professor Ryan Abbott of the University of Surrey, who is leading the project, says rejections from the UK and European Union were not unexpected. “This is a complex issue that has never been raised to a patent office before,” he says. “We expected we may need to appeal, which we are now doing, though this may take years.”

Abbott was heartened, though by some of the comments made by the IPO’s deputy director Huw Jones when he rejected the patent applications last December. Jones noted that innovation through AI would become “more prevalent” and suggested there was “a legitimate question as to how or whether the patent system should handle such inventions… [as] times have changed and technology has moved on”.

For Katharine Stephens, partner at law firm Bird & Bird, the legal hurdles faced by the Surrey University team are “pretty insurmountable” under current law. But she adds that the team’s patent applications are “very timely”, with the US Patent and Trademark Office having recently run a consultation on the patentability of IP created by AI inventors, and the World Intellectual Property Organization having begun a similar consultation last month. “This is just the issue that the University of Surrey is trying to sort out with these patent applications,” she says.

This is a complex issue that has never been raised to a patent office before. We expected we may need to appeal…

How might patent law evolve to deal with AI inventors? Stephens thinks we could see a new provision through which the owner of the AI would be deemed to be the owner of the invention. This would keep things in the human realm, she says, while ensuring innovation created through AI is protected.

Do AI inventors really exist yet?

At present, AI is mostly being used as a tool to help humans to invent things, rather than truly being the inventor itself. But according to the University of Surrey team, the beverage cup and neural flame were fully invented by an AI “creation machine” known as DABUS, owned by Missouri-based AI pioneer Dr Stephen Thaler.

Abbott explains that the machine uses neural networks to mimic the human brain. Essentially it sifts through data, connecting the dots, and is able to identify ideas autonomously that are novel and useful, without being told what to do or fed specific information. In its patent application, the team insists that if a human had done the same thing as DABUS, they would qualify as the inventor.

“Part of the reason why this is so important now is that AI invention is starting to get into mainstream research and development,” says Abbott. “In life sciences, for example, it may be an outlier at the moment, but in ten years’ time, it could become a primary means of developing new drugs.”

But he adds that, as it stands, those investing in AI inventors have no safe options for protecting their IP. They can put a human’s name down as the inventor on the patent application and this will be accepted at face value by the patent authorities. However, if the patent is then litigated and the name of the inventor shown to be inaccurate, the patent could be lost. So this is a risky move.

“Businesses have no real route at the moment for achieving patent enforceability,” Abbott warns. “But without this, where is the financial incentive to make these innovative breakthroughs in the future?”