The air has the acrid tang of chemicals. Flasks with colourful liquids sit in fume hoods, while purple-gloved researchers in white lab coats study chemical structures on their computer screens. Pharmaceutical sciences lecturer Dr Stephen Hilton hands over a pair of safety goggles and the tour of the lab at University College London begins.

It’s not the chemicals that are of interest per se, but rather the row of box-like machines which line the back wall. This lab is home to the Stephen Hilton Group; 14 researchers with a particular interest in 3D printing and chemicals. There are 11 3D printers here; one makes a buzzy whirr as it spits out a mould.

3D printing, also known as additive manufacturing, takes a computer-generated design and turns it into a three-dimensional object via a special printing machine that deposits successive layers of a material, such as plastic or metal, on top of each other. The technology is well known for making quirky pieces of jewellery and plastic replicas of the Eiffel Tower. But as costs have decreased, interest has surged and the technology is now common in mainstream manufacturing from car parts to toys. 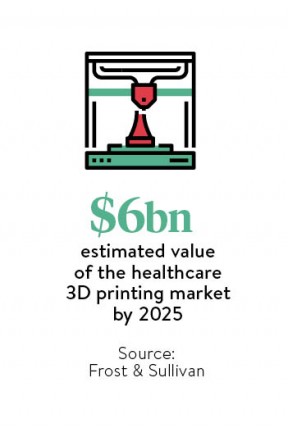 Healthcare is set to be a big winner from 3D printing, with hearing aids, prosthetics and implants already transforming the space. According to consultants Frost & Sullivan, the healthcare industry will drive 3D-printing growth, which will balloon into a $6-billion market by 2025.

But it’s what 3D printing might mean for the pills we pop that is really sparking interest and a flurry of research activity. Last year, the US Food and Drug Administration approved epilepsy drug Spritam (levetiracetam), the world’s first 3D-printed pill. The tablet, manufactured by Aprecia Pharmaceuticals, is printed with alternate layers of powder and droplets of liquid, creating a very high-dose drug with the ability to dissolve quickly. These features together are unachievable by conventional manufacturing.

Spritam’s approval is a milestone moment and now paves the way for a future of 3D-printed medicines. But these medicines won’t be anything like today’s. As Dr Hilton notes, 3D printing allows concepts to move “beyond imagination”. “It’s amazingly exciting,” he says. “There’s a lot of hype about 3D printing, but a lot of potential as well. In theory we can make anything we want.”

Healthcare is set to be a big winner from 3D printing, with hearing aids, prosthetics and implants already transforming the space

With this in mind, we may be popping pyramid-shaped pills in the future or 4D-printed medicines that change shape in the stomach. This is based on research by Dr Hilton’s group, which found that different shaped drugs, which can only be made through 3D printing, had different rates of drug release. Complex “polypills” could also become a reality, as seen with research at Nottingham 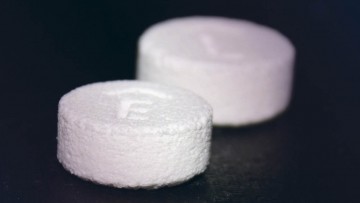 A one pill solution

These innovations would change how patients take their medications in the future, with doses tailored to individuals and one pill a day or week replacing the multitudes of tablets that might normally have to be taken. Drugs would be easier to take, work better and have fewer side effects.

Even more futuristic is research at the University of Glasgow, where regius professor of chemistry Lee Cronin is creating 3D-printed chemical reactors that carry out reactions to make new molecules. Using a digital code, changing the shape of 3D-printed vessels and altering a mix of 3D-printed base ingredients, Professor Cronin can create chemical reactions and produce different drugs. He is validating this approach to develop a 3D-printer-like chemical robot to accelerate the discovery and manufacture of new novel drugs in the future.

Yet 3D printing won’t just change the types of medicines we take in the future, but also how we access them or rather where they will be printed. 3D printing pills at home is a possibility, but still a long way off, with numerous issues to address.

More likely, and what many experts speculate, is that pharmacies will become 3D-printing medicine hubs. Here pharmacists would be handed a prescription, download a recipe from a pharmaceutical company, then 3D print the drug from basic ingredients while the patient waits.

“This is something pharmacists are waking up to,” says Professor Jayne Lawrence, chief scientist at the Royal Pharmaceutical Society. “They’re starting to realise this is a possibility.” And the time-frame? About ten years.

There are, of course, a number of challenges with this future scenario, including quality control, cyber attacks and illegal or counterfeit use. Meanwhile, regulatory hurdles, safety liability issues and outdated healthcare infrastructure could potentially delay adoption.

Regardless, this future is very real. Printing drugs on demand would cut storage and shipping costs, and improve access to medicines. For developing countries, this alone would be monumental. “The beauty of 3D printing is it reduces health inequalities worldwide because medicine becomes accessible for everyone,” says Dr Hilton. 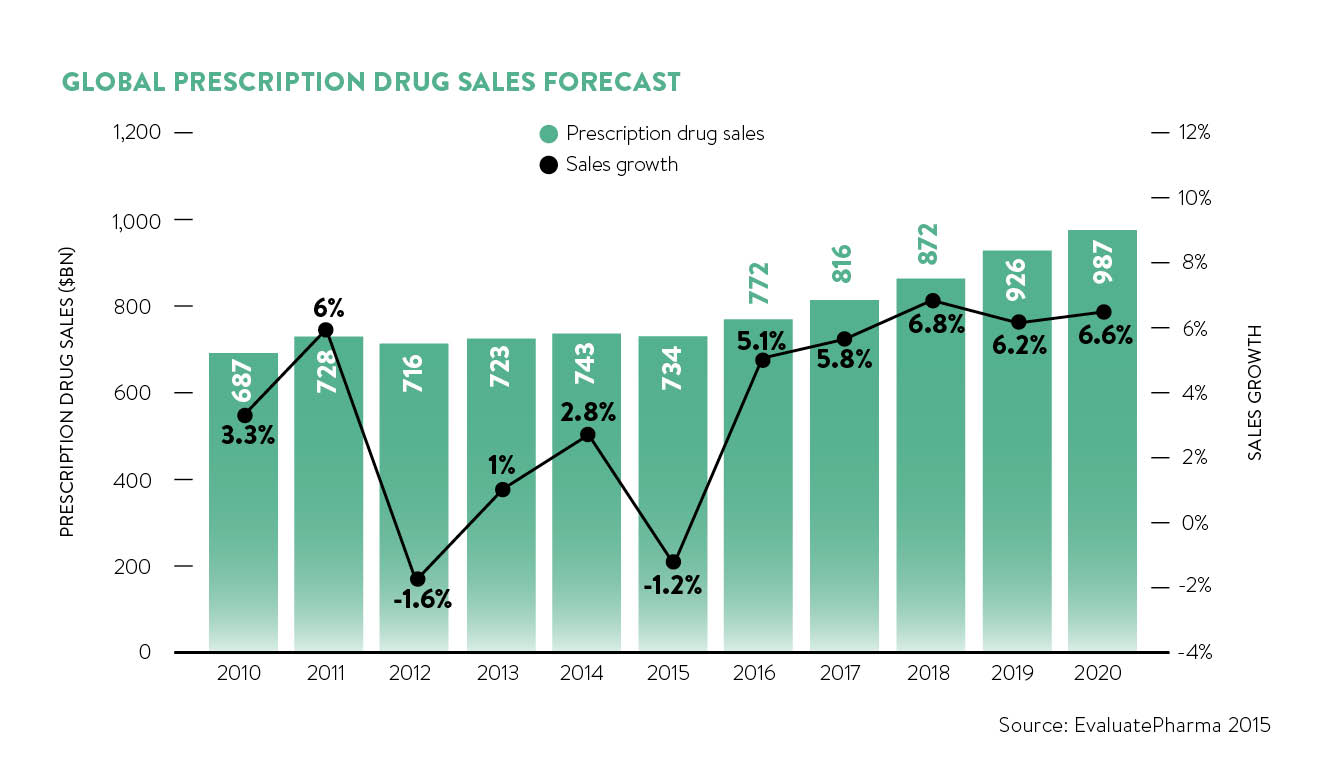 Simple tablets will be printed initially, but the ultimate outcome is for personalised 3D-printed drugs. “People would be able to have medicine tailored to their age, size, gender and medical requirements, rather than having to conform to current mass-production standards,” says Lucy Ackland, senior development engineer at the Institution of Engineering and Technology.

She believes personal information will be entered into the pharmacist’s computer where an algorithm will adjust the recipe, producing a drug tailored to the patient. In this way, people with swallowing difficulties could get quick dissolve tablets, pills in fun shapes could be printed for children, ten drugs could be combined into one pill or brail bumps added for those with poor eyesight.

Back in his lab, Dr Hilton denies 3D printing medicines is revolutionary. The technology already exists, he says. It’s just the matter of linking it together. The breakthrough is in exploring concepts you couldn’t think about before. “Now you can take the concept of ‘what if’ and use the technology to explore its limits,” he says. “This is beyond imagination. That’s exciting stuff.”

3D printing allows the customised production of prosthetics at a fraction of the cost of traditional prosthetics. Arm prosthetics are the most notable current use, with the technology particularly popular in war-torn countries. But research into other 3D-printed prosthetics such as ears is underway.

A variety of medical equipment can be 3D printed, such as forceps and clamps, which can drastically cut costs and could be particularly useful in developing countries where access and sanitation can be a problem. Already customised 3D-printed hearing aids are widely available.

While models of any part of the human anatomy can be 3D printed, it’s the fact these could be patient-specific based on CT and MRI scans that is exciting. Such models can be used in preparation for surgery or as tailor-made implants, such as in facial, dental or cranial reconstruction.

Researchers have been able to 3D print porous biodegradable scaffolds. These could be implanted in the body where cells migrate into the scaffold, forming new tissue and effectively regenerating a new organ. New bone has been grown in this way, while customised nose and ear scaffolds are also being explored.

Researchers have successfully 3D printed live cells to produce different tissue types including, skin, liver, cartilage and blood vessels. This 3D bioprinting can be used to test new medicines, but the future potential is to 3D print new organs using the patient’s own cells, which would reduce organ rejection.