Britain’s housing market is broken and fixing it is high on the political agenda, with the government attempting to stimulate increased supply by boosting demand with measures such as the Help-to-Buy scheme.

Some argue that the solution is to boost supply, but whatever the answer, the fact is that, if the UK is to meet its ambitious house-building targets, we are going to have to build a lot more homes.

But quite apart from the political and planning ramifications of meeting the target, there are a number of logistical issues, too.

“There is just a lack of capacity in terms of people,” says Mark Hayward, managing director of the National Association of Estate Agents. “When we were building 300,000 homes a year in the 1960s, all building firms had their own labour force. They don’t have that now. Apprenticeship schemes are not producing enough people and the industry has not been training up enough people. During the recession, a lot of people left the industry to do other things and they are not coming back.

“The big developers reckon they can increase their capacity by 15 to 20 per cent maximum, which won’t get us to the target. But anyway, the large plcs are pursuing profit not volume.”

For the pace of home-building to increase, new entrants will need to come into the market, particularly smaller players, who have been leaving the sector in recent years.

Equally, we need to find places to put all these new homes. “That means we have to use as much brown-field land as possible and take a different view of green-field sites, while also revisiting some taboo areas such as certain flood plains,” says Simon Price, director and resources leader at Ramboll, a sustainable engineering design firm.

In cities, one answer to the lack of space is to look up. The latest London Tall Buildings Survey, carried out by property consultancy GL Hearn and New London Architecture, shows that “263 tall buildings over 20 storeys were found to be proposed, approved or under construction within Greater London”, an increase of 36 per cent from the 2014 survey. Of these, 70 towers are currently under construction, with 62 earmarked for residential purposes and set to provide almost 15,000 new homes for the capital.

We need to look carefully at alternative methods of construction, as happens in Scandinavian countries, Germany and the United States

However, even when sites have been identified, challenges remain. “Large-scale residential developments will play a vital role in meeting London’s housing supply demands, but their construction does present significant challenges from a design and environmental perspective,” says Jerry Lehane, managing director at ChapmanBDSP.

“For super-dense residential developments in busy urban environments, one of the more fundamental engineering challenges is around energy supply. National Grid network reinforcements are expensive and have a long gestation period. Often the construction of the residential development in question can be completed faster than the network reinforcement.

“London has particular issues in this respect, where planning considerations and the sheer practical challenge of upgrading infrastructure in a densely populated environment can hinder swift delivery.”

For new homes to be delivered rapidly, it may be that more radical thinking is required. “We need to look carefully at alternative methods of construction, as happens in Scandinavian countries, Germany and the United States,” says Mr Hayward.

But the home-buying public in the UK has not embraced alternative building methods. “There is still a slight prejudice. People want something that they perceive as more substantial. But it still takes a long time to build a house. If we can get the public away from bricks and mortar to consider something slightly different, we will be able to give them something that is still very good, but a lot cheaper and a lot quicker,” he adds.

Off-site construction can help to mitigate skills shortages and time constraints, says Mike Brogan, chief executive of Procure Plus, a North West-based social housing regeneration consortium. As well as regenerating properties, Procure Plus is currently finalising plans to open its own off-site manufacturing factory. “What we are looking to do is get to something that is more like the automotive industry,” Mr Brogan says. “One of the benefits of off-site manufacturing is the process.”

Given the pressure to deliver new homes quickly, off-site methods have obvious appeal in residential construction as they dramatically reduce build times, in some cases by as much as 14 weeks, says David Hopkins, executive director of Wood for Good, the timber industry’s sustainability campaign.

One of the barriers to mass production of homes off-site is that every homeowner’s requirements are different, but Procure Plus aims to get round this by using a process of “mass-customisation”. “Customers still have a range of permutations, but they don’t have unlimited choice,” says Mr Brogan. Because there is an element of standardisation, the company is able to place large orders with manufacturers that result in cost-savings per property of 20 per cent. As a social enterprise, Procure Plus plans to pass these savings on to customers.

Because off-site construction is more akin to a manufacturing process than building, it can be done by less skilled workers, helping to offset the loss of the industry’s skills base, and at the same time it offers better quality and precision because the products are being built in a controlled environment.

Furthermore, it addresses one of the building industry’s biggest environmental issues – the amount of waste it produces. When building homes on-site, developers tend to overorder materials to ensure that they do not run short. Currently, according to NetRegs, ten million tonnes of construction products are wasted every year, at a cost of £1.5 billion. Off-site, not only is far less waste produced, but what is produced can easily be recycled.

Off-site construction can also help developers to meet new sustainability goals. “There is a legal requirement to make sure that new homes reach sustainability targets – the code for new homes is being continually updated to wails of protest from house builders,” says Suzanne Gill, a partner in the construction team at law firm Wedlake Bell.

Innovative use of materials can also help to make homes more sustainable. The Bristol-based company Modcell makes homes using straw packed in timber frames, for example. It has also adapted the off-site construction model to reduce transport costs by locating temporary “flying factories” in farms near its construction sites, from which it also sources the straw.

Timber is another sustainable option, says Mr Hopkins. Not only is it a very good insulator that helps to reduce the energy-in-use consumption of homes, but “the energy requirements to manufacture timber building products are so low that lifecycle assessment data shows there is more carbon absorbed and stored in the wood than is emitted though the rest of the supply chain,” he says.

“This means timber products actually arrive on site with a carbon negative footprint and its inherent sustainability provides a cost-effective and natural way of incorporating this at source. Those that use it are effectively building with blocks of sequestered carbon rather than emitting it.”

But ultimately the challenge is to build houses that people want to live in, says Ramboll’s Mr Price. This doesn’t just mean sustainable buildings, but also a different way of living, a move towards apartment living with more shared space such as communal gardens and roof gardens.

He concludes: “It also means more communal infrastructure such as district heating. Cost is a big issue for city-living and shared infrastructure can help with that. We also need a move towards more people renting like they do in other European cities. If people get more used to that it will help them move away from the fixation with owning a house and climbing up the property ladder.” 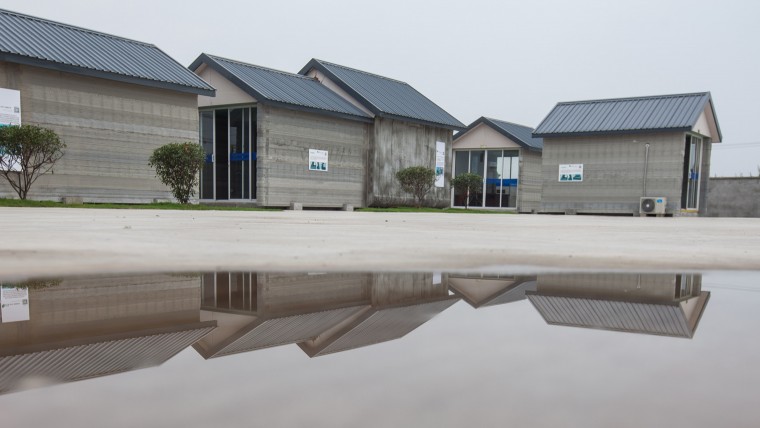 Building in cities, and the densely populated urban environment of London especially, is more challenging than ever before, with limited land available and often not a lot of room to work in.

One solution that may help to ease these constraints is 3D printing. While the process is most commonly used for small-scale components, ranging from car parts to hip joints, it is also possible to 3D print buildings.

Having in 2014 produced ten 3D-printed houses in a day, Chinese company WinSun earlier this year built a five-storey apartment building, with a mixture of industrial and construction waste, cement and a hardening agent, using 20ft-high and 132ft-long machinery that looks like a giant cake icer.

The company claims this reduces construction waste by 30 to 60 per cent, cuts the cost of labour by up to 80 per cent and the amount of time it takes to build a structure by 50 to 70 per cent, as well as reducing the requirement for virgin materials such as stone and brick.

Rob Francis, director of innovation and business improvement at Skanska, which is working with Loughborough University to develop 3D concrete printing, says: “3D concrete printing, when combined with a type of mobile prefabrication centre, has the potential to reduce the time needed to create complex elements of buildings from weeks to hours. We expect to achieve a level of quality and efficiency which has never been seen before in construction.”

Meanwhile, in the Netherlands, DUS Architects has built a house using a biofuel-based plastic. In future, the firm says, architects could e-mail houses to building sites and buildings could become entirely recyclable at the end of their lives. In addition, DUS says: “Rather than using standardised elements, 3D-printed designs can each be modified and customised to fit the user’s needs and taste. It will no longer be more expensive or more labour intensive to add details to, for example, your façade and it is easy to create unique objects.”

Because the process goes straight from raw material to final product, there is no waste and transport costs are reduced because designs can be printed on site. “This also implies that when 3D printing is used widely, it will no longer be cheaper to have things produced in countries such as China or Bangladesh as opposed to the Netherlands. Everyone can just produce everything in their own local context,” the company says.