Major manufacturers are reducing the amount of sugar in soft drinks ahead of the government’s sugar tax, although sticky problems remain

The reaction to George Osborne’s surprise announcement of a sugar tax in the March Budget was immediate. While celebrity chef and campaigner Jamie Oliver took to Twitter to celebrate the government’s “bold, brave” move, it was a bitter blow for the soft drinks industry, with shares in AG Barr, the maker of Irn-Bru, dropping by 4.5 per cent and Britvic by 2.4 per cent within minutes.

The two-tier levy is due to come into force in April 2018, when drinks containing more than 8g of sugar per 100ml, currently including Coca-Cola, Pepsi, Irn-Bru and Lucozade Energy, will be subject to a tax of 24p a litre. A lower band for drinks containing over 5g of sugar per 100ml, including Dr Pepper, Fanta and Sprite, will be taxed at 18p per litre. The government hopes to raise £520 million through the levy in its first year, which will be invested in improving sports in schools.

Companies have been given two years to reduce the amount of sugar in their products, but for many it’s an undertaking that started long before the announcement of the new tax. “As a business, health has been a pillar of our strategy for several years,” says Paul Graham, GB managing director of Britvic, the UK’s second-largest soft drinks producer. “There’s a whole load of stuff we’re doing around reformulation, taking calories out and leading with no sugar, all of which predates it. 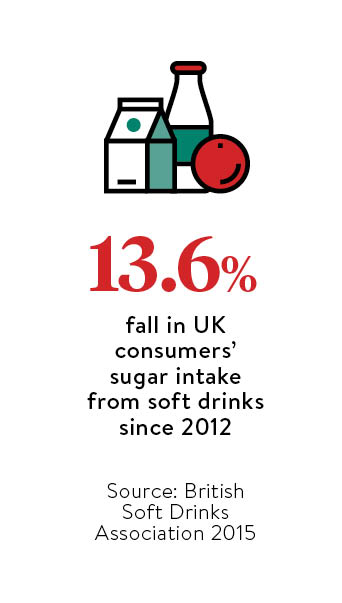 “We were a little surprised along with everybody else about the sugar levy being introduced. This focuses the conversations and some of the timings without necessarily meaning we need a whole new playbook. So it’s business as usual with some thinking about how we respond and how we dial certain things up.”

Britvic is not alone in responding to consumer demands for healthier drinks over the past few years. According to the British Soft Drinks Association, the industry has already reduced sugar levels by 13.6 per cent since 2012. Britvic, along with Coca-Cola, AG Barr and Lucozade Ribena Suntory (LRS), are part of an industry-wide commitment for a 20 per cent reduction by 2020. LRS says it is aiming to cut sugar by 10 per cent by 2018 and AG Barr by 5 per cent this year alone.

One area that manufacturers are exploring is reformulating recipes. In April, Britvic relaunched its Drench juice drink with new flavours and a lower-sugar recipe, taking it below the tax threshold with 4.7g per 100ml. The timing may have looked opportunistic, coming just weeks after the Budget announcement, but “that’s exactly where we were already”, says Mr Graham. The secret ingredient in the reduction is the natural sweetener steviol glycosides, or stevia, which is around 200 to 300 times sweeter than sugar, but contains virtually no calories. “It’s a great option to use,” says Mr Graham, “but stevia does have quite a bitter back taste, so working with it can be quite difficult.”

Preserving taste is the biggest challenge with reformulation, which is easier with a change in flavour, as with the Drench relaunch, but much more difficult with something like cola, where altering it even slightly can create a strong reaction among consumers.

“We can go two ways,” says Mr Graham. “If we take sugar out of a product, do we try and replicate the taste that was there previously – it can be done, but it’s difficult – or do we basically change the product and have a different-tasting drink? It’s one of the trade-offs we’re constantly working with.”

Soft drinks makers are also steadily changing the mix of their portfolios and the focus of marketing activity towards healthier drinks. After launching a lower-calorie Lucozade Lite variant last year, Lucozade introduced its first sugar-free formulation, Lucozade Zero, in March, supported by a £5-million marketing campaign. Coca-Cola followed suit in April with the announcement of a reformulated and rebranded Coke Zero that will “taste more and look more” like the real thing.

Customer awareness is key and, according to Coca-Cola’s research, half of British consumers weren’t aware that Coke Zero contained no sugar, hence a name change to Coca-Cola Zero Sugar and a £10-million marketing campaign.

According to the British Soft Drinks Association, 57 per cent of the UK market is now comprised of low or no-calorie drinks. By the time the levy is introduced in 2018, AG Barr says that at least two-thirds of its portfolio will not contain enough sugar to be subject to the tax. Britvic, too, is “in a really good place”, says Mr Graham. “Around 70 per cent of our total volume would currently be exempt from a sugar levy. And 75 per cent of our marketing is on no and low-sugar.” 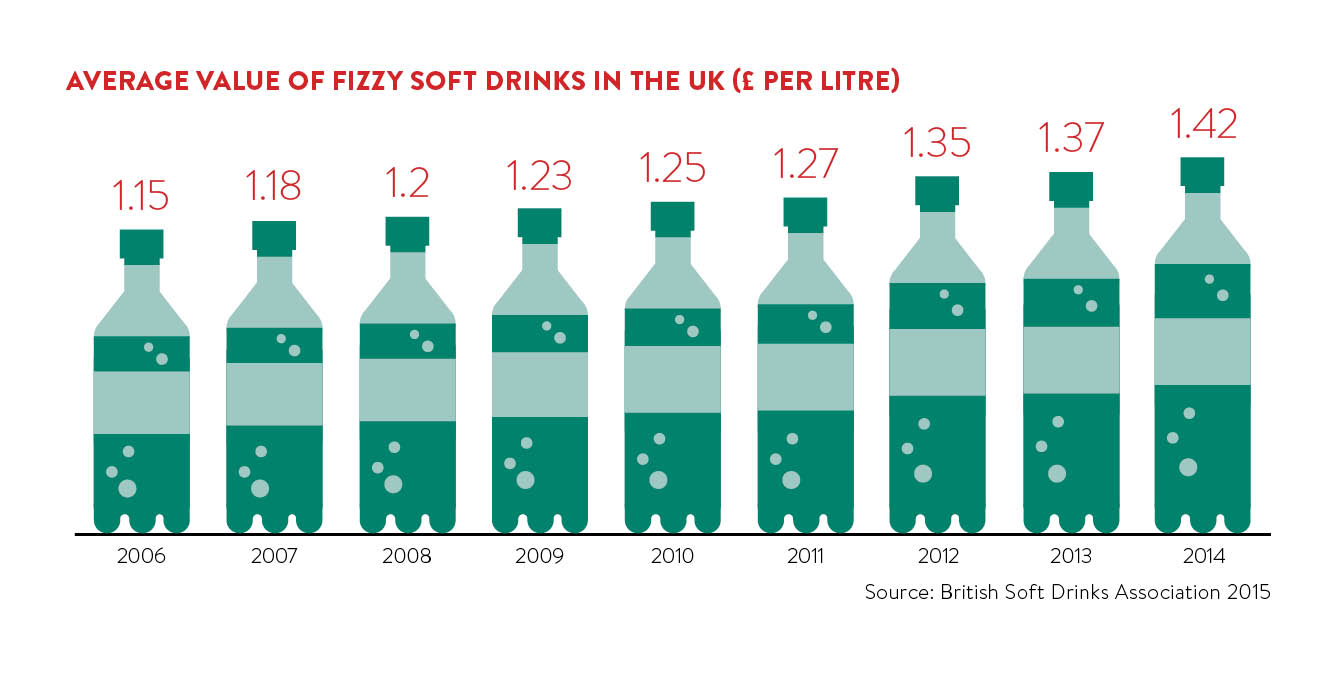 In the past two years, Britvic has discontinued its original recipe Robinsons squash and Fruit Shoot drinks, instead focusing on no added sugar formulations, as well as launching a sugar-free Tango variant and a lower-calorie sparkling version of J2O. “J2O does have a reasonable sugar count, but that sugar predominantly comes from the fruit juice. We have reduced that by 38 per cent since 2008,” says Mr Graham, adding “J2O is one we might do some work on”.

He is reassured by consumer reaction to new recipes, however. Since discontinuing the added sugar Fruit Shoot in 2014, Britvic has reformulated the product to add vitamins and reduce sweetness. “One of the areas we need to consider is what sweetness levels we’re putting in children’s products,” he says. “What we’re finding with consumer research is that kids are actually asking for less sweet products, which is encouraging.”

What Mr Graham cannot control, however, is the formulation of products such as Pepsi and 7Up that Britvic bottles and markets on behalf of PepsiCo. Along with original recipe Coca-Cola (10.6g) and Coke Cherry (11.2g), they are among the most sugary drinks on the market, with 11g per 100ml. The government’s intention is for the levy to be passed directly on to consumers to reduce consumption, something that seems to have been successful in Mexico, where a sugar tax that came into effect on January 1, 2014 led to an average 6 per cent monthly reduction in sales in the first year.

Manufacturers may be able to rely on brand loyalty to protect sales of some of their sweeter offerings, but it remains to be seen whether consumers will be willing to swallow an extra 8p on the price of a can for the taste of the real thing.