Rather than a problem halved, a problem shared may become something no one wants to own. Everybody’s problem becomes nobody’s and, being nobody’s problem, it tends not to get solved. Packaging waste is in danger of going down this wormhole of blind spots and buck-passing. So whose responsibility is it?

According to Jacob Hayler, executive director of the Environmental Services Association (ESA), all players in the packaging supply chain have important roles to play. “Government needs to set a stronger system of producer responsibility for packaging which boosts recycling,” he says. “Retailers need to use their influence over suppliers to encourage packaging to be more recyclable and over consumers to make greener choices.

Meanwhile, figures for packaging waste continue to make headlines, for the wrong reasons. The 2016 RECOUP survey revealed an average UK household uses nearly 500 plastic bottles a year, but only recycles just over half of them. This means some 5.5 billion plastic bottles went uncollected in 2015, more than 15 million every day.

When it comes to household recycling, in general, the licence allowed local councils in England to create their own policy leads to market fragmentation. According to Chris Waterhouse, chairman of the Packaging Society and managing director of consultancy iDi Pac, the onus is on Westminster to change the game.

“Government needs to engage with industry, local government, recycling and waste to construct a consistent and coherent approach,” he says. “A standardised approach will allow investment in the appropriate infrastructure.” 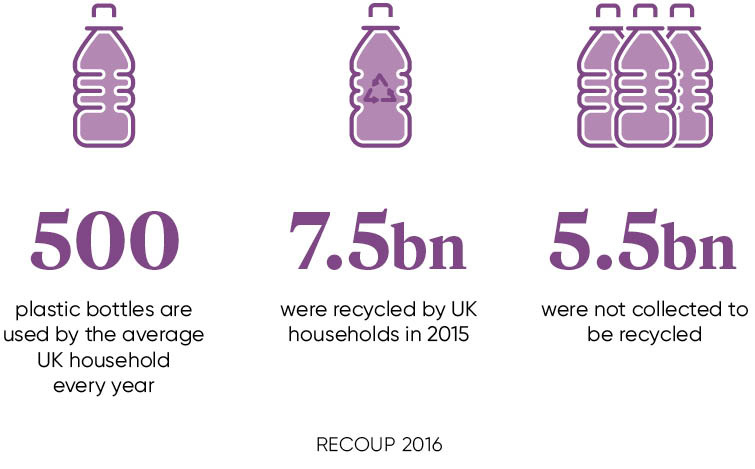 Policy-making is proving problematic, however. The national Litter Strategy for England, launched with the aim of reducing the £800-million annual burden on the taxpayer, disappointed many with its lack of ambition.

At the same time, north of the border, recent Scottish plans for a deposit return scheme to incentivise consumer recycling of bottles and cans, though comparatively brave, are also deeply unpopular within the packaging industry.

Moreover, it is not just a matter of what gets recycled and how much, but where it goes and gets used, says Mr Hayler. “Current legislation, in the form of packaging responsibility obligations, has done a great job in raising recycling rates at very low cost,” he says. “But there are no real drivers to encourage UK manufacturers to use recycled materials.

“This means much of the recycling we collect ends up being exported overseas. If we want a strong and stable long-term recycling market in the UK, then actions to encourage greater domestic use of materials will be critical. Introduction of differentiated fees under this system would help considerably.”

“One of the reasons government leadership is important,” says Trewin Restorick, founder and chief executive of environmental charity Hubbub, “is that it forces collaboration between all parts of the supply chain from manufacturers through to the waste industry.”

The power of collaboration has been amply demonstrated this year by Hubbub with its Square Mile Challenge, successfully recycling 1.2 million coffee cups from the heart of London.

Bringing together major retail brands, including Costa, Marks and Spencer, McDonald’s and Starbucks, plus the City of London and Network Rail, the scheme created 117 places for recycling. Given that the UK had been throwing away seven million coffee cups a day, with less than 1 per cent recycled, the benefits of shared endeavour are easy to see and count.

A collective shift in our approach to used packaging calls for more of a circular-economy mindset, one that truly starts seeing waste as a resource

Collaboration has also been key for Keep Britain Tidy in pursuing solutions with the packaging industry to design out problem elements, says chief executive Allison Ogden-Newton. “Keep Britain Tidy led on packaging innovation that removed ring pulls from cans and polystyrene from burger boxes. That kind of ‘thinking outside the burger box’ is needed across the entire industry if we are to turn the tide on litter and waste.”

Looking differently at packaging waste by actually taking a photo of it can bring new meaning to the process of picking up rubbish, thanks to a free smartphone app called Litterati.

The app enables users to identify, collect and geotag the world’s litter. It harnesses the power of crowdsourced data to map incidences of pollution worldwide, with keywords identifying commonly found brands and products, from fast food to cigarettes. This data is then used to work with companies and organisations to find more sustainable solutions.

Such smart use of mobile and digital technology helps boost citizen engagement. It also promotes producer accountability, which is key, says Litterati founder and chief executive Jeff Kirschner. “The needle moves when consumers demand change, either with their wallet or their words,” he says. “However, as the source, brands wield enormous influence.”

Photographic evidence supports proof of liability and allocation of responsibility. San Francisco even used Litterati’s data to create a tax on cigarette sales, which helps generate nearly $4 million a year towards cleaning up.

For Mr Kirschner, though, it is not punitive disincentives, but potential positives that will ultimately drive change. “Sticks are short sighted. I’m all about carrots. Brands have a wonderful opportunity to transform an environmental hazard into an economic engine and become an industry hero,” he says.

Such a collective shift in our approach to used packaging calls for more of a circular-economy mindset, one that truly starts seeing waste as a resource. This is not just about improving policy or transforming technology – it’s time to upcycle our thinking, too. 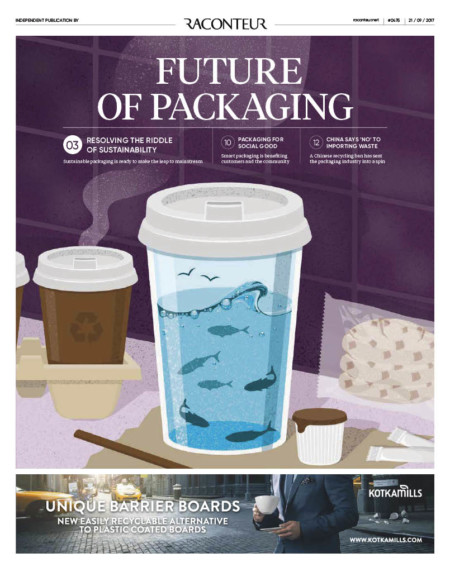 Why hasn’t ESG investment really taken off yet?

E-tailers must wrap up a better package

Also in Future of Packaging 2017