Faced with a rising global water shortage, cities can no longer pour away precious resources and must recycle wastewater 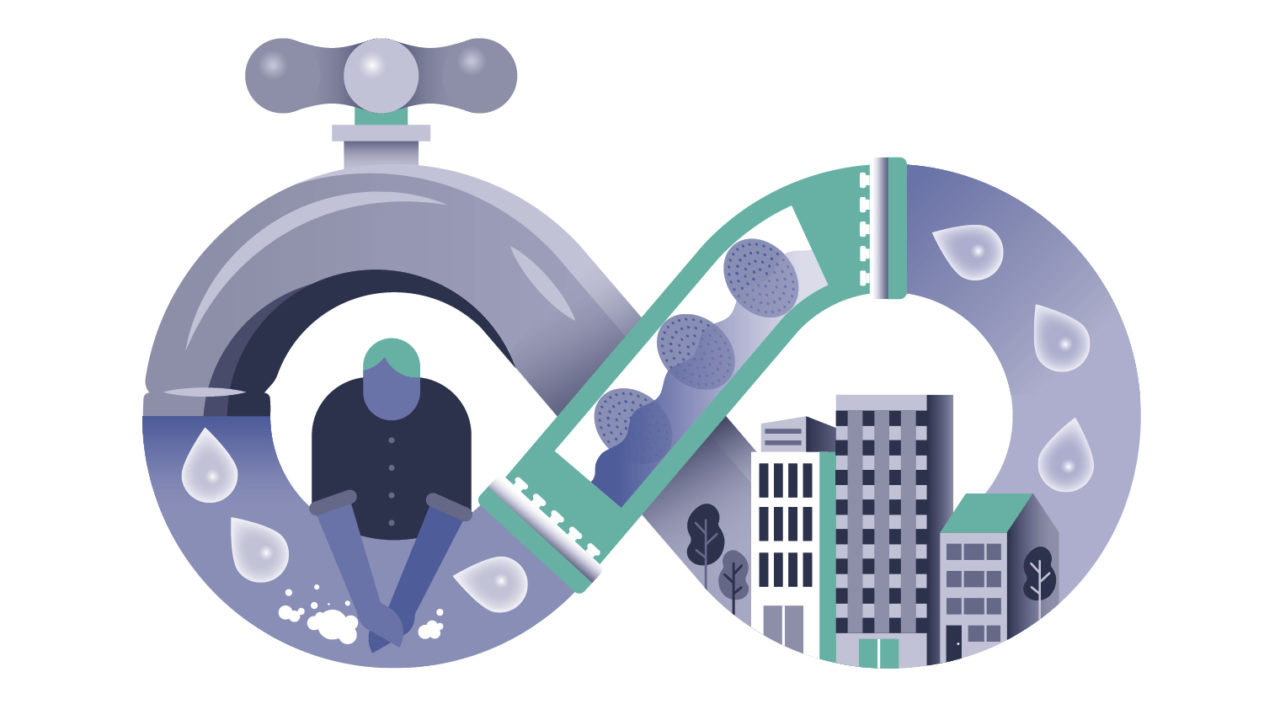 Water management in cities is a critical factor for sustainable growth and development. According to the Ellen MacArthur Foundation, a growing global population that is increasingly urban means demand for water is increasing at 2 per cent a year. With one in four cities already suffering water stress, by 2040 global demand could exceed supply by 50 per cent.

Historically water has been viewed as an asset and once used, whether in a consumer, commercial or industrial environment, it became waste. In a world of increasing resource scarcity, however, the way in which we look at wastewater is changing.

Wastewater treatment is key to any sustainable water system

According to the Organisation for Economic Co-operation and Development (OECD), the key water areas to be addressed in any integrated water management system are reduced water use, reuse and sludge management. While rainwater harvesting, sustainable urban drainage systems, water efficiency, leakage reduction, smart metering and water tariffs all have a role to play, wastewater treatment lies at the heart of any closed-loop water management system.

As Rudy Rooth, principal consultant at DNV GL in policy advisory and research for sustainable energy use, points out: “The downstream side of the water cycle can add value to the smart city agenda through a number of avenues.

“Proper water management can give value to materials previously deemed harmful or even dangerous for the environment. For example, wastewater contains a lot of nutrients – nitrogen and phosphates – that can be recovered at the wastewater treatment plants and used in fertiliser.”

Ricardo Cepeda-Márquez, technical lead for water and waste at C40 Cities, says some 80 per cent of wastewater globally is released untreated. But he adds: “There are environmental urgencies in relation to sanitation and health, in the transportation and treatment of water, but there also strong near-term opportunities and concerns about methane capture and utilisation from wastewater treatment.”

In Auckland, for example, the city has a wastewater treatment target to make the energy system self-sustaining by 2050. This is being done by using the methane emitted in the system to generate energy, providing double benefit through the mitigation of greenhouse gas and air pollution. If the resources in wastewater can be valorised, it could shift wastewater treatment from a cost to a profit centre.

Another area gaining traction is the idea of effluent reuse for water supply. Chris Binnie, visiting professor at Exeter University, notes: “As population grows and water resources resilience diminishes, there is greater need to consider effluent reuse. In UK there are already many indirect schemes, where the highly treated effluent is diluted with river water.

“Direct reuse is not used in UK, but is at Windhoek in Namibia. In the UK several water companies are planning more indirect effluent reuse schemes. Since effluent will be available during a drought, such schemes improve water supply resilience.”

This idea has proved unpopular in the United States and Australia, but with growing demand, there is an increasing need for such treatment. When Singapore introduced water recycled from sewage, it created a new brand, NEWater, to encourage comfort with high-grade recycled water.  It is, however, still used primarily for non-potable industrial purposes. While Singapore does have its own reservoirs, around 30 per cent of the city-state’s water is now recycled, with the rest derived from desalination and imports.

Innovative developers are already getting in on the act. In Sydney’s inner-city suburb of Barangaroo, developer Lendlease has built a complex intended to be water positive, using a purple pipe system. This means the complex will minimise draw on the water infrastructure and carry out onsite cleaning, collecting and ideally feeding water back into the city system.

Mr Cepeda-Márquez concedes that some cities are wary of such approaches by developers, concerned that if there’s a problem, city officials will be held responsible. It can be difficult to retrofit existing infrastructure in large cities, but smart districts and developing cities are making progress in implementing these systems. Nonetheless, there is a growing focus on decentralisation and water independence while the concept of distributed wastewater treatment systems remains aspirational.

The complexity of the issues that water management brings to a city have seen the OECD launch its Principles on Water Governance, calling for water in cities to be managed in a sustainable, integrated and inclusive way. This requires water to be adequately governed across scales, authorities and policy domains.

Oriana Romano, policy analyst for the OECD’s Water Governance Programme, concludes: “Technical solutions to water-related challenges often exist and are well known; what is challenging is the political economy environment to put them into practice. The take-home message from our work on water governance is ‘fix the institutions that ultimately help fix the pipes’. In a world where both excess water and water scarcity are becoming critical issues, smart cities must find new ways to manage the challenge.”