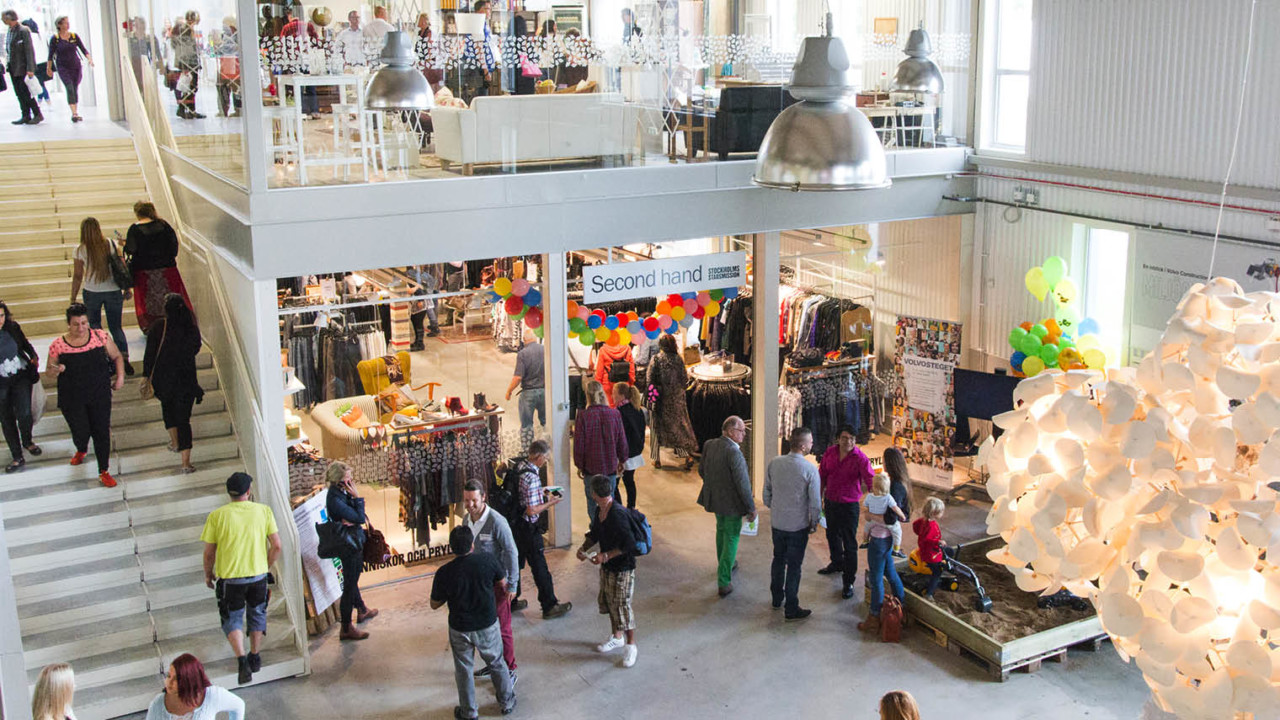 In the Swedish city of Eskilstuna 70 miles west of Stockholm, the ReTuna Återbruksgalleria mall looks like any other shopping centre. For all intents and purposes it is, except for one notable difference – nothing on sale is new.

ReTuna is the world’s first recycling mall, dedicated to repaired, recycled and upcycled goods. Opened in August 2015 and owned by the local municipality, it is managed by local non-profit organisations and businesses.

The idea originated from the local authority’s plans for meeting its European Union waste management targets. Rather than open an additional recycling centre, Eskilstuna officials saw an opportunity to create a commercial entity that contributes to sustainable living.

“The idea for the shopping mall came out of the need to have a place where you can buy new things that are upcycled or repaired,” says Anna Bergström, ReTuna’s co-founder. “We wanted to see how we could reuse things that were typically thought of as waste.”

While ReTuna was opened for environmental reasons, it’s now being looked to as a pioneering model for combating one of retail’s biggest challenges – waste. A recent report by the Ellen MacArthur Foundation found that less than 1 per cent of material used to produce clothing is recycled into new clothing, and the estimated cost to the UK economy of landfilling clothing and household textiles each year is approximately £82 million.

At ReTuna, the founders want to demonstrate that combating waste can be commercially viable. “We run the mall like any other mall,” says Ms Bergström. “Everything we do is the same as in other malls; the thing that is different is our products.”

Locals donate goods to the mall ranging from clothes and books to furniture and electronics. The shop owners then repair or upcycle the goods and sell them on for a profit. “We want to save the planet and make money out of it,” adds Ms Bergström.

ReTuna is open seven days a week and receives around 700 visitors every day. In a city of 100,000 inhabitants, the numbers are enough for the store owners to keep their doors open and employ one staff member.

Like any other sustainable business, green goals are baked into the model so while the mall aims to be profit-making, it also has environmental targets to hit. The store owners are interested in profit, whereas the municipality is concerned with waste reduction, job creation and the mall being an example of conscious living.

Ms Bergström believes these goals can exist harmoniously. “Instead of talking about how much waste we have reduced, we talk about the turn over,” she says. One way to measure the success of the mall is to think about its turnaround as the number of products reused rather than thrown away. The 2016 turnover was (Swedish krona) SEK8.1 million (£710,000) and in 2017 it rose to SEK10.2 million (£894,000).

ReTuna’s model is a textbook example of the circular economy in action, in which used goods are put back into the supply chain rather than binned. The concept is one promoted by the World Economic Forum which, in a 2014 report, estimated the economic gain from material savings alone to be more than $1 trillion a year.

Larger retailers are also beginning to look at the circular economy. “We’re starting to see much more interest in upcycling, recycling and circularity across the industry,” says Jason Kibbey, chief executive of the Sustainable Apparel Coalition. “Clothing and fashion giants are experimenting with new models to take back and resell their products.”

Running a recycling mall, however, is not without its challenges. Ms Bergström says that one of ReTuna’s biggest challenges is selling textile products. While repaired electronics and upcycled furniture are very popular, it’s harder to shift secondhand clothes.

“We don’t have any really good designers who could redesign clothes that you would want to have,” she says. However, Ms Bergström remains hopeful and believes malls like ReTuna will be the future of retail, concluding: “If businesses can see that you can make money and also be sustainable, everybody will want to change.”