In 2018, IKEA unveiled a plan to become a circular business by 2030, eliminating waste with a commitment to use only renewable or salvageable materials across its entire range. Coca-Cola, which manufactures 3 million tonnes of plastic packaging a year, has since confirmed Sweden as the first market in which all its bottles will be produced from 100 per cent recyclable materials.

This is the circular economy, where reuse and recycling prevail over raw materials and extractive ways of working.

P&G, adidas and countless other household names are also changing some of their production methods and processes in a move away from a linear economy to one less reliant on natural resources.

For some companies, though, circularity is the linchpin of their entire proposition. And as well as cementing their status as an environmentally friendly business, it’s an approach that can drive economic growth.

With the United Nations forecasting the world’s population to reach 9.7 billion by 2050, the stress on Earth’s natural resources is only set to increase. Against this backdrop, the environmental benefits of the circular economy are clear: less waste goes into landfill and less water is used, resulting in lower greenhouse emissions.

As a new era of sustainability dawns, the business case is just as clear. A recent study from Nielsen found that 81 per cent of global customers feel strongly about companies’ need to implement programmes that improve the environment.

“Once a business has established or switched to a circular process, it has the opportunity to leverage this point of difference to align with the values of the rapidly growing segment of society that are conscientious consumers,” explains Chris Norman at GOOD Agency, which advises brands on sustainable strategies.

A big business seeing the monetary benefits of doing just that is Schneider Electric. As well as using recycled content and recyclable materials in its products, the industrial engineering equipment manufacturer has been rolling out a growing range of services to help customers extend the life of ageing products. These include leasing and pay-per-use options and take-back schemes which ensure discarded apparatus doesn’t end up in landfills.

Circular economy solutions now account for 12 per cent of the group’s revenues. By 2021, the French-based business intends to avoid consumption of 120,000 tonnes of primary resources and cut CO2 emissions at the customers’ end by 120 million tonnes.

Firms that use natural resources to make disposable products is the equivalent of torching a car after every drive, then buying a new one

In Europe alone, applying circular economy principles could unlock £1.5 trillion of value for the economy, according to the Ellen MacArthur Foundation.

One industry ripe to capitalise on this is the renewable energy and waste management sector. Promising upstarts have already emerged in this space including Cambrian Innovation, which has developed technology that decontaminates dirty water and creates a clean biogas energy source.

Elsewhere, Finnish company Aquazone has developed its own method of upcycling wastewater into fertiliser. At the end of 2019, it was acquired by Operon Group Oy, which already boasts revenues of £11 million, showcasing the potential for profitability. 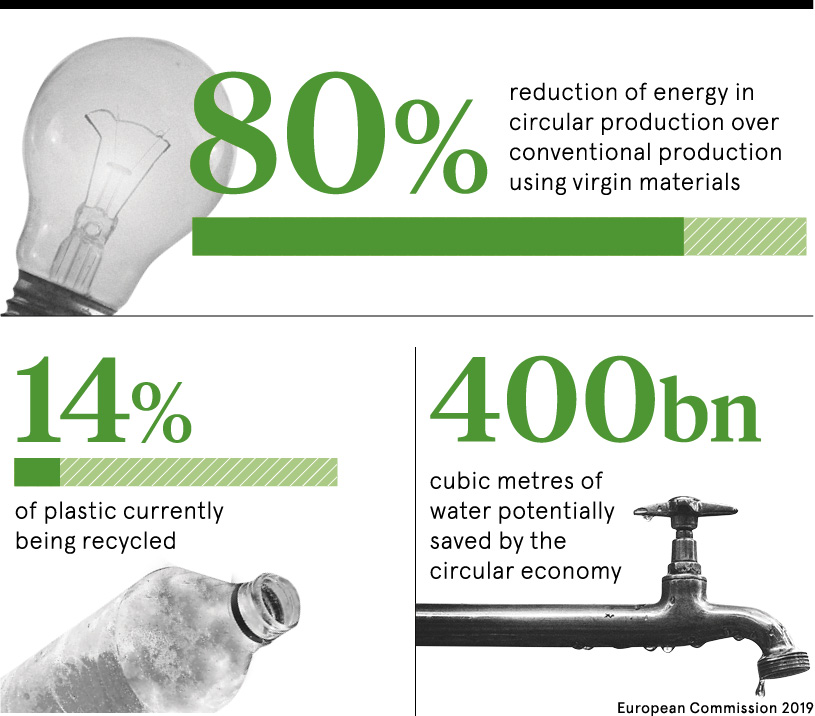 Unlike water, some materials are harder to reuse or repurpose. That’s where firms like Terracycle come in. The recycling organisation provides circular economy solutions for businesses, including its zero-waste packaging system Loop, which enables fast-moving consumer goods giants such as PepsiCo, Unilever and Nestlé to sell products in high-quality refillable containers. Customers pay a deposit for each one, plus the cost of the product inside, then notify Loop when it needs refilling.

In September 2019, the upstart’s revenues rose to $11.2 million representing a 16 per cent year-on-year growth.

Looking beyond the everyday essentials consumers pick up off the supermarket shelf, another sector looking to drive significant behavioural change through the recycling and repurposing of materials is textiles.

According to the fashion industry-led Circular Fibres Initiative, less than 1 per cent of the material used to produce clothing globally is recycled into new clothing.

Making green choices has to make sense for brands

Such statistics have set the stage for green activists to lead a shift away from fast fashion towards sustainable wardrobes and make space for brands such as Teemill, which has found success in repurposing old, tired clothes and open sourcing its methods.

The business has developed a circular production process that turns old T-shirts into new ones. “Companies that take natural resources out of the ground and then make products designed to be thrown away have a business model which is the equivalent of torching a car after every drive, then buying a new one,” says co-founder Mart Drake-Knight.

The entrepreneur reveals his original ambition was to make clothes using natural materials and renewable energy, but when he tried to do so “everything got more expensive”. The economy, he argues, was “set up to punish brands for trying to do the right thing”.

Drake-Knight doesn’t reveal numbers, but says his business model is translating into financial success, saying the company has doubled in size every year since its 2018 relaunch.

Like fashion, food is an additional area where enterprises are finding success in the circular economy. Data from the Ellen MacArthur Foundation shows that 31 per cent of food produced in the UK is lost or wasted, both throughout the value chain and as consumer waste.

Toast Ale is looking to tackle the issue in a novel way, turning one of the most frequently wasted foodstuffs, bread, into beer.

The business was on course to hit £1-million revenue in 2019, according to founder Tristram Stuart, who has credited the “good mark-up from grain to beer” for its gains.

What’s certain is companies embedding circularity within their business are finding ways to save the planet and turn a profit at the same time, something that’s not hard to raise a toast to. 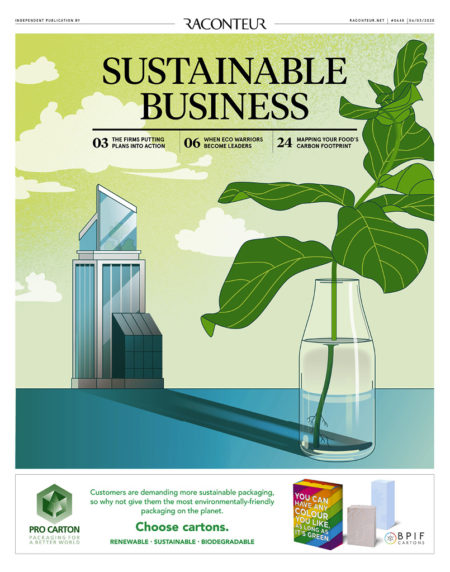