The global economy may be improving, but the fear of a new crisis is never far away – impacting how organisations set up and run their supply chains.

According to figures from Zurich Insurance, 81 per cent of businesses experienced at least one supply chain disruption last year. Its Global Risks 2015 Report identified geopolitical tensions, in Ukraine and the Middle East, for example, as the most significant threat to organisations in the year ahead.

“Interstate conflicts can have a detrimental effect on supply chains and, as new sanctions come into place, businesses may see some of their suppliers affected,” says Nick Wildgoose, global head of supply chain at Zurich Insurance. “We have also seen a marked rise in technological risks, in particular cyber attacks. Businesses that work with a multitude of suppliers often allow vendors to access their own systems and could ultimately be offering a direct route for hackers.”

The turbulent geopolitical and economic environment means organisations’ supply chains need to be more flexible, and supply chain leaders need to factor in the costs of potential disruption. “Today, managing costs is about moving more quickly towards agile supply chains, which allows for rapid response to changing market conditions and variable cost structures that ramp up and down with revenues,” says Gerard Chick, chief knowledge officer at Optimum Procurement Group.

“Flexibility is the antidote for cost volatility and to improve the organisation’s cost structure and bring growth.” Supply managers need to create interconnected networks of suppliers and manufacturers to help with this, he believes, drawing on intelligent modelling capabilities to assess the cost, quality and time implications of any decisions.

The move towards an on-demand economy, based around shorter lead times, is also increasing pressure on supply chains, says David Noble, chief executive of the Chartered Institute of Procurement and Supply. “Products are beginning to be commoditised quickly and can be produced in small labour units,” he says. “Those that execute better and faster than others will fare better.”

Technology will have a role to play in helping supply functions cope with these increased challenges, both in planning and designing supply chain operations, and in the movement of goods. Much of this will come from the so-called internet of things (IoT) made up of intelligent devices that can communicate with each other and alert organisations to potential problems or shortages.

“The basic effects of IoT are already being seen as businesses put RFID [radio-frequency identification] chips and QR [quick response] sensors into products to track them across the supply chain,” says Hans-Georg Kaltenbrunner, vice president, manufacturing strategy, Europe, the Middle East and Africa, at JDA. “In the near future, machinery beyond premium cars will actively send performance metrics back to manufacturers, making it easier for them to pre-empt maintenance needs before faults occurs.”

Big data is also having an impact, allowing organisations to better predict what will be needed and where, as well as in the logistics of moving goods around, as long as it can be used effectively. “Even more information is available to help make planning inventory more accurate, but it can soon overwhelm people,” warns Melissa Cupis, managing director of AGR Inventory. “Technology can help to bridge that gap by turning data into useful information at the right point in the process. A good example would be the availability of free weather data or social likes as an input into supply chain planning.” 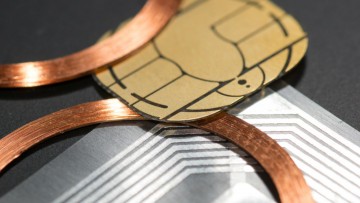 RFID chips are used to track products through the supply chain

The procurement function is also undergoing significant change in the wake of the end of the financial crisis. Closer relationships with finance departments have meant a new level of cost reductions in the region of 15 to 20 per cent in some categories, says Rob Woodstock, managing director, operations strategy, at Accenture, while the procurement is also much more involved in supporting growth and transformation than was the case before the downturn hit.

In addition, the digital revolution is impacting procurement in both the nature of suppliers with which it liaises and the speed with which it has to engage. “The sourcing team is presented with the challenge of working with much smaller organisations where there is little historical information,” says Mr Woodstock. “The speed and style of contracting has to be far more agile than a traditional long-term sourcing process and relationship.” The development of supplier networks also requires different skills, he adds, including being able to encourage innovation from partners.

Alongside developing a supply chain that is equipped to cope with the increased pressure on organisations is the ongoing need to run operations in a responsible manner, after a spate of recent supplier-related scandals.

“The risks are as great as ever as global trade continues to grow,” says Professor David Menachof, Peter Thompson chair in port logistics at Hull University Business School’s Logistics Institute. “How do you make sure that your firm has an ethical supply chain, avoiding modern slavery or child labour, for instance, with one of your suppliers or suppliers’ suppliers? None of the global names wants to risk their reputation over an event that could be prevented with forethought in the design of their supply chain.”