Tailored to your team, benefits can be the decisive differentiator which attracts the best recruits and retains star staff members

More organisations are waking up to the need to engage employees and offer at least some form of benefit packages. But with pensions becoming less of a differentiator in the wake of auto-enrolment, it is perhaps no surprise businesses are seeking more creative ways to stand out from the crowd – to attract and retain staff. 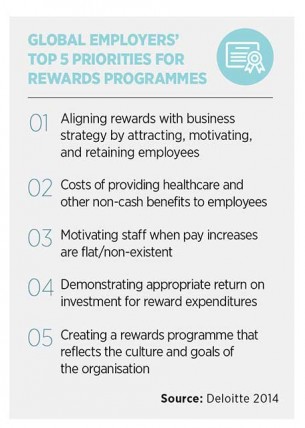 As a provider of rewards itself, Reward Gateway knows it has to put into practice what it preaches to others. As well as benefits including an employee share plan, staff lottery and the ability for staff to purchase iPads through interest-free loans, it also offers wedding and baby bonuses, of £1,000 and £500 respectively, designed to help employees meet the costs associated with getting married and starting a family.

“When we were founded back in 2007, the majority of employees were in their early-20s,” recalls Tracy Mellor, group people director. “As we developed, so did our staff’s priorities and we realised that what had been important to staff previously – team lunches and drinks on a Friday night – weren’t quite as high on their to-do list any more. So we asked employees directly to find out what would really make a difference to them, and the answer was financial help to ease them through the beginnings of married life and parenthood.”

For Black Pepper Software, the emphasis is on building up a strong social scene, with regular team away-days and an annual trip to a major European city. This year, employees and their partners will head to Dusseldorf, while previous trips have seen them travel to Florence, Copenhagen and Amsterdam. “The team is encouraged to split off into groups, enjoy themselves and self-organise group activities, although we do have one meal together as a business during this time,” says company director Mark Stevenson.

The company offers more regular informal away-days, where the emphasis is also on socialising and team-bonding. “These are a great way to build rapport and increase morale throughout the business, as well as rewarding staff for the incredibly hard work they put in throughout the year,” he adds.

Communications agency Atomic has taken the experience concept a stage further, allowing staff to create their own “bucket list” and contributing money to help make this a reality. “We wanted to offer a benefit that challenges the norm and inspires our people to think big and stretch their comfort zones,” says director Judy Wilks. “So far, people have chosen everything from skydiving and swimming with dolphins to cake decorating and piano lessons.” One employee used her allowance to trek to Everest base camp, Ms Wilks adds, while her own ambitions are more modest – she’s planning an “owl encounter” later this year.

The business also whisks its staff away just before Christmas each year to a secret location. “People get told to turn up at, for example, Gatwick Airport at 7am with their passports,” says Ms Wilks. “Last year we all went to Munich. People get really excited about it, to the extent of googling any details sent out beforehand to try to figure out where we’re going.”

Not all initiatives have to cost money, however. Talent management business Rethink Group has helped to motivate and reward staff by offering them the ability to take a sabbatical. “The best example of this is one of our employees who recently undertook the Hajj-to-Mecca pilgrimage,” says Michael Bennett, managing director and co-founder. “While the pilgrimage itself lasts a week, the visits to various religious sites and everything that comes with it can take up to a month, which is obviously very difficult to plan around.

“When our employee came to us with this request, we realised it was of significant importance to her and looked to find a solution. We were able to grant her an extended period of leave; after all, the alternative was potentially losing or demotivating a valuable member of our team.” The employee returned more focused and committed, prompting the business to make such trips available to all staff, regardless of the length of service.

For Crunch Accounting, the focus is on creating a more vibrant and healthy office environment. “We realised that lots of our team were eating their lunches at their desks while they worked and spending the entire day in front of their screens,” says Helena Mann, operations manager. “We recognised this wasn’t a good situation so we did a few things to address it.”

The business set about creating a number of breakout areas where people could go to have time away from their desk and eat their lunch, and also introduced free breakfasts. “Going straight from a stressful commute into work isn’t good for anyone’s wellbeing, so we encourage people to grab a bowl of cereal or some fruit and chat with colleagues before they start the day,” says Ms Mann. “It’s a much more relaxed way to start the day.”

Digital marketing agency Ph.Creative, meanwhile, has developed a system designed to enable staff to reward colleagues for their efforts and encourage them to demonstrate the kind of behaviour it expects. Employees are given five poker chips at the start of each month, which they can then give to others in recognition of their hard work or help on a particular issue. At the end of the month those with the most chips are rewarded, both through a treat and the recognition that comes with it. 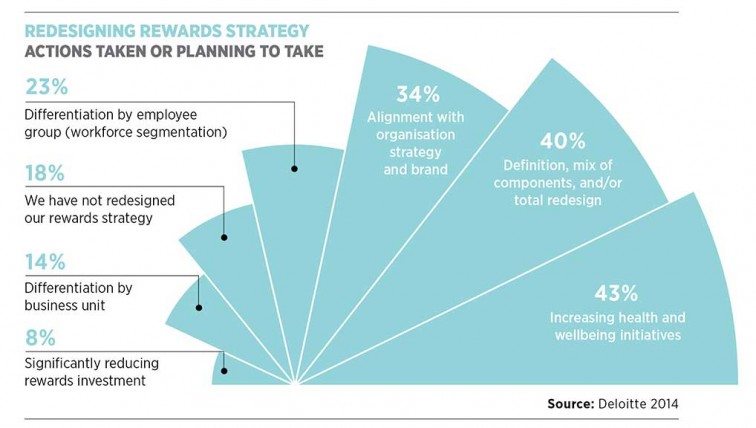 “There’s anything from a crate of Peroni to a dinner date for two, a family day out or a weekend away, through to cold, hard cash,” says Bryan Adams, chief executive and founder. “We find more than anything, though, that having your name called out and celebrated with the wider team is as much a reward as the physical ones. Recognition is very important – it’s as revered as the ‘players’ player of the year’ award at the end of a football season.”

Peer recognition is important at catering firm Lexington, which runs an annual chef of the year and barista competition. “These help galvanise and engage our team, as well as encourage innovation and creativity,” says chief executive Mike Sunley. “They are a fantastic way to showcase the fabulous work our team is doing and it gives us another opportunity to recognise those who stand out.”