Virtual reality, for so long considered an expensive novelty, is on the cusp of a real breakthrough, as sports broadcasters pump money into immersive technology 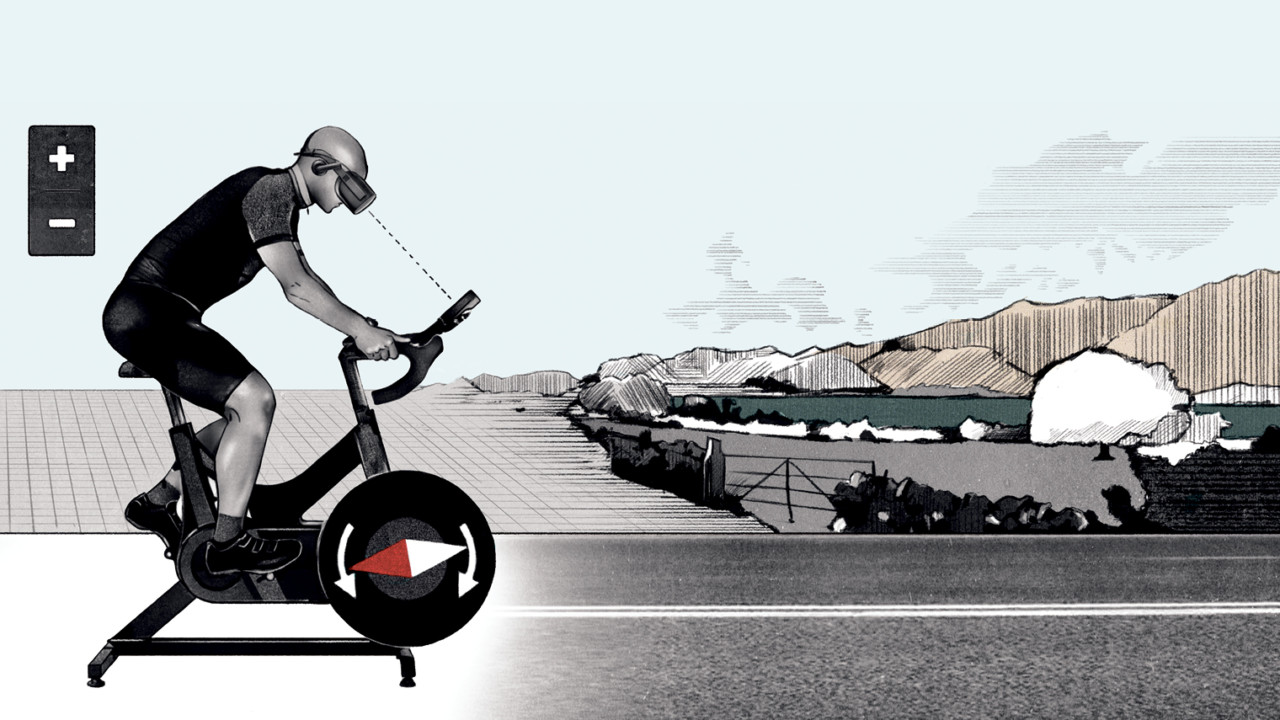 Most evenings after work Dundee-based computer-software designer Aaron Puzey can be found in his living room, cycling the gruelling 1,500-kilometre route from Land’s End to John O’Groats, using a virtual reality programme he created for himself.

The 44-year-old Australian may not have physically moved forward a millimetre, but he has been peddling away on an exercise bike in his spare time since early May and hopes to reach the northernmost point in mainland Scotland by Christmas. “It’s been a great way to see Britain,” he says. “The Lake District was sensational.”

Puzey hooked up his exercise bike and a VR headset to Google Street View and wrote some software to sync and measure his progress. It feels “50 per cent real”, he says. “Navigating a highly constrained 3D world is not always perfect,” he concedes. “Some things, such as buildings, appear quite solid, while other elements – trees, hedges and anything lumpy – often look a mess.”

Even so, the technology is advanced enough to genuinely trick the mind into believing it’s there, he says. “It’s surreal when I stand up on the pedals in a bid to peer over and beyond a hedge only to remember that I’m in my living room on an exercise bike.”

Virtual reality has seemed poised for a mainstream breakthrough for years. In 2014, Facebook paid $2 billion (£1.6 billion) for Oculus Rift, a startup that had developed a VR headset for gaming. At the time, CEO Mark Zuckerberg said it was a bet on the platform of the future, with applications across entertainment, social networking and education.

“Imagine enjoying a courtside seat at a game, studying in a classroom of students and teachers all over the world, or consulting with a doctor face to face – just by putting on goggles in your home,” he wrote after the acquisition.

This October, Zuckerberg told a conference that a million people a month were already using VR technology. The company’s $600 VR headsets went on sale in March; competitors from Google and Sony followed in October. Juniper Research forecasts that the VR hardware market will grow from $5 billion in 2016 to $50 billion in 2021; Heather Bellini, leader of Goldman Sachs’ technology research group, predicts that the market for VR and augmented reality – technology that superimposes information over the top of the real world – will be worth $80 billion by 2025.

Driving that growth will be sports broadcasters and the teams themselves, many of which have become massive global media brands in their own right.

“Sport has the opportunity to help VR break through into the mainstream with tons of new applications coming to market for athletes, sportsmen and everybody who enjoys to work out, now and in the short-term future,” says Cambridge-based technology analyst and futurist Rudy de Waele.

Tugged at by Silicon Valley’s trailblazers, US sports have already put real money in to the technology. The first game of the 2015 NBA basketball season was streamed in virtual reality; since then baseball, American football, ice hockey and Nascar [stock-car auto racing] have all been broadcast in VR.

During the Rio Olympics, the BBC in the UK and NBC in the US gave viewers access to live and on-demand VR coverage. In May, the unlikely crowning of Leicester City as football’s Premier League champions was packaged for Sky Sports by Surround Vision, a UK VR company, putting viewers right in the middle of the ticker-tape parade. Erfan Saadati, Surround Vision’s head of VR, says the clip was watched almost two million times in 24 hours. Sky has since launched a virtual reality app, letting users sit ringside at a heavyweight boxing bout, and go behind the scenes with teams preparing for a Formula One race and the Tour de France. Niche sports are also taking a punt: in India, October’s Kabaddi World Cup was streamed live in stereoscopic VR by local broadcaster Hotstar.

With large and established fan bases looking for more and better access to their teams, and broadcasters always looking for an edge over their rivals in a highly competitive field, sport is a natural fit for virtual reality. The key, says Alex Kunawicz, co-founder of sports VR specialists Laduma, is making sure that cameras get close to the action, and have access to what viewers otherwise would not be able to see.

“VR puts people behind the curtain. And that immersive content, where fans feel part of it all, is really going to drive sports and clubs to be part of this VR revolution,” he says.

Venture capital and investment money is flowing into the sector. Jaunt, a virtual reality company that has made films for US sports teams, has raised $100 million in just over three years, with investors including Sky and the Walt Disney Company, according to general manager for Europe, Middle East and Africa, Dominic Collins.

“In 2013 we started with Lego bricks and GoPros,” Collins says. The native VR camera that Jaunt uses now has 24 lenses and “creates more data per second than all the high-definition cameras Sky Sports use on a Premier League match day”.

Success in the field will be less about building VR elements in to live broadcasts, and more about using the technology to give viewers “a money-can’t-buy experience”, Collins says. “As a club you have so many interesting assets you can use to engage viewers: your fans, players and previous legends, the manager, coaches, training, the ground … and so on. VR provides an infinite number of front-row seats.”

With its heritage in video gaming, VR can also be used to build in a participatory element for fans, letting them step into rugby training, or take penalties in the pressure cooker of a football stadium, deepening their immersion into the game.

Back in Dundee, Aaron Puzey is in the shape of his life as he nears John O’Groats. He is working on his own smartphone app, CycleVR, and hopes that the technology will advance quickly enough to allow users to play together in the same simulation. “That will mean you can go riding and improve your fitness alongside your mates, pointing out things of interest on the way,” he says.

He is also planning his next endurance challenge: a virtual cycle across Japan. “That’s the beauty,” he says. “Now, with the kit I’ve put together, I can ride anywhere on the planet that is covered by Google Street View.”