Achieving net-zero carbon emissions is no longer a pipe dream. It is now a realistic, reachable and non-negotiable target if we’re to combat climate change. Yet the built environment represents a huge challenge. Emissions from buildings actually went up in recent years and the industry accounts for a staggering 40 per cent of the UK’s total carbon footprint. Now, it has the potential to lead the charge to net zero.

There’s a major push for newly constructed buildings to be more energy efficient. What can’t be overlooked is that more than 80 per cent of the buildings that’ll be standing in 30 years have already been built today. This means there’s a huge priority to decarbonise existing real estate by reducing energy consumption and carbon emissions right now. The race is on.

“Our current built environment is a huge part of the problem, but with the right investment it could be an even bigger part of the solution. Not many people know that it’s more cost effective to achieve net zero in existing buildings. Sustainable new builds are great, but will still use huge amounts of resources,” explains Richard Brown, partner at Hoare Lea, a leading multi-disciplinary engineering consultancy firm.

If the cement industry were a country, it would be the third largest emitter in the world, behind China and the United States. A quarter of all of humanity’s plastic and aluminium end up on-site too, as well as half of all steel. It is a resource and energy-intensive sector.

“A big frustration we have as engineers is that buildings aren’t used efficiently either. The intensity of use can be low; think about how many empty office buildings there are every night. We need a drive towards mixed-use buildings; this way we can also design them to be easily adapted over the coming decades as society evolves,” says Brown, whose company works with councils, businesses, developers and public authorities across the UK to drive sustainability in the built environment.

Making buildings more energy efficient with lower emissions ensures they are much more attractive in the long term, not just for the owners, but for tenants as well

To fulfil the goals of the Paris Climate Agreement, 100 per cent of buildings must operate at net-zero carbon by 2050, with significant progress required in the next ten years, and all new buildings should target zero emissions by 2030. The framework for how this can be realised has already been laid out by the UK Green Building Council, which has been supported in its work by Hoare Lea and other key industry partners.

“We’ve never seen industry want change as much as today. This is no longer the tick-box exercise it was often viewed as in the past. Businesses and senior management want impactful action right now,” says Eimear Moloney, head of building performance at Hoare Lea.

“The opportunities are amazing and we can make a huge difference. Reducing emissions and achieving net zero is more achievable and affordable than people realise. It takes a systematic holistic approach; it’s about looking at building design, reducing embodied carbon in construction, reviewing building energy management and offsetting where possible.”

There are a number of steps Moloney quickly deploys when a business or organisation brings her in to look at its existing building or estate. The first is to measure what energy is being used and what carbon is being emitted. Next is a range of measures to reduce energy consumption, from optimising controls and building systems to upgrading plant and building fabric.

The third step is to establish how much energy can be generated on-site via renewable sources, such as solar panels, followed by what renewable energy can be sourced from the grid. Finally, if there are any remaining emissions, they will need to be offset through accredited offsetting schemes, such as afforestation initiatives. 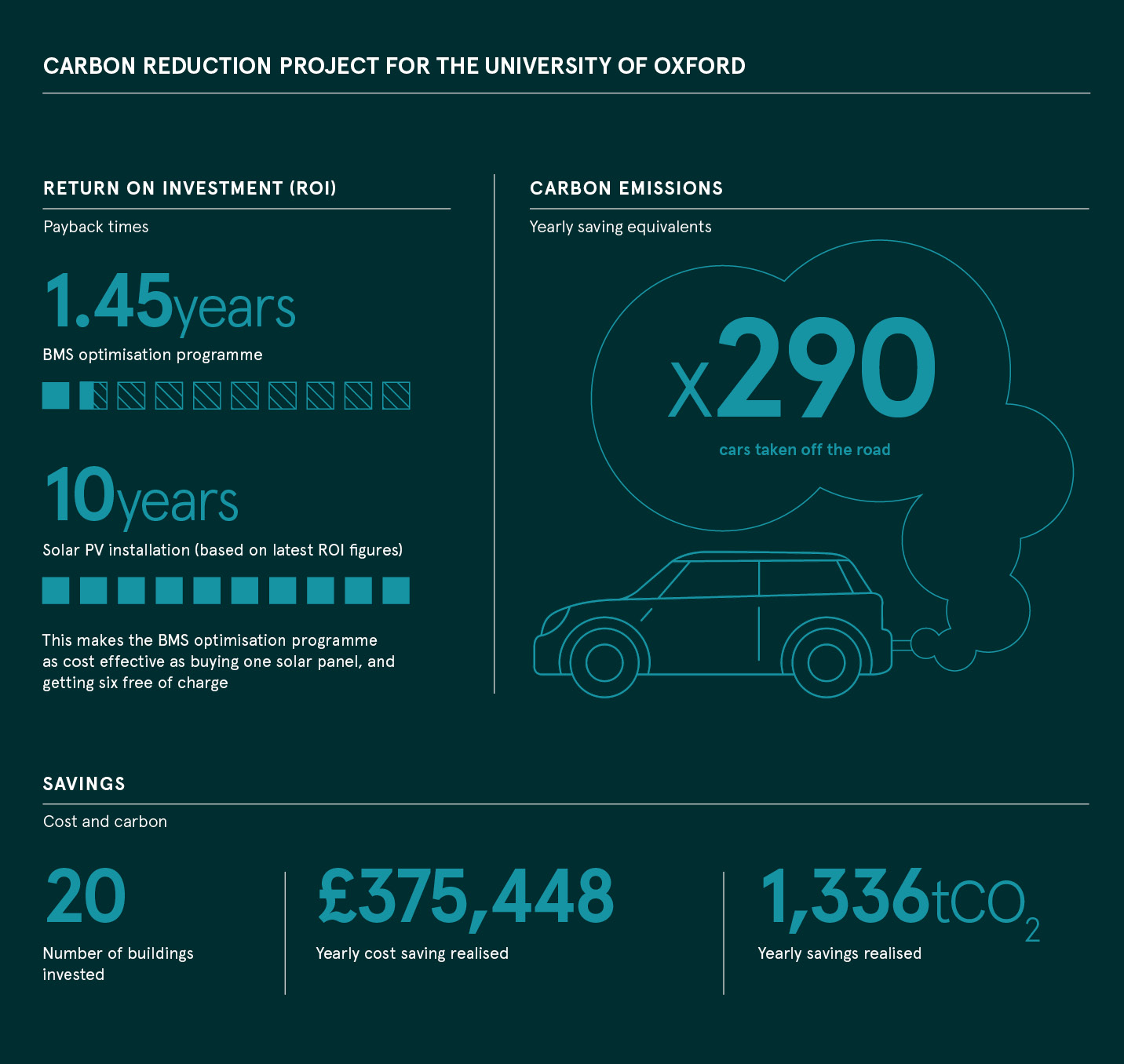 It’s impressive what can be achieved. For instance, in 2015 the University of Oxford looked to Hoare Lea to reduce its carbon emissions across 20 buildings. The process helped the estate save 1,300 tonnes of carbon dioxide a year, an investment that only took a year-and-a-half to pay back in terms of reduced energy costs.

“Most buildings in the UK are still poorly operated. I often say it’s like driving your car in first gear, it’ll run, but not at all like it could do. So, we haven’t ever come across a building that we cannot improve. Making them more energy efficient with lower emissions also ensures they are much more attractive in the long term, not just for the owners, but for tenants as well,” explains Moloney, who has worked with the likes of Ballymore, Legal & General and other high-profile global consultancy firms to reduce their carbon footprint.

Finance is a key part of the equation and is becoming increasingly available to drive down emissions. The Task Force on Climate-related Financial Disclosures means listed companies must increasingly disclose to investors the climatic risks of their portfolios, which includes real estate.

With all eyes on COP26, the climate change summit in Glasgow later this year, there’s an opportunity for UK organisations in the private and public sector to slash emissions in the built environment.

“It can seem a challenging thing to do, but it’s achievable. The UK could be a world leader. We meet a lot of energy managers and heads of sustainability in our work; what we really need is for more chief executives and chief financial officers, as well as board members, to see the potential and understand how much of a win-win it is. We’re starting to see this change, but imagine how quickly things could improve if those people chose to act faster,” Moloney concludes.