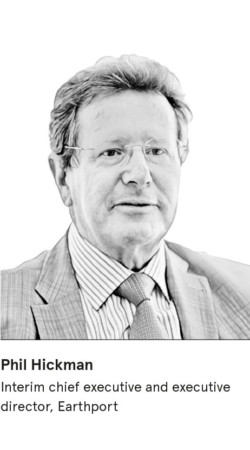 Since the financial crisis, banks have been confronted by new technologies, innovative change agents disrupting products and, latterly, new types of bank. In the UK alone, more than 50 new institutions have been granted banking licences since 2008.

Initially, this caused unease, but we are reaching a pivotal point, one that paves the way towards a collaborative future for money with digital transformation of banking critical to its success.

Global finance has, of late, been dominated by large banks that are protecting their market share from challengers, most recently from financial technology providers. However, the fintechs are no longer being considered purely as aggressors, but as enablers that can streamline efficiencies and correct shortcomings within traditional models.

It has been a slow process, but banks have been active in acquiring fintech capability, which is now seen as strategically important, as noted by a PwC survey in 2017 where 82 per cent said they plan to invest in fintech. Banks realise fintechs can create opportunities such as cost-efficiencies while enabling short-cut structural changes required to meet customer requirements.

Tomorrow’s customers include the millennial generation, which has a different perspective to its predecessors and will demand tools, such as apps, mobile payments and online banking platforms, that are more aligned to contemporary lifestyles. In a poll by BI Intelligence, 71 per cent of millennials said banking apps were an absolute priority.

Put together, bank plus fintech is an appealing proposition, creating an efficient hybrid organisation

The key to satisfying clients not only depends on consumers’ digital experience, but also banks and fintechs forming mutually beneficial partnerships. This spirit of co-operation allows banks to offer new, cost-effective services while harnessing the innovative culture of fintechs and placing it within their own structures. It is not a one-way deal; in a recent survey by CapGemini, 75 per cent of respondents said the prime business objective of fintechs was collaboration with traditional firms.

Both parties bring multiple strengths to the table. Fintechs possess innovation in abundance, along with agility and technical expertise, which can be implemented seamlessly into larger, more complex systems. Moreover, data analytics play to the ethos of fintechs that can assist banks in an increasingly strict regulatory environment, especially post-Payment Services Directive 2. 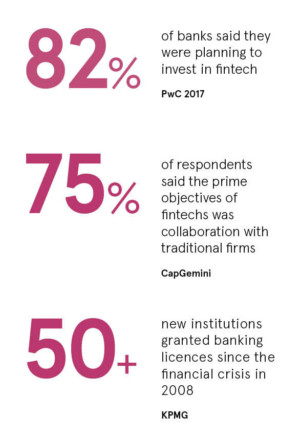 Banks have a plethora of data, but hitherto they have not discovered the optimal way to calibrate, utilise and report it. Fintechs, offering a doorway to the fourth industrial revolution, are well placed to help banks, allowing them to focus on core activities. Banks have many attributes fintech partners can benefit from such as longevity, brand power, customers, infrastructure, access to capital and trusted third-party status.

Put together, bank plus fintech is an appealing proposition, creating an efficient hybrid organisation that is all about economies of scale, innovation, deeper analytics, improved engagement and risk mitigation, and product diversity. The payment sector is central to this revolution and a whole host of products have emerged in recent years driving significant improvements for businesses and consumers alike.

Many customers do not understand why it takes days for payments to move from one country to another and why multiple fees are levied. As business continues to become more global, the efficiency and pricing of cross-border payments will remain key for customers expecting execution at the click of a button. Consequently, there has been a drive for less complexity and new systems delivering a more streamlined approach for cross-border transactions.

In this context, companies such as Earthport are enablers in providing access to the new dynamic through a variety of methods. We’re not standing alone in this mission and like others we are forming partnerships that strengthen our offering. A prime example is our relationship with Ripple.

The gateway partnership, launched in 2015, spawned the Earthport Distributed Ledger Hub and achieved notable success in 2016 when the first cross-border payment was received via distributed ledger technology (DLT) for Santander UK. The Hub provides access to Ripple’s system through a single Earthport contact. It also enables banks to embrace the digital world without heavy investment, and shows the marriage of fintech, utilities and banks can create something epitomising the
industry’s future.

The facilitation of real-time movement and settling digitised assets between banks and across borders is a clear focus point for the industry, regardless of the technology required to achieve it. While blockchain and DLT may represent the future, the demand for immediacy has been the catalyst for introducing a plethora of faster payments systems in a number of countries, even breathing new life into traditional methods such as safe and secure ACH (automated clearing house) payments.

Ultimately, banks (both traditional and challenger) and fintechs are part of an evolving inter-dependent system, a paradigm adaptable for a fast-moving and uncertain financial world.

Some developments, such as cryptocurrencies, will have to secure regulatory and investor confidence, and not all players will look the way they currently appear five years from now.  But as we anticipate this fourth industrial revolution and complete digital transformation, tomorrow’s financial services will be about creative co-existence.

Fintechs and banks will work together and the growth of new currencies, technology and new banking will be supported by utility services that speed up payments and make cross-border transactions cheaper and more transparent, while ensuring compliance and security underpins all transactions.

Let’s be clear, this is not a landscape far away from the present day – the future of money, working around a collaborative eco-system with multiple stakeholders, is already underway. 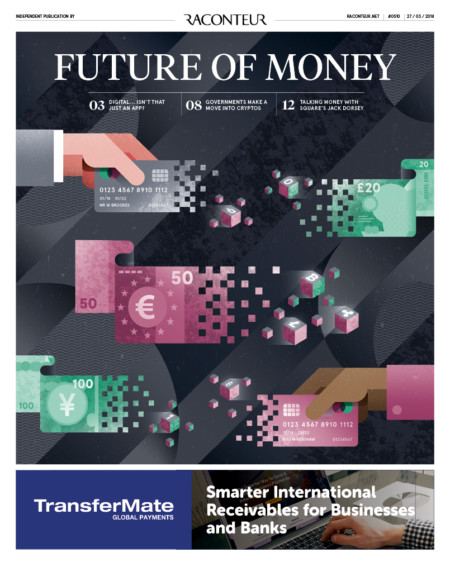