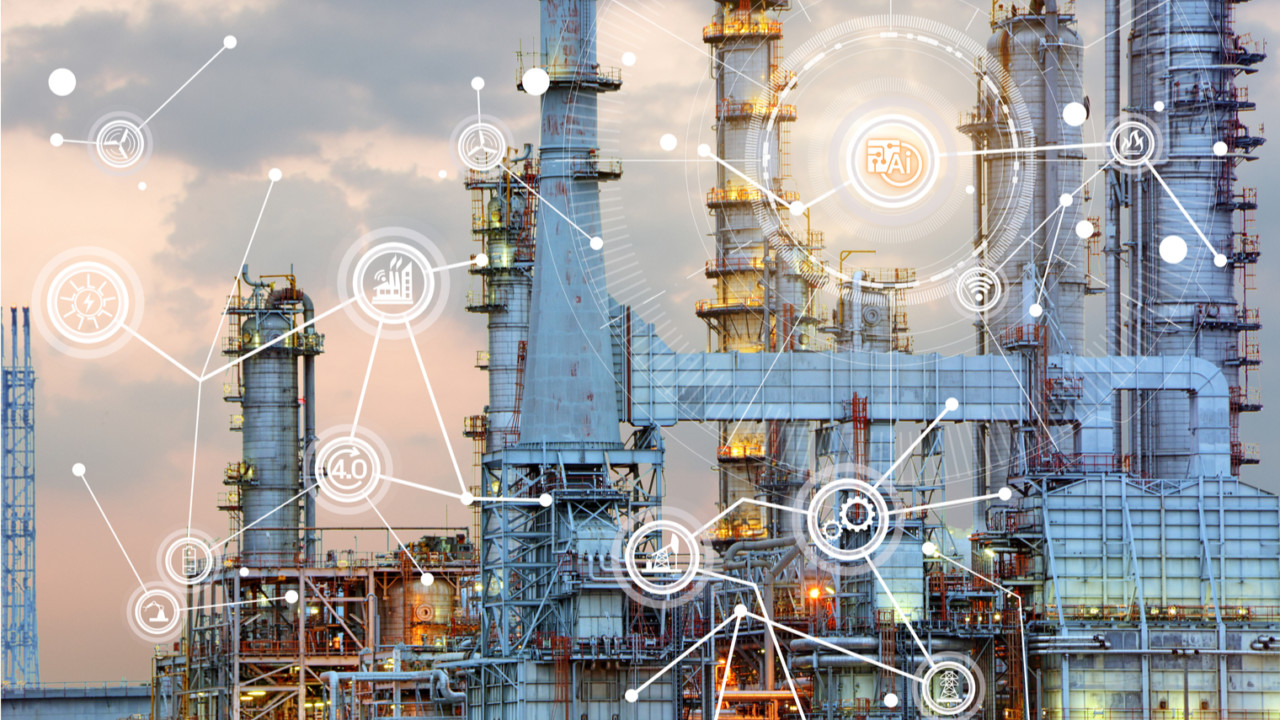 Our hundred senior decision-makers in five process plant sectors, including power generation, in 21 countries worldwide answered these questions posed by Vanson Bourne, the independent market research specialist. The wide-ranging survey was commissioned by AVEVA, a leading engineering software provider to the plant, power and marine industries. The results, published this month, reveal that almost nine out of ten power generation companies agreed with the first two questions. Surprisingly, more than half concurred with the third statement.

The digital revolution is affecting the power industry. If the last decade was about developing hardware capable of generating cheap, plentiful renewable energy, the next one will be about making energy generation systems smarter. Exponential growth in low-cost processing power, advances in big data management and growing cloud capabilities, coupled with the acceleration in analytics and machine-learning, have the potential to transform the way we produce, buy and sell electricity.

The World Economic Forum estimates that $1.3 trillion could be generated by digitalising electricity generation worldwide between 2016 and 2025 . It lists five initiatives in particular – better management of asset performance, real-time platforms data, integration of energy storage and customer-centric solutions – that it believes will individually unlock at least $100 billion of value over the ten-year period. 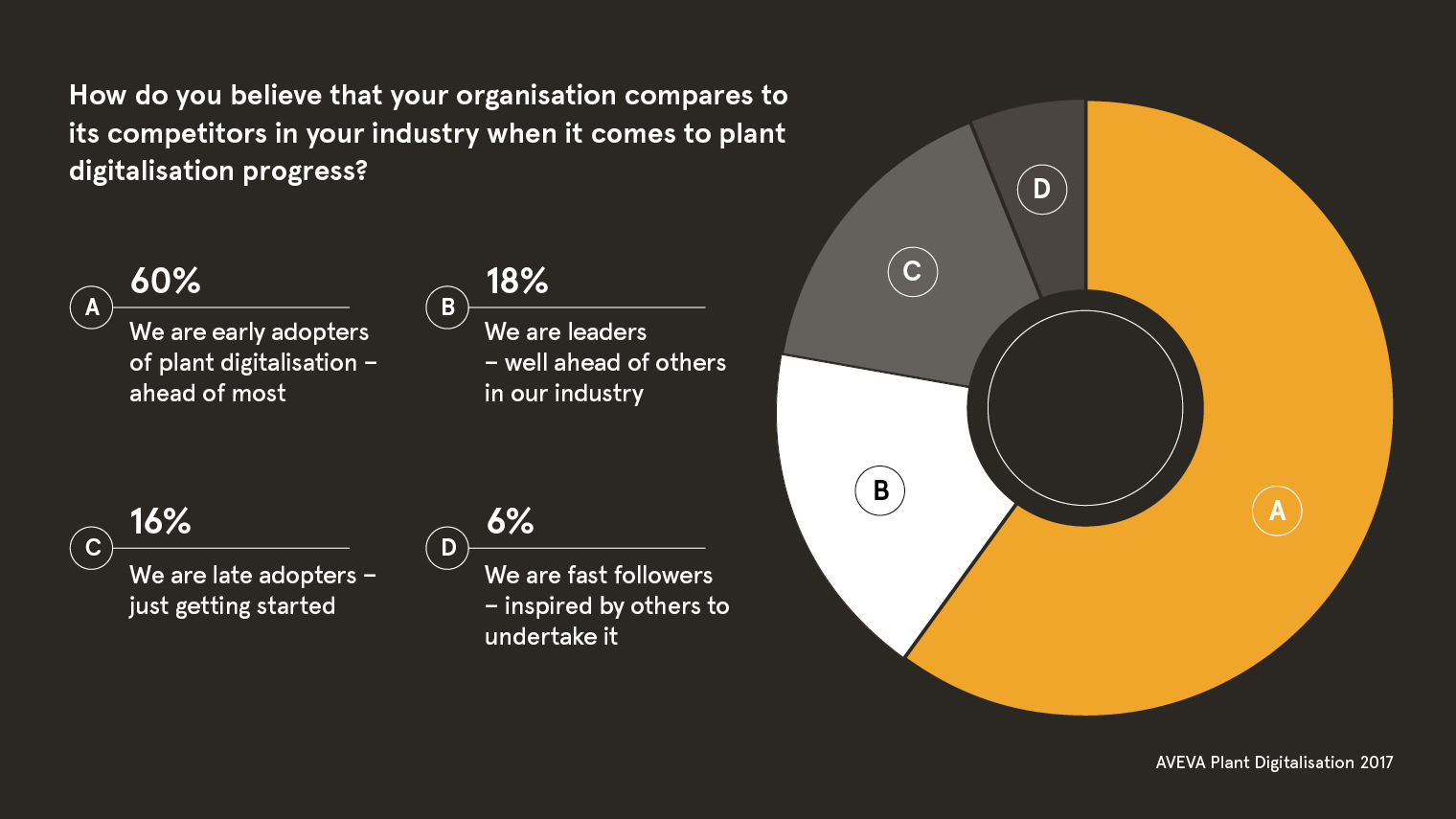 Transformation of the industry is already underway, according to a majority of survey respondents. Twenty eight per cent believe it is happening now, while a further 46 per cent say plant digitalisation is a rapidly growing focus across the industry with most organisations working on their strategy and initiatives. The remainder think it is only slowly gaining traction or in the early stages of development.

An overhaul of the power industry is long overdue. Power generation networks have become much more complex in recent years, thanks mainly to the rise in renewable energy power generation and the growing number of small, distributed power producers. Demand for power is also increasing in many countries, yet grid infrastructure is often old and creaking. Equipment is both difficult and costly to maintain, but tighter regulations are driving the industry to be more efficient and cleaner than ever.

Digital technology can help to solve some of these challenges. For instance, intelligent data systems are enabling network operators to handle large volumes of intermittent wind, solar and other renewable power, and to accommodate more distributed power producers. For plant operators, building a database that forms a digital twin version of the physical plant can lead to the development of analytics that can trigger service and maintenance actions, even before problems occur.

We know that companies are embracing digital technologies because they fear being left behind, but we also know that a sizable majority – four out of five respondents – think they are ahead of the curve. Some 78 per cent classify themselves as early adopters of plant digitalisation, while some 18 per cent believe they are leaders in the field and well ahead of the majority. Just 16 per cent confess to being late adopters, while 6 per cent say they are followers, waiting to be inspired by others.

So how exactly do power companies see digital technology helping them? Most think it will support the core fundamentals of their businesses. More specifically, over half cited cost management as a major focus, while 50 per cent viewed it as a means of optimising processes. A slightly smaller percentage picked out operations and maintenance, alongside improvements in production capacity, safety and information management.

Homing in on production performance, every respondent agreed that digitalisation has the potential to boost the production capacity of their facility by at least 10 per cent. The average hoped for was 29 per cent, but one-third said they thought it would raise production by 30 to 40 per cent, with a smaller number hoping for up to a 50 per cent increase. The survey also found that companies think digitalisation will reduce operating costs by anywhere from 10 per cent to 50 per cent, with an average of just over 27 per cent. 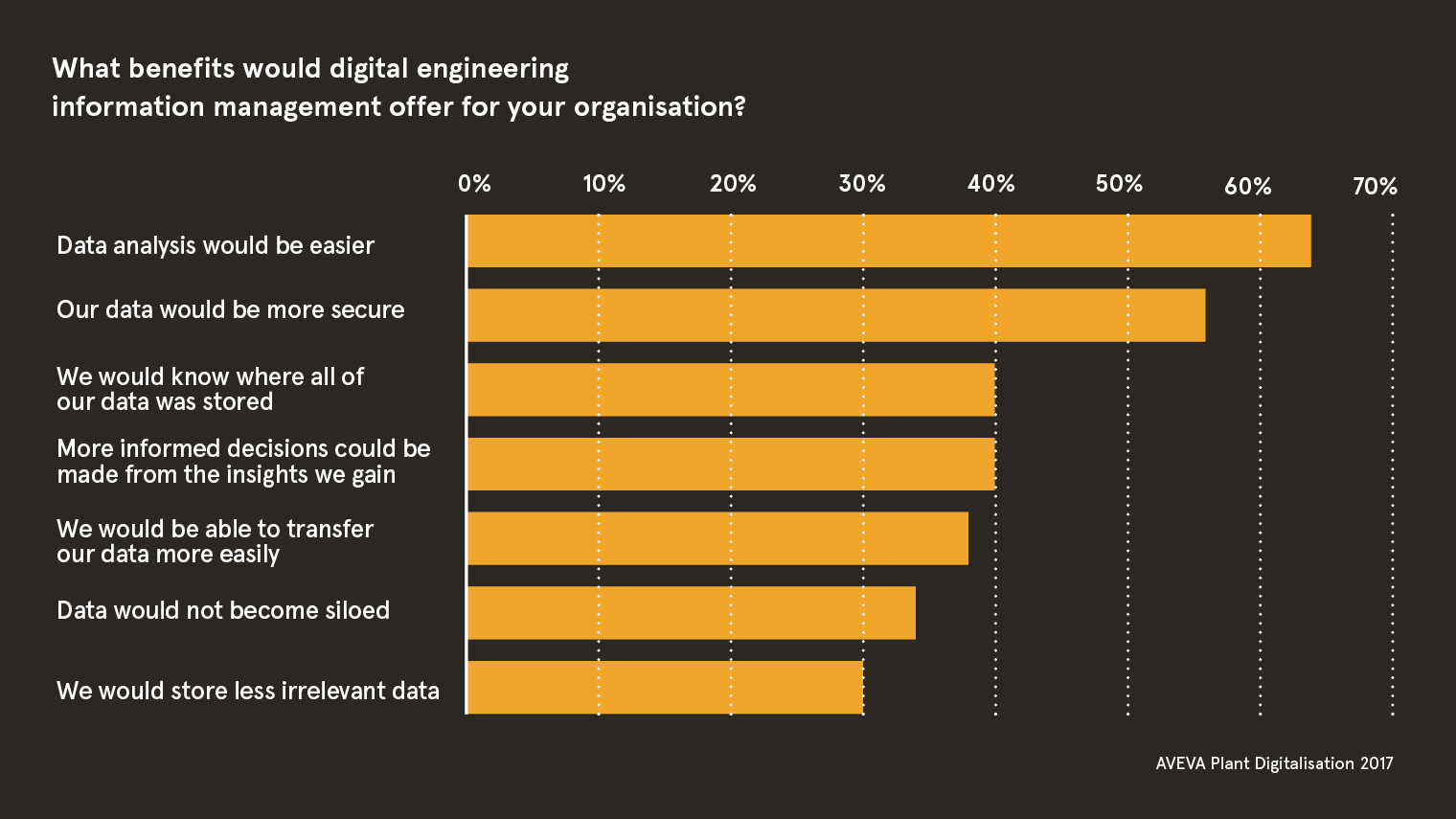 Economics and technical advantages will drive digitalisation in the energy system, but major challenges remain. Power companies are awash with data – a modern gas-fired power plant is equipped with more than 10,000 sensors – but most have a long way to go before they can use this effectively to trim costs, increase sales, and boost efficiency and reliability. Among the 400 companies surveyed, not one uses more than half the data they collect. The average is 27 per cent.

More than 90 per cent of respondents concede they have difficulties embracing digital engineering information management. Incomplete and inaccurate data are a problem for nearly 50 per cent, while 40 per cent cite a lack of real-time data as an issue. Establishing an intelligent engineering master data management system can be key to helping organisations improve on these numbers. More than 60 per cent say data analysis would be easier with digital information management and 40 per cent say it would enable them to make more informed decisions.

Digitalisation comes with up-front costs, but technology’s ability to improve productivity can pay dividends. “The case for investing in plant digitalisation is a strong one,” says Tim Miser, associate editor of Power Engineering . “Indeed, it is because of the enormous capital expenditures required by the industry that it becomes so important to wring every last drop of productivity from power assets, and software is indispensable in this effort.”

And digitalisation will bring great rewards. But it will also bring change and uncertainty to what is a relatively conservative, risk-averse industry. This timely study of digitalisation lifts the lid on what organisations are currently doing to join the digital revolution. It reveals just how big a priority digital is, what factors are driving digital agendas, the challenges holding companies back and which technologies companies are investing in.

²Ones & Zeros: How Digital Power Plants Are Leveraging Big Data and Analytics for Greater Reliability and Profit, Power Engineering 2016