Three-times Formula 1 champion Sir Jackie Stewart, who founded an F1 team which he sold to Ford in 1999 shares his views on the sport in 2016 with Joe Diamond and Kate Hewitt

There is an aura surrounding Sir Jackie Stewart. The waiters fuss around the 76-year-old Scot as he sits down for tea at his usual table in London’s smart The Berkeley hotel. He seems at home among the ornate wooden panelling and fine china.

Sir Jackie, who was knighted in 2001 for services to motorsport, is one of Formula 1’s elder statesmen. Having gone from cockpit to pit wall and several ambassadorial roles within the F1 paddock, he is one of a few people well placed to comment on just about all aspects of the sport. And comment he does.

The beauty of interviewing Sir Jackie is that one short question will yield an expansive answer dripping with detail. One of his roles is as an ambassador for luxury watch brand Rolex and he doesn’t just recall the year he got his first timepiece, but where he bought it and even who recommended it to him.

He is like a grand raconteur regaling about racing in days gone by and he isn’t afraid to share his opinion on how times have changed.

Driving is too easy

One of the biggest alterations in the world of F1 since the famous tartan graced the grid has been the driver ladder. Back then, the likes of Rubens Barrichello and Johnny Herbert were picked on raw talent, as opposed to the money-laden, nursed-and-nurtured nature of some breaking into the big time in recent years.

“This whole idea of buying drives is a very unfortunate thing and it spirals very negative structures within the sport,” he says. When you sit and listen to Sir Jackie, he has a very astute way of making even the most complicated issues seem very solvable.

“For one thing – and this sounds bad – but the cars currently seem to be too easy to drive. Almost anybody can go fast in a Formula 1 car, if it’s a decent Formula 1 car,” says the former champion.
“It’s not the drivers, it’s the cars. When the car is good now – there’s Mercedes, then there’s Ferrari, then there’s Red Bull, then there’s Williams – anybody can get in those cars and almost immediately drive them. So therefore there’s something wrong that the engineering has come to a point where too many people can drive them.

“You’ve got to look at a time where there was Jackie Stewart coming along in a Formula 3 car and people thought, ‘Hello, he’s won 11 out of 13 races, he must be quite good, so therefore he’s in a Formula 2 race now. And then he won a touring car race and then a world sportscar race’. So people then began saying ‘We better hire him’.

“There is the arrival of both Max Verstappen and Carlos Sainz Jr – both boys are very nice by the way – but what’s happening when they can get in those cars and go that fast? It must be too easy. And that’s not me saying it out of jealousy. I’m not saying that it is easier now than it was back then for me.”

Sir Jackie campaigned furiously for years to improve the safety of the sport, but does it need more danger once again, as suggested last year by Ferrari driver Kimi Räikkönen?

“People are taking liberties that we never used to take in our day. We could not run wide on a fast corner and expect to hold our positions,” he says. “The worst example of that I think was Abu Dhabi 2010. All Fernando Alonso had to do to win the world championship was to finish ahead of Vitaly Petrov’s Renault. He followed him for the entire race.

“Petrov went wide four times off the road – all four wheels – and never lost the lead to Alonso. He scrambled back on and Alonso still couldn’t get past him. That wasn’t through Alonso’s inability; it was because Petrov was still carrying the speed. That’s wrong.

“We don’t want someone hitting a telegraph pole, or a farmhouse like I did, or a grass bank like Stirling [Moss] did, but you must have something else that stops a driver. We’ve got to have something that doesn’t burst the tyre or break the wheel, but means the grip is not as good.”

Half a century ago, a young Jackie made his first foray into F1 with Lotus as an injury replacement for fellow Scot Jim Clark. Lining up on the grid in Kyalami in 1965, no one could have predicted Stewart would go on to become a three-times champion. He is in no doubt about who he most looked up to.

Clark, a shy farmer from Fife, won F1 championships in 1963 and 1965, but will be best remembered for the Italian Grand Prix in 1967 when he dropped a lap down, following a flat tyre change, before catapulting his way into the lead. He matched his pole-position time in the process only to finish third after suffering from a fuel pump failure.

Stewart and Clark shared apartments and set the standard for the next generation to beat. Sadly, Clark was killed in a Formula 2 accident in Germany in 1968, but Sir Jackie classes him as the greatest F1 driver to have lived: “I always have looked up to him, I still do. He was the absolute leader.”

Stewart retired in 1973 and since the 1970s has become a leading light in the fight to improve safety, overseeing the implication of improved cockpit protection, rigorous crash tests and effective recovery procedures. Much of this had been done by the mid-90s when, with Ford’s backing, Stewart and his son Paul formed Stewart Grand Prix which won its first F1 race in 1999. The team became the Stewart family flagship.

Sir Jackie says: “Ford said they wanted to buy our team. At which point I’m thinking, ‘Hang on, we’re making £5 million a year and not taking anything because we’re piling it back in, so that the value of the team was being added’. Finally I did the deal because they said, if we didn’t sell, they’d take their engines elsewhere.” 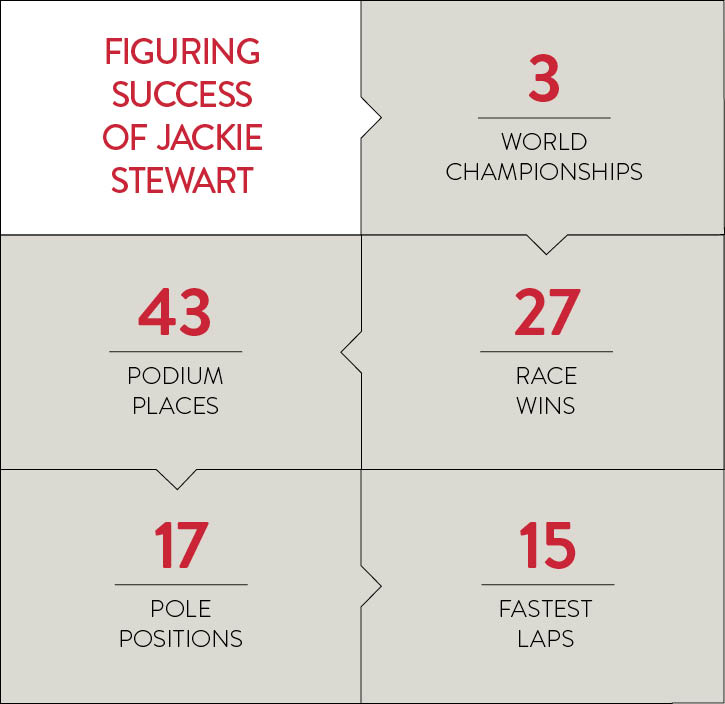 It goes without saying that the ever-increasing finances surrounding F1 have raised the pressure on teams since the Stewart grand prix years; however, Sir Jackie offers one piece of advice to the current bunch on the grid.

He says: “When it came to talking to sponsors, the minimum relationship for me was five years. And I said we couldn’t win a grand prix for five years with a new team. But if you under-promise and over-deliver, you’ll never get the sack.” Some current outfits could do well to heed these words of wisdom.