This is one vision of the near future. Chain bars gradually filling up with a Tuesday night post-work crowd. Travelators idling outside the Subway and Starbucks that click on when you approach, ready to carry you from the ‘food centre’ to the ‘fitness zone’. On the walls, bright and cheerful signs telling the residents to eat right and be happy for the sake of their health.

This is Mapletree Business City on Singapore’s west coast, a gleaming black-glass business park bulging with manicured greenery, and the centre of the city-state’s ambitious plans to become a ‘smart nation’, roping its transport, health and housing systems together using data and connected devices – the so-called ‘internet of things’ – and exploiting advances in automation to reduce the number of people needed to keep the country running.

“We do believe we’re entering the fourth industrial revolution,” says

Jacqueline Poh, CEO of GovTech, the government agency managing the programme. “We believe in the idea that we need to be a far more advanced digital economy.”

The country, which is small, compulsively orderly and highly connected, has established itself as a test bed for data-driven, autonomous urban systems. On the National University of Singapore campus, Airbus drones are delivering packages, part of a trial that will eventually extend out to the port, and potentially even ships waiting off the coast. Self-driving taxis are being tested in a 6.5-square kilometre part of the One-North business district. In October, the government put out tenders for autonomous street cleaners and self-driving buses.

In August, the deputy prime minister Tharman Shanmugaratnam came out to open an ‘autonomous café’ of hot-food vending machines, heralding it as a milestone in the country’s mission to reduce the number of workers it needs to staff its food and beverage businesses – known as “F&B”, in acronym-obsessed Singapore.

The country has good reasons to throw itself wholeheartedly into the so-called “fourth industrial revolution”, a term that was popularised by the World Economic Forum, and describes a new shift in the structure of the global economy characterised by “extreme automation” and connectivity between people, systems and things. Singapore shares the demographic challenges of Asia’s other “Tiger Economies”. Population growth has slowed, life expectancy has increased, and today its age dependency ratio – the number of over-65s per working age individual – is 16 per cent. In 2006, it was just over 11 per cent. By 2030, one in five people will be over retirement age.

“That has challenges in the sense of how do we maintain a productive workforce,” Poh says. “As a small country, we cannot import unlimited amounts of talent, or workers from other countries, simply because this is the size we are. And we’re already very dense.

“But we can also find ways to make older Singaporeans an opportunity for us. We can find ways in which to ensure that Singaporeans are active and productive, and healthy, and in the workforce, and doing useful things for as long as they can.”

The country, which is half the size of London with half its population, has built upwards to find room for its population within its limited space, and has worked hard to build closed loops within its infrastructure. Its infamously draconian laws on littering are in part down to a philosophy that cleanliness and civil order are intrinsically linked, and in part because so much of the city’s water is recycled that it needs to keep the drains clean. 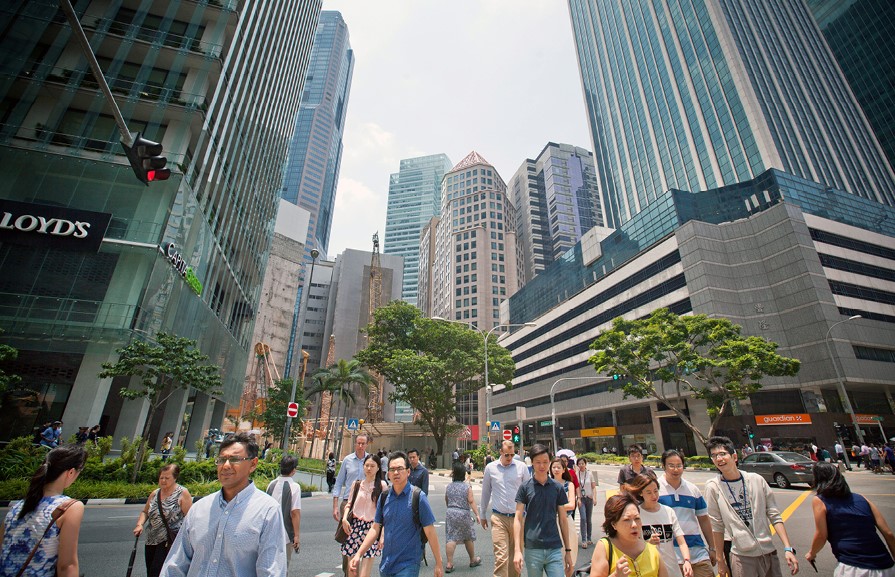 Facing many of the same challenges as other cities around the world – of environmental sustainability and energy use, shifts in the size and structure of its labour force, and financial forces that divorce land values from quotidian economic activity – Singapore has embraced technology and internalised the concept of the ‘smart city’.
The smart city vision, blending data and connectivity to optimise services and infrastructure, has been around in its current form for at least a decade, but with the rapid development of technology in recent years has leapt from corporate brochures into reality.

Those brochures promise efficiency of movement around conurbations that are cleaned and managed to algorithmic perfection. For some urban experts, they invoke a degree of disquiet that the cities optimised by these processes risk being dehumanised; that the taxi drivers and the café staff being freed up for other labour, or replaced entirely, by automation provide rare moments of human interaction in an increasingly atomised society.

As Marcus Foth, the founder of the Urban Informatics Lab at the Queensland University of Technology in Australia, says: “It’s important that we agree that it’s not just about consuming services and being moved from A to B, life in a city is far more complex and rich, and there are so many other facets to life that play out in a city that we need to put into the equation.”

The vector for the spread of the smart cities idea was the technology companies and consultancies who, having saturated the corporate market with their technology solutions, moved onto municipal governments, according to Foth. “They’re in a way selling the same products that they were selling [to companies] in the ’70s to cities, optimising whatever is at hand.”

People who were seen as residents, all of a sudden, they’re seen as consumers, as clients that are consuming services

This, he says, leads to a conveyor-belt approach – “people who were seen as residents, all of a sudden, they’re seen as consumers, as clients that are consuming services, and the local government is the service provider.”
Applying the same data-led approach to managing a company to a city is very problematic, raising serious questions about the agency of citizens, and about the conflict between what an algorithm determines to be the best decision for the aggregate, and how individuals experience that decision.

“There’s a whole bunch of different risks with big data and big data analysis. One is that there seems to be an assumption in so many different stakeholders’ minds that the quantity of data is correlated to the quality of insight. That isn’t true,” he says. “The other one is this notion that big data is objective because it’s so large and it comes from so many different sources.”

That, he says, is also not true – algorithms are built around human-designed models, which themselves are supported by subjective assumptions.

Usman Haque, an architect who works on citizen-centric urbanism through his consultancy Umbrellium, foresees other problems. “When we introduce technical processes that make decisions on our behalf – and I’m thinking here about systems for traffic, as much as about autonomous vehicles – it’s a question that the incentive becomes for people to say ‘I didn’t make the decision, it was the algorithm’,” he says. “Essentially, it’s the abdication of responsibility I’m worried about.”

The basic formulation of what Haque says was that the “first phase” of smart cities lent itself to an opaque, top-down approach that presents simple solutions to complex problems. It is now, he hopes, being replaced by a more pragmatic, human-led approach.

“This idea that technology can iron out all the wrinkles is actually a bit of a worrying one,” he says. “Because in a sense a lot of the issues that we face, whether they’re part of our democratic process, or our social process, or even how we deal with climate change, are so complex, that when you try to reduce them to a simple linear algorithm that gives a simple yes-no answer, it falls down.”