Virgin Holidays is using virtual reality headsets to entice its customers to exotic locations. The holiday brand ran a test last year using VR in 50 of its stores and showcased some of its top destinations. Customers were encouraged to don a Google Cardboard headset and plunge into virtual tours around the globe.

As customer and marketing director Claire Cronin enthuses: “Rather than just seeing gorgeous pictures of unspoilt beaches, VR helps you experience what it would feel like to go round the rollercoaster at Disney World or go down one of the slides and go through the aquarium at the Atlantis. It really brings things to life.”

Some believe VR will transform society, notably shopping, in a similar way to the internet and the smartphone

The trial boosted sales of holidays by 60 per cent year on year for the stores that took part, while the showcased destinations saw a healthy uptake by holidaymakers. Sales of a Mexico trip, which was given the VR treatment, soared by 84 per cent. The company is extending its use of the technology and also plans to send Google Cardboard headsets to customers who have already booked a holiday so they can watch VR content before they go and prepare for the trip. “Nothing beats VR for showcasing a holiday,” says Ms Cronin.

2016 is being promoted as the year when VR will finally explode into the public consciousness. Leading headset manufacturers, such as HTC Vive and Oculus Rift, launch their hardware early in the New Year, and retailers and brands are looking at ways to use the technology to sell their wares. Some believe VR will transform society, notably shopping, in a similar way to the internet and the smartphone.

Harrods has used VR headsets to give customers a virtual “walk through” of £10-million penthouse apartments marketed by its property arm. Car brands have used it to showcase vehicle test drives.

VR headsets also enable people to have a virtual experience of a fashion show or walk around a furniture showroom, from the comfort of their own sofas. At present, the trials are operated inside stores, though this is expected to change as more members of the public get their own headsets and VR marketing enters the living room. 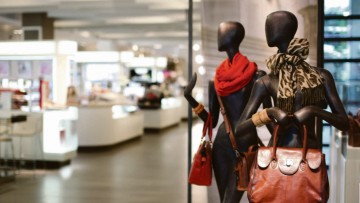 Shopping and immersion platform (SiP), created by Future Visual for John Lewis, on display at the retailer’s trend event

The technology behind VR has recently made some strong improvements which are stirring up interest from retailers. Department store chain John Lewis is teaming up with VR agency Future Visual to create an in-store trial of the new technology next summer. John Lewis innovation manager John Vary explains: “In the past we’ve been quite sceptical about the quality of VR, but we’ve seen a real change.”

The chain is looking at how it can convert a physical catalogue into a walk-through digital experience. “When you look at home spaces in John Lewis with a catalogue, you can’t walk up and look out of the window, you can’t see the table from above, but in VR you start to bring to life these printed spaces in a three-dimensional experience.”

The possible uses of VR for retailers and brands are endless, says J.B. McRee, senior manager of product marketing at HTC Vive. “VR allows brands to engage with users in unique ways that were never possible before,” he says. For instance, a brand could recreate a real-world store in VR and mimic the layout of a traditional retailer allowing the user to move through it trying on goods.

But the virtual store would have a difference as it would be tailored to the personalised tastes of that user. It could enable the virtual shopper to hold up two items of clothing next to each other to compare them. Mr McRee believes there will be huge strides in the way retailers use VR. “It is speculative now,” he says. “But there is no doubt that is the direction it is going to go.”

Will consumers be won over?

However, not everyone is convinced. Scott Ross, chief technology officer at DigitasLBi, says VR is being talked about in excited tones by marketers, retailers and agencies, but he is sceptical that it will mean much to consumers. “Everyone is hoping it will be a significant new experience, but the reality is I’m not seeing these things making a huge impact,” he says. One drawback is that the headset offers an individual experience, while shopping is becoming increasingly social. Developers say this will be solved over time, allowing people to share their VR experiences. 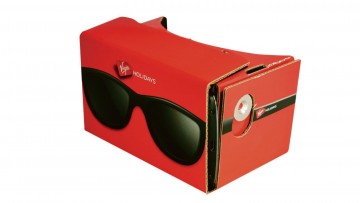 The big challenge will be creating content to power the VR revolution, though this should become easier and cheaper as new 360-degree cameras are launched. Google is testing the Jump VR camera, which would enable the public to create VR videos of their holidays and other experiences. This could become a new form of social-sharing, and a huge influence on the way people recommend brands and experiences.

Retailers are already using VR to visualise new stores and plan how they stock them. Many will be looking to stay ahead of the curve and use the technology to inspire their customers to get spending. But these are early days for VR. The 360-degree experience can only get better.