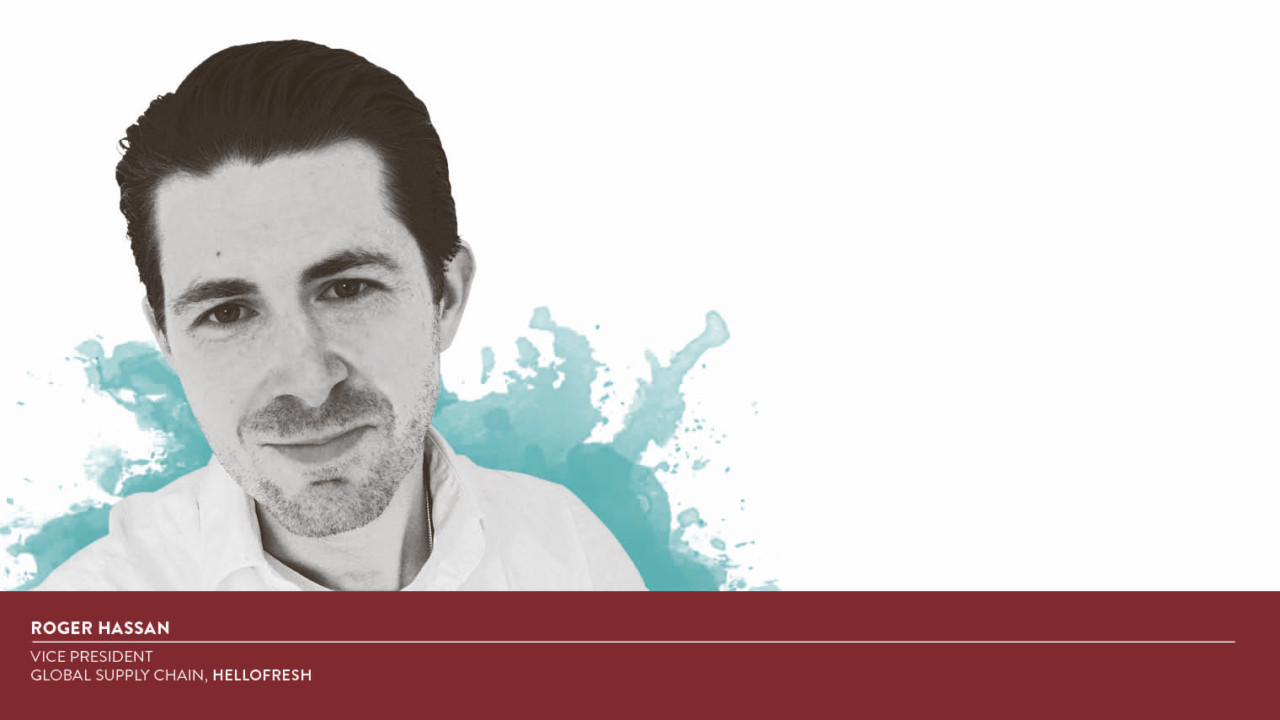 Roger Hassan reels off the factors that make managing a supply chain particularly difficult – high growth, short shelf life, short lead times, high volatility – and immediately it becomes apparent that he has his work cut out. Because he and his employers, the fast-growing food delivery startup HelloFresh, have to deal with them all.

Not that this has hampered the company’s progress. Since it was founded in 2011, the Berlin-based business has been backed by Rocket Internet, the venture builder run by the Samwer brothers, and last year closed a funding round that valued it at €2.6 billion, securing its status as one of Europe’s “unicorns”.

As you would expect, with numbers like that, growth is strong. Half-yearly results published in 2015 showed the number of meals served had mushroomed by 355 per cent to 18.2 million and revenue was up by 408 per cent to €112.5 million, compared with the equivalent six-month period in the previous year. The company says it is on track to record annual revenues of €566 million this year.

Changing the way we shop

Partnerships with high-profile chefs such as Jamie Oliver across the company’s seven markets have helped to boost its profile. But primarily, Mr Hassan, who is vice president of global supply chain, puts the success of HelloFresh down to the fundamental promise the company makes to provide its customers with “the opportunity to enjoy wholesome home-cooked meals with no planning, no shopping and no hassle required”. Something it does through a “soft subscription” model that sees it send boxes of high-quality ingredients accompanied with recipe cards, direct to people’s front doors.

The company’s website says: “Behind the scenes, a huge data-driven technology platform puts us in the prime position for disrupting the food supply chain and for fundamentally changing the way consumers shop for food.” This, for Mr Hassan, was the main draw and the reason he joined the business in 2014 with responsibility for overseeing the global supply chain.

“In my teens I worked at the very bottom level in packing houses,” he says. “That ignited my interest in things that go in behind the scenes and all of the work that has to go on before the point of sale.”

From there he took up posts at Next, Sainsbury’s “in the very early days of their e-commerce solutions, working on their first dark store – with a limited amount of success” and the Hovis division of Premier Foods, “which was a great education – it’s a highly perishable product with short lead times so if you don’t get it right, it goes in the bin”.

There was a stint at an international consulting company based in the Netherlands before he returned home to work at Royal Mail. “This was just around the time that they were focusing on privatisation,” says Mr Hassan. “So the task was to turn some of the most challenging parts of the business from loss making to profitable. The rise of e-commerce and home delivery channels were definitely making their mark but, when I joined, they were still convinced they were a letters business doing a bit of parcels.

“By the end of my two-and-a-half years there, they had become a parcels business doing a bit of letters. That was increasing revenue, but it was also increasing strain on the network that wasn’t designed to carry that product.”

Then, in 2014, Mr Hassan was approached by Thomas Griesel, one of HelloFresh’s two co-founders, who persuaded him to take on a new challenge. “I’d spent a number of years in existing companies trying to re-engineer existing processes,” says Mr Hassan. “With Royal Mail I’d even gone so far as being part of a group of people who had come in to shut down parts of the business, close down sites and rationalise the network. So being given the opportunity to take a blank piece of paper and build something, where you could be opening and creating something, that was a significant draw.”

Now he says the supply chain he has had helped to shape is built on the foundation of the company’s recipes. They are carefully engineered to be nutritious, easy to make at home and, crucially, to suit the tastes of each market. But because of the company’s business model, they must also be made up of elements that can be procured, assembled and shipped at scale. This is where the company’s suppliers play a crucial role.

Mr Hassan explains that the relationships that HelloFresh has with its suppliers differs significantly from the equivalent arrangements between producers and larger, or more traditional, retailers. “If we were an Ocado and making an order for red peppers, for example, we’d order a certain number of kilos or pallets. But when HelloFresh places and order with a supplier, we know exactly how many we need because that’s the number that has already been ordered and paid for by our customers,” he says.
“So if we order 10,000 red peppers, we need 10,000 red peppers – we don’t want 9,999, we don’t need 10,001. That can be very hard for our suppliers to get their heads round.” But for those suppliers that do manage to attune themselves with the HelloFresh business model, the benefits are clear. The company places a provisional order with its suppliers ten weeks ahead of delivery. The actual quantities required may vary by 20 per cent from this initial estimate, but suppliers will be told exactly how much the order is for one week before it’s due.

For small companies who would either have to guesstimate the rate of their growth or heavily discount their wares in order to get a foothold with large, powerful retailers, the benefits are clear. “We’re working more on a partnership basis, rather than a transactional one,” says Mr Hassan. “That allows us to work in a much more collaborative way – and it’s the only way we can stay flexible and meet the demands of our consumers.”

The next stage in the process is production, which Mr Hassan says has more in common with an automotive assembly line than the type of “picking” process generally employed by the online arm of supermarkets. Ingredients are packed into boxes and prepared for delivery – the final stage in the supply chain.

In the Netherlands, a dense population and a relatively small area combine to mean the company is able to complete its orders with its own fleet of vehicles. However, in a larger and more sparsely populated market, like some parts of the United States, HelloFresh calls on delivery companies such as UPS to help with shipping.

We’re always looking for solutions that are as flexible as possible that don’t require huge amounts of fixed infrastructure, inflated costs or overheads

Mr Hassan says that the relative simplicity of the HelloFresh supply chain, which basically includes three steps – growing, production and delivery – gives the company a huge advantage over supermarkets that might take eight to ten days and incur a significant amount of wastage in getting its products from farm to fork. But that doesn’t mean the company is about to rest on its laurels.

Up until now, one of the strengths of HelloFresh has been the discovery element of the customer experience. “People get stuck in a rut,” he says. “The statistics are something like the average UK household has access to 6,500 recipes, but recycles the same 11 week on week. Part of what our consumers like is that they don’t have to think about it. But that’s not great for every consumer.”

As a result, the business is taking steps to build a greater degree of customisation into its platform, allowing those who enjoy the lucky-dip approach to continue doing so, but also offering the chance to set a “taste profile” or avoid certain ingredients altogether.

Of course, this means the way the supply chain works has to change. “Every decision we make in supply chain has to be with an eye on the future. We’re always looking for solutions that are as flexible as possible that don’t require huge amounts of fixed infrastructure, inflated costs or overheads, so we can modify and adapt alongside the innovation of the product,” says Mr Hassan.
Looking to the future, he doesn’t identify any “bonkers or unusual game-changers” that will transform the HelloFresh supply chain. However, he does single out delivery and the way companies such as Deliveroo and Instacart are refining the “last mile” part of the supply chain.

“There’s a lot of interesting innovation,” he says. “People used to just think of supply chain logistics as a burden on an organisation – a necessary evil. But we don’t think about it like that. If you do it well, you can add to the customer experience and do something other people aren’t – that gives you an advantage.”

The parcel delivery company was thrown into chaos in 2014 when higher than anticipated order volumes caused by Black Friday overwhelmed its warehouses. The backlog meant Yodel had to suspend the pick-up of new orders from its clients and consumers’ deliveries were delayed by up to three days in the lead up to Christmas.

A pink Barbie-branded toy car for toddlers caused a pile-up in Target’s supply chain when the American retailer embarked on its first international expansion in 2013. Mismatched barcodes were among the failings that led to the car and other products causing warehouse backlogs which left empty shelves in many of Target’s 124 Canadian stores.

By changing the assembly process and the supply chain at the same time, Boeing hoped it could reduce development time of its 787 Dreamliner from four to six years and knock down costs from $10 billion to $6 billion. However, the move delayed the project by three years – it eventually came to market in 2011 – and resulted in billions of dollars in extra costs.

Concerns arose in September 1999 when it emerged that new order-taking and distribution systems would prevent the candy maker from delivering on orders worth $100 million during one of its key times of the year. This preceded a 25 per cent decline in the company’s share price over the course of just a few months.

A new, highly automated, baggage handling system was beset with errors as underground tunnels that would house the conveyors were built before the main contractor had been appointed. Tracks were jammed, baggage delivered to the wrong destination or damaged in transit. A public relations fiasco followed and the system was completely closed down in 2005.