Perceptions of beauty vary from culture to culture. In Japan, for example, small breasts are most attractive, while in Venezuela, where the desired aesthetic is to be more buxom, a woman with “A” cups would be hot-footing it to the nearest breast augmentation surgeon.

And our views change from generation to generation. These days, Rubens’ Venus at a Mirror would undoubtedly be considered unattractively overweight, whereas the 17th-century take on today’s androgynous, waif-like models would have been unfavourable.

Many factors fashion these perceptions, but in 2015 there can be no doubting the impact that social media and celebrity culture have when forming our ideals of what is beautiful. This, in turn, influences trends in cosmetic procedures.

“With social networks, such as Instagram and Facebook, and advances in smartphone technology, people are taking more and more pictures of themselves than ever before,” says London-based cosmetic surgeon Julian De Silva. “These images are then shared on social media and commented upon, so it’s not surprising they should become drivers for surgery.”

But it’s not just the sheer number of pictures that are being taken that cause people to notice more and more details of their face, it’s also that technology is quite literally changing the way we see ourselves.

“The angles at which images are taken and the high-definition nature of the cameras being used can magnify any imperfections – the nose and the jawline become particularly apparent in selfies,” says Dr De Silva. “I probably have at least one patient every couple of weeks coming to me because a selfie hasn’t shown them in a flattering light.”

This increased focus on the jawline in particular is something that Sarah Tonks, who specialises in non-surgical aesthetic treatments at her Knightsbridge clinic, has also seen.

“In the aesthetic industry, we’ve known for some time that it’s sagging, especially along the jawline, that makes people look older, not lines and wrinkles, and it seems consumers are now starting to realise that,” says Dr Tonks. 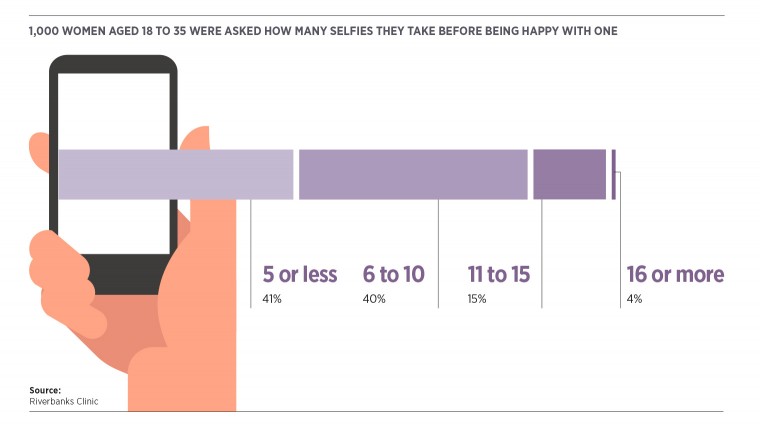 That’s partly because the sort of images we see when taking selfies, where we look up, or when on Skype or FaceTime, when we are often looking down, are in stark contrast to the straight-on image we normally see in the mirror. Looking up tightens the jawline, while looking down makes it appear slacker.

As a result Dr De Silva and Dr Tonks have both seen an upsurge in demand for procedures that address the jaw and the chin.

“Chin implants have definitely increased in popularity. I probably do one or two a week,” says Dr De Silva. “Three years ago, the American Society of Plastic Surgeons reported they were the fastest growing type of cosmetic procedure in the US and, as their trends tend to filter over here, it’s not surprising we’re seeing a similar pattern.

“They’re a very good way of creating harmony in the face as, if you have a small chin, it can make a large nose look larger. A chin implant can make the nose look smaller without rhinoplasty because it just makes the face look more balanced.”

Meanwhile, Dr Tonks uses filler at the back of the jaw and in the chin to help pull up sagging skin around the jawline, and often uses fillers in conjunction with a thread lift, a procedure in which a thread made from polylactic acid that dissolves after 18 months is passed into the skin to help lift it.

“Even though the combination of a thread lift and fillers won’t do what a facelift will, you can still get about 1cm-worth of elevation which, when you’re frequently talking just millimetres with volume replacement, is quite significant,” she says.

Increasingly, some surgeons are capitalising on new technology to improve their understanding of their patient’s needs and expectations.

The Riverbanks Clinic in Harpenden, Hertfordshire, asked 1,000 women aged 18 to 35 about their attitudes to cosmetic surgery and the average number of selfies they took before feeling happy to share the images with others or post them on social media. The more pictures they took, the more likely they were to be considering surgery. The clinic’s medical director Ravi Jain has used this research to inform his consultation process.

“This test helps us further understand the needs of our patients,” says Dr Jain. “Knowing what your patient wants to change, is unhappy about and what their expectations are is incredibly important, so the ‘selfie test’ is an invaluable tool in a 21st-century consultation.”

As Department of Health data shows, social media has familiarised an entire generation with the concept of cosmetic surgery and that’s something of which Dr De Silva has first-hand experience.

“One of my patients was telling me she had been posting selfies on Instagram a week after rhinoplasty, and that there were three or four women around the world who had undergone the procedure at the same time and were comparing their progress post-surgery,” he says.

And, of course, while consumers very publicly documenting all stages of their cosmetic interventions works to normalise the issue, when celebrities who have admitted undergoing certain procedures are pictured, this can only fuel interest further.

Surgeons agree that while women are unlikely to ask for Victoria Beckham’s breasts or Kylie Minogue’s bottom, non-surgical procedures, which require less financial and emotional investment, with less down-time, can be driven by high-profile women, whether they’re appearing on social networks or in more traditional forms of media.

“Kylie Jenner’s pictures on Instagram and her subsequent admission that she’d had her lips enhanced certainly led to an uptick in interest in volume in the lips,’ says Dr Tonks. “And when Gillian Taylforth was interviewed about her thread lift, patients coming in would mention her.”

But in a world where it’s no longer just celebrities who are being constantly photographed, it seems the biggest driver, when it comes to procedures, is ourselves. Notably, there has been an increase in less invasive procedures towards creating flawless, even skin – exactly the sort of complexion you want to be aiming for when you’re never more than a metre away from a camera.

Figures from WhatClinic.com show, in the past six months alone, a 55 per cent increase in inquiries about non-surgical cosmetic treatments, such as dermal fillers, peels, thread-vein removal and dermaroller facials. Increasingly, it seems, we’re all ready for our close-up.