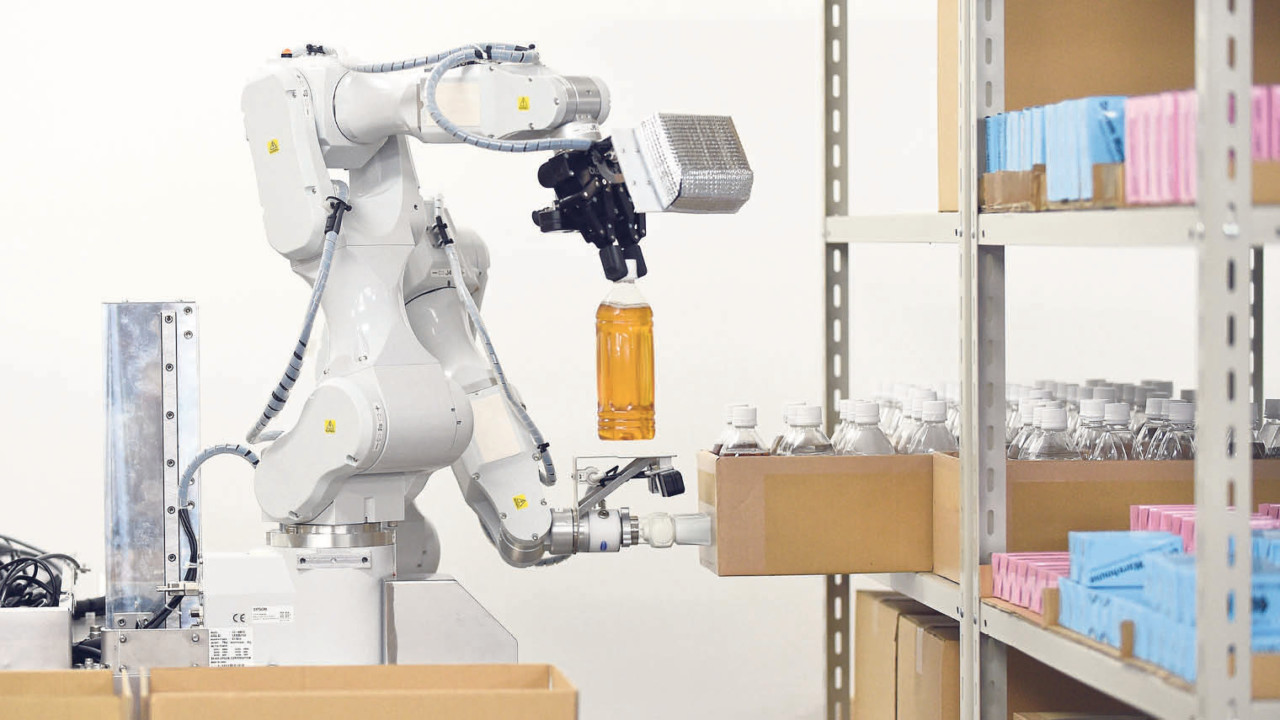 In the 1984 film Terminator, Arnold Schwarzenegger’s eponymous robot was a poor shopper, requesting items not yet invented and getting combative with the staff.

In 2016 robots are more tailored to picking through the apples at a supermarket for a customer’s weekly shop. However, rather than pottering about the high street, they are found in out-of-town warehouses. On an industrial scale they are transforming the way people buy groceries, which is at the cutting edge of warehouse automation.

“We deliver to our customers in one-hour slots with 95 per cent on-time accuracy and 99 per cent order accuracy,” says Paul Clarke, head of technology at online retailer Ocado. “Our whole business is clocked to the beat of that one-hour delivery drum, all the way back to the goods being delivered by our suppliers.”

In the 2016 annual report for the material handling industry (MHI), published by consultancy Deloitte and trade association MHI, robotics and automation were cited by most respondents (51 per cent) to research as a technology that can be a source of either disruption or competitive advantage.

The shift to online purchasing for goods of every sort has transformed the operational demands placed upon warehouses. Smaller, more frequent orders are being placed requiring a high level of efficiency and little room for error.

“It leads firms to intensify in the locations they have,” says Alan Holland, director for Greater London at property investment and development company Segro. “They are often carrying fast-moving, high-value goods. The challenge is how to intensify to get more productivity from the square footage or more multiple usages from the same location. It throws up some interesting options as to how firms can intensify.”

There is some disparity in the capability firms have in automating to intensify. A few big names are leading the field, but many firms are unable to keep pace. In the Deloitte/MHI report, 74 per cent of firms reported that they did not expect to have robotics and automation introduced into their supply chain for six or more years.

“Amazon has created a marketplace where people buy things online and expect it the next day without paying for that service,” says Eric Carter, solutions architect at Indigo Software, a warehouse management software provider. “Lots of the small and medium-sized enterprises in this space frankly have processes in the warehouse that look like anarchy masquerading as flexibility.”

Those firms able to leverage efficiency are using it as a competitive differentiator. The need for speed saw retailer Argos launch a same-day delivery service in October 2015. Amazon, which bought warehouse robotics firm Kiva Systems in 2012 for $775 million to acquire its small and speedy robot inventory, also expanded its service offering in October 2015 to include fresh food deliveries to areas of London.

Richard Kirker, solution manager at software giant SAP, says: “As volumes and fulfilment promises go up, the need for accuracy and efficiency increases, which requires some degree of system support in varying degrees of automation.”

Amazon’s acquisition of Kiva, which developed autonomous mobile warehouse shelves that could be transported in their entirety, highlights the importance that technology plays in establishing a unique differentiation.

In August 2014, stock analyst James Tracey of broker Redburn downgraded the stock of Ocado from buy to sell, noting he had only identified a single patent that it owned, with much of its technology provided by third parties. He suggested its warehouse capabilities could, therefore, be replicated by other firms and the firm’s share price subsequently fell.

Ocado reported it had 14 patents pending at the time and the firm was gearing up to revolutionise its warehouse technology in 2015. By the time it announced its annual results in February 2016, it had filed 73 patent applications.

By having a lot of robots running around at high speed, you can have the goods delivered to individual warehouse operators

“As a disruptor in the retail sector, there was no template for building our first automated warehouse back in 2002,” says Ocado’s Mr Clarke. “Our business is all about making the process of shopping for groceries online as simple and convenient as possible for our customers.

“But that simplicity belies the truth about the level of complexity, data, algorithms, machine-learning and software that lie below the surface of the huge technology iceberg that powers our business. Almost all this Aladdin’s cave of technology and software is built in-house by our own engineers.”

The firm originally wrote all its software in-house, but bought hardware from materials handling equipment suppliers that had to be adapted to suit the purpose of grocery fulfilment, which is typically more demanding than other warehousing requirements. It then upgraded those systems as specialist technology became available and ultimately designed the technology itself.

It worked with product design and development firm Cambridge Consultants to develop a 4G wireless platform that could control 1,000 robots working within 50 metres of a base station.
“The concept was to create a system which had stacks of crates, one on top of the other, put within a metal grid structure and with a swarm of robots moving around on the upper surface of that grid to go and fetch items,” says Tim Ensor, head of connected devices at Cambridge Consultants. “By having a lot of robots running around at high speed, you can have the goods delivered to individual warehouse operators.”

It is not only the hardware that firms are getting smarter at. By automating the management process and identification of problems, firms can begin to apply the operators to tackle issues that are beyond machines so automation is applied most effectively.

“We believe there is great benefit in automating the exceptions management process,” says Indigo Software’s Mr Carter. “We see 2,000 orders picked on a daily basis in numerous sites of our network and half a dozen of those will have a problem. There might be a stock issue, an individual picker issue or a break in the process where the front office point-of-sale system and the back-office system have been allowed to get out of step for whatever reason.”

With orders accepted via every channel, from voice to online portals, and across wholesale and retail businesses, and with suppliers providing the other side of the business with data along the same basis, the systems needed to control the automated process must be incredibly robust.

Shane Finlay, head of digital for retail in the UK and Ireland at SAP, says: “With the latest technology innovations retailers can see goods across all touchpoints and assemble orders from multiple locations. For instance, Walmart tracks goods in transit, across multiple time zones, during peak trading events like Black Friday, in order to monitor demand and reroute goods accordingly. This is something Amazon and eBay have been doing for years, but has been adopted by bricks-and-mortar businesses.”

The cost of investing in technology, particularly as some firms see a widening gap between their own capabilities and those that have already invested in digital automation, means there is likely to be consolidation of one sort or another. While competition will prevent partnerships between some players – and most firms have pushed beyond their initial product range – the requirement for a business model that scales, but duplicates costs, will mean utility models of warehousing and delivery are likely to be considered.

Mr Carter cites a number of providers in London that supply hotels and restaurants in the centre of the capital with very high-end products, and are consolidating their delivery through third parties.

He says: “There is an opportunity for not just one player in the market, but multiple players to invest in a completely new way of managing their supply chain.” This has already begun to take root in some areas of business. Ocado began providing facilities for supermarket Morrisons in 2014 and this model is expected to deliver further growth for the firm, offering diversity in revenue stream by tapping into a different market share. Mr Clarke argues that his firm’s two existing grocery fulfilment centres are the largest and most evolved of their kind in the world.

“We are now developing the Ocado Smart Platform to provide large bricks-and-mortar grocery retailers around the world with a shortcut to moving online, just as we did for Morrisons in 2014,” he says. “This has required us to develop our own highly modular and scalable hardware platform for building these automated facilities. So now we are leading the evolution of the all the technology, software and hardware, ourselves.”

The ubiquity of mobile handsets creates a range control and data options for warehouse operators, which would have required specialist hardware several years ago. In addition the capacity to control hardware has been drastically improved within the warehouse.

Mechanising the movement of items offers a considerable reduction in error rate and cost. This encompasses not only land-based vehicles but drones, which Amazon in particular has been championing as the delivery mechanisms of the future.

With more flexible and mobile picking and sorting mechanisms, warehouses can reduce the level of manual intervention needed. Designing the movement paths for picking items efficiently can cut the time taken on each order by seconds, creating a highly scalable infrastructure.

04 The internet of things

Putting more devices online gives greater potential for automation and management. Their interconnectivity means that tracking where, what and how a piece of equipment or a package is doing can create a more valuable picture of a firm’s operations and efficiency.

From the Tesco Club Card to Amazon’s targeted recommendations, the retail space has long dominated the crunching of customer data to improve sales and customer service levels. When combined with warehouse automation, firms can further improve service.