With a number of challenges facing insurers in the current market environment, what can be done to ensure they continue to deliver returns in all conditions?

“In this low-yield and volatile environment, it’s particularly important that we understand the risks we are taking – how the assets backing our customers’ long-term expectations might be impacted when markets move – and ensure we have real diversification across geographies, sectors and industries, as well as the more traditional view of diversification across asset classes,” says Rachel Elwell, ‎investment office and staff pensions director at insurer Royal London.

“Good housekeeping: a focus on costs, hard work with our asset managers to identify and then make the most of opportunities, and strong governance to allow good decision-making are also key.”

However, the difficulties faced in growing portfolios and delivering returns has been a key concern for insurers for some time.

“Investing in the current environment is a bit like eating in a restaurant where the only items on the menu are rotting fish and mouldy cabbage – you eat it because you have to,” says Doug Jones, chief executive of Charles Taylor Investment Management.

“Low returns on assets mean insurers have to focus more on their underwriting. They cannot rely on their investments to make the books balance. But low returns also mean a reach for yield in new strategies.

“Some of these strategies may mean taking new risks, such as crossing over from traditional fixed income into hard-currency emerging market debt, high-yield and income-oriented equities.”

Richard Clarke, head of UK asset management at consultancy KPMG, adds: “For some time, firms have been expanding their investment options, initially into things like debt backed by real assets, but now we’re increasingly seeing firms invest in long-term infrastructure and potentially riskier real assets such as early-development-phase property.

In search of returns, insurers have increasingly turned to other asset classes and illiquid assets, and brought investment activities in line with underwriting practices developed and regulated under the European Union Solvency II Directive.

“Fixed income remains insurers’ best friend, but they no longer want to shake the hand of some OECD [Organisation for Economic Co-operation and Development] governments,” says Colin Fitzgerald, head of EMEA (Europe, Middle East and Africa) institutional at Invesco. “The big story within fixed income is the shunning of global government debt and the search for alternatives within core fixed income.

“Instead, we see a lot of interest from insurers for multi-asset investment strategies. Insurers realise they stand to benefit from greater balance-sheet stability and enhanced returns over the long term, together with the potential for lower volatility and capital requirements.”

“Historically, the cost of running either internal or external asset management functions has been small, typically less than 5 per cent of investment returns,” he says. “As investment returns have declined, this proportion has increased significantly, in some cases eradicating the investment return entirely.”

Mr Büsst says there have been a number of regulatory hurdles for insurers operating an asset management function or business, not only facing Solvency II, but a number of other European directives governing trading securities and investing.

“To date insurers appear to have responded by aiming to increase investment returns, rather than cut costs,” he says.

However, the move towards new asset classes has also increased the level of expertise among insurers’ own investment teams rather than seeking third-party managers.

“The increase in use of new asset classes and strategies has yet to result in a significant move towards more outsourcing; the main driver for any increase has been the need to access new investment expertise and not to cut costs,” says Mr Büsst.

The aftermath of this summer’s vote on the UK’s continued membership of the EU saw heightened volatility as investors around the world struggled to respond to the result.

Scott Eason, head of insurance consulting at London-based consultancy Barnett Waddingham, says insurers were unlikely to have been severely affected by any fall in currency following the Brexit vote.

“Typically insurers will look at investment risks and classify them as rewarded or unrewarded,” he says. “Things like interest rate risk and currency risk are generally perceived by insurers as unrewarded risks: risks that if they invest in or take a position in they will necessarily win. A majority of insurers will have currency-hedged their assets anyway; you generally won’t find that they have exposure to sterling having fallen.

“What it does do is potentially make it more attractive to invest in sterling bonds or dollar bonds hedged back to sterling, but it hasn’t been a major issue.”

Indeed, many insurers will have been aware of the potential issues surrounding Brexit before the referendum campaign started.

“In terms of Brexit-driven volatility, insurers were well aware that the vote itself could influence bond yields, the price of assets such as equities and foreign exchange, and some have sought to actively manage their exposure ahead of the vote,” says William Gibbons, director in PwC’s insurance practice.

“Now the vote has taken place, insurers are considering the implications of Brexit and also quantitative easing for investment markets going forwards, and whether to adjust their investment exposures in light of this.”

Others in the industry have considered whether UK voters’ rejection of the EU trading bloc could signal the scrapping of ineffective and political red tape holding back insurers from accessing some investment products and strategies.

The current market environment also poses challenges for insurers with their own in-house offerings, particularly since the introduction of pension freedoms with investors now able to take greater control over who manages their retirement savings.

“Successive waves of pension reform have eroded the advantages that insurance funds once had in pensions,” says Ed Jervis, insurance partner at consultancy EY. “Insurers are recognising they have to take the pure-play asset managers on at their own game with capital and fee-light investment propositions that offer good performance potential across a range of risk profiles and time horizons.” 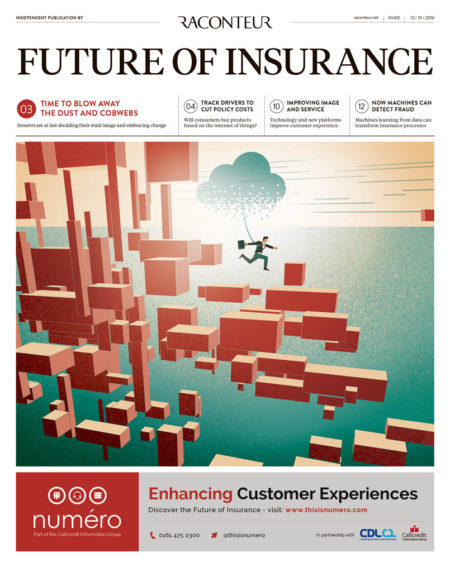 The insurance industry gets with the times

Could tracking drivers cut the cost of insurance policies?

Innovation for the customer’s good

Also in Future of Insurance