It’s a fair bet that none of the thousands of owners of the Trunki has ever heard of Lord Justice Neuberger or the UK Supreme Court.

The suitcase is designed for children or as the manufacturer – a Dragons’ Den reject – describes them “globe-trotting tots”. Indeed, the Trunki’s core customer base presumably have better things on their minds than the cogitations of five judges who, to them, must seem to have the combined age of about three million.

But last March, Lord Neuberger and his band of four other Supreme Court justices handed down a ruling that certainly pricked the ears of intellectual property lawyers.

Trunki’s British designer Magmatic lost its battle to protect the product’s design from imitation by Hong Kong businesss PMS and its Kiddee Case range. Intellectual property (IP) lawyers and other experts immediately predicted that the ruling would be “disastrous” for those aiming to protect designs through the European Union’s registration process.

The case (no pun intended) highlights the importance for all businesses, especially cutting-edge startups, to construct a comprehensive and considered IP strategy. Entreprenuers and executives who take the view that IP is one of those dull subjects best left to the pasty-faced legal team will be playing fast and loose with possible catastrophe.

In a globalised economy, ideas are money and protecting them is vital. And the IP landscape is constantly evolving.

Dealing with the impact of the internet on infringement of IP rights continues to be a primary focus of businesses and their laywers. Nick Aries, a partner at Bird & Bird, a London-based international law firm, describes the terrane. “The internet has created an easier and quicker route to market for counterfeit goods, the ability to copy and share music and films on a huge scale, and facilitates illegal streaming of TV footage including high-value sports matches,” he says.

“Courts all over the world are having to set appropriate boundaries for measures responding to this, such as the proper scope of website-blocking injunctions ordered against internet service providers.” 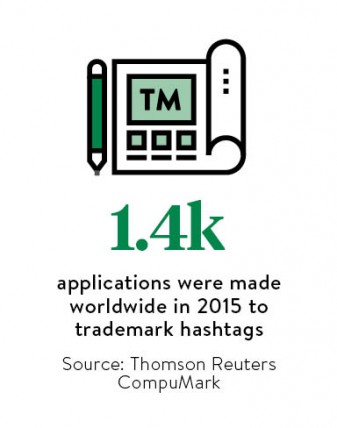 A rundown of issues cropping up in just the last few months demonstrates how fast moving the sector has become. For example, recent research showed that attempts to trademark Twitter hashtags – a device and phenomenon that didn’t even exist a decade ago – have rocketed.

Some 1,400 applications were made worldwide last year as companies bid to protect brand identities on social media. Examples of the most prominent successful attempts by corporations to protect hashtags include #likeagirl, which the multinational Procter & Gamble has trademarked for its line of Always female sanitary products, and Salesforce, the US cloud-computing business, which has trademarked #dreamjob.

Elsewhere, Pele, still the world’s most famous former footballer, has effectively become a brand that he strives to protect, with the Brazilian currently suing Samsung over use of a lookalike in an advert.

But he’s not the only one. Pop star Rihanna recently launched a claim against high street clothing chain Topshop over the use of her photograph on a T-shirt. Both cases shine a light on the efforts of celebrities’ lawyers to invoke laws around the IP concept of “passing off” to protect their clients from incidents of false advertising endorsements.

Looking ahead into the near future, a change in UK copyright law will herald greater protection for industrially produced designs, including iconic furniture. But that is arguably not such a welcome development for consumers, who have grown used to buying cheaper retro replications of classic designs.

Lawyers forecast that the reform will afford designers protection over their creations at least 70 years after their death instead of the current 25 years. And that means that several manufacturers will have to stop making replicas of iconic historical designs, such as the anglepoise lamp.

On the broader horizon, the European Commission’s digital single market strategy will be an important issue in the inboxes of business leaders and their lawyers. Many proposals for reform are being considered, potentially affecting the “liability of service providers for unlawful content, which they store or transmit”, Mr Aries predicts.

The eurocrats are aiming to harmonise mechanisms for rights holders to take down unlawful content online, as well as the ability of European consumers to watch their home country’s online TV services, for example via Netflix, when travelling abroad.

While the Trunki dispute went all the way up the conventional route to the highest court in the UK, specialist lawyers increasingly suggest that IP cases are ripe for the alternative dispute resolution route of arbitration.

Arbitration is also seen as preferable by some lawyers because, with some notable exceptions, there are comparatively few specialist judges on the High Court bench. “With arbitration you get to choose your arbitrator and that can be very important when dealing with a dispute involving highly technical matters,” says Mr Flint.

Perhaps the next Trunki-style dispute will be argued and decided behind closed doors and in secret. 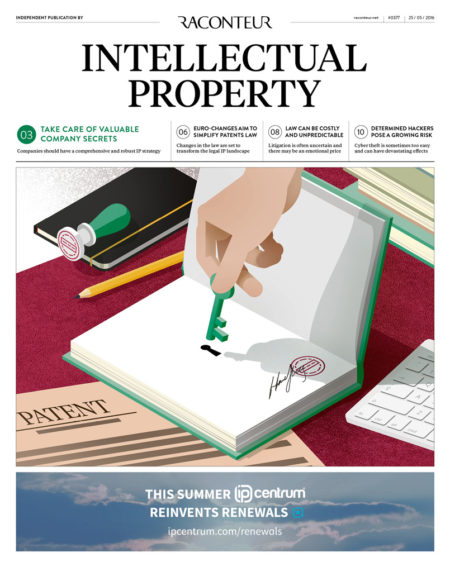