Cars of the future are just around the corner. In the last Budget, chancellor Philip Hammond announced that fully driverless cars, with no one behind the wheel, could be on UK roads as early as 2021. The government also forecast that the industry will bring in 27,000 jobs and be worth £28 billion to the UK economy.

The biggest appeal of driverless cars is undoubtedly safety. A 2008 survey by the US National Highway Traffic Safety Administration found that 93 per cent of crashes were caused by human error. The automated vehicle revolution is signalled to improve road safety drastically for all users.

One bump in the road to this future, however, is insurance. What will car insurance look like in a world where accidents have been greatly reduced? 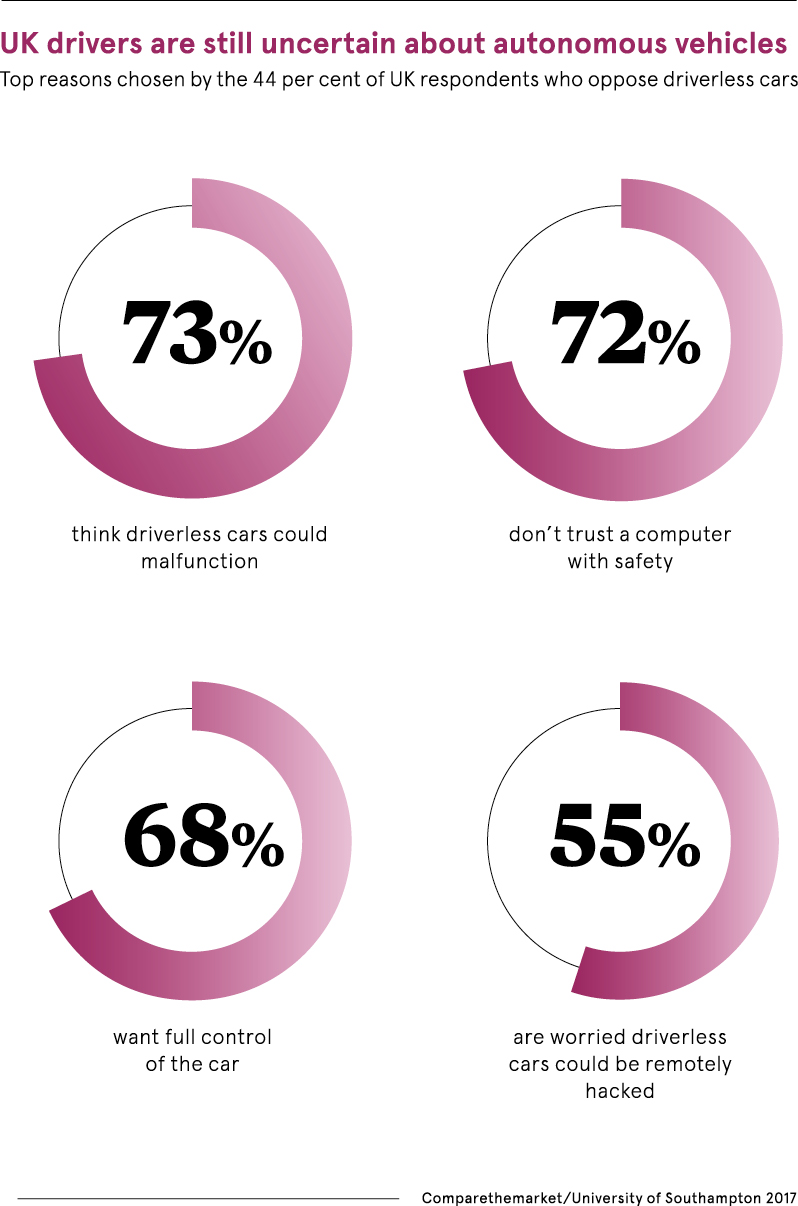 “The insurance industry fully supports the development of automated vehicles,” says Rob Cummings, head of motor and liability at the Association of British Insurers (ABI). “This technology has the potential to dramatically improve road safety, revolutionise our transport systems and make it easier for people who cannot drive to get around.” 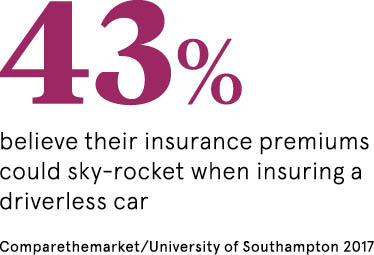 As the insurance industry gears up for the automated vehicle revolution, it’s not the distant future when all cars are driverless that’s the main concern, rather the transition phase. According to estimates by Thatcham Research, a motoring body funded by the insurance industry, it will take at least 25 years before the majority of cars on our roads will be fully autonomous and in the interim there will be a mixed fleet.

“Even when autonomous vehicles are mainstream, the actual penetration into the market is likely to take 15 years,” says Simon Walker, group chief executive of the motor insurance provider First Central Group. “This will result in a continual, though diminishing, pool of non-autonomous vehicles continuing to carry the full risks of the current fleet of vehicles in the UK.”

The government has already stepped in with a solution to plug this gap, with the introduction of the Automated and Electric Vehicles Bill. Existing law requires that all vehicle owners using public roads are required to a hold a valid insurance policy to cover any liability which the owner incurs in an accident. The new Bill, introduced in October, proposes to extend compulsory motor insurance to include the use of autonomous vehicles.

When the legislation was introduced, transport secretary Chris Grayling said: “We are creating a new compulsory insurance framework that covers the use of automated vehicles and when the driver has legitimately handed control to the vehicle. This will ensure that victims have quick and easy access to compensation.”

The move was welcomed by the ABI, which would like to see insurance kept “as straightforward as possible”, Mr Cummings says. In response to the Bill, Thatcham Research set out a ten-point list of criteria to assess whether a vehicle is autonomous or not. “It is crucial that there is a clear definition of exactly what constitutes an automated vehicle,” says Matthew Avery, director of research. “Regulators and insurers require this to classify and insure vehicles appropriately, while consumers need to understand the functionality and capability of the vehicle, and their own responsibilities.”

Experts agree that insurance will still be needed for automated vehicles. “Insurance will still be required, but it is likely to change fundamentally, both in terms of the way premiums are set and in the way in which liability is established,” says Mr Walker. “In relation to premiums, rates will be weighted more to the risk profile of the vehicle than the risk profile of the driver, which is the reverse of what we see today.”

According to Stuart Rye, director of business development at Fujitsu, it will be personalised services that set insurance companies apart from their competitors in this evolving market. “Technologies such as artificial intelligence and automation could enable insurers to offer a more tailored product and smarter targeting when it comes to customer interaction,” he says. “What we’re already seeing is an attempt to integrate new technologies across three key areas of customer experience, better assessments and adding value by mitigating risk.”

This is happening in the insurance industry through the use of telematics. Often known as black-box car insurance, some insurance providers offer customers the option to install a device in their vehicles which monitors their driving. Premiums are then based on the driver’s personal safety record, making this an attractive option for younger drivers, who may otherwise face steep premiums.

“While driverless cars are often the focus of many discussions surrounding the future of insurance, current technologies such as telematics have the potential to make huge differences in the industry,” says Adam Gooch, commercial director at Insure Telematics Solutions, a telematics company that uses artificial intelligence and machine-learning to develop black-box software.

Advanced telematics will enable insurers to build sophisticated risk profiles that take on board driver data such as location, acceleration, cornering and braking to determine the individual driver’s risk. Using these models, insurers will be able to make real-time risk judgments in specific locations. Mr Gooch concludes: “This could open the door to a new generation of insurance products, including on-demand services that could minimise risk

In March, 49-year-old Elaine Herzberg was killed in a road accident involving a driverless car, while she was crossing a six-lane highway in Arizona. It was the first reported death involving an autonomous vehicle and a pedestrian in the United States. The investigation into what happened is ongoing, but in response Uber suspended further testing of its driverless fleet.

The death drew more attention to the hotly debated topic of self-driving cars. Industry experts, however, do not think the development of automated vehicles will come to a halt.

“The competition both between manufacturers and between countries to be first will only serve to make it likely that this incident prompts a pause as opposed to a cessation of efforts,” says Simon Walker, group chief executive of the motor insurance provider First Central Group.

With more than 30,000 people killed on America’s roads each year, proponents of automated vehicles maintain that cars driven by computers rather than people will be safer in the long run. Currently, over 90 per cent of accidents are due to human error. Mr Walker says: “Despite not knowing with clarity exactly when society will feel prepared to allow such technology on public roads, the insurance industry should continue to prepare for that future.”

How hyper-personalisation can transform insurance

Are autonomous ships the future?