How many times have we heard the word “unprecedented” in relation to the coronavirus pandemic over the past few weeks?

One word that has not been quite as overused is reputation. However, plenty of brands and businesses stand to cement or lose theirs depending on their response to this crisis. And some have already been found wanting, making headlines for the wrong reasons.

Companies are coming under increased scrutiny, whether it is for what they do or do not say. Brand reputation may be hard to measure, but it becomes a valuable asset during times of crisis especially.

Neil Stanhope, founder of brand agency Underscore, says: “Brand reputation is not just how your company is perceived by your existing customers, but by the market as a whole. In times of crisis, people quickly turn to what they know and trust or they work on market authority and word of mouth.

“A favourable brand reputation means people not only trust your company, but they are comfortable spending what little they have with you.” Every decision your company takes in the COVID-19 outbreak will be examined more closely than ever before, says Louise Ahuja, director of LouiseBcomms.

Brand marketing in a crisis: Why now is not the time for silence, published in March by Opinium, shows the more vocal brands are perceived as having responded better to the crisis.

It is no surprise that supermarkets came out on top for having been vocal and responding well, followed by the healthcare, pharma, and food and drink sectors. Meanwhile, Opinium’s research shows the top five sectors consumers think have not done anything in response to the crisis are automotive (27 per cent), fashion and beauty (26 per cent), gym and fitness (17 per cent), financial services (15 per cent) and charities (14 per cent).

“Now is the not the time for silence,” says Ahuja. “Even companies that have been forced to close need to find ways to communicate with their audiences to stay relevant and help their customers.”

Paul Beadle, associate director and head of social media and digital communications at MRM, a financial comms and public relations consultancy, says during a crisis companies should want their brand reputation to communicate trust and responsibility.

“If you’re a brand like Ryanair, which doesn’t come across as being very customer focused, then it comes as no surprise when the airline starts dragging its feet over refunds for passengers. That just compounds a poor reputation,” he says. 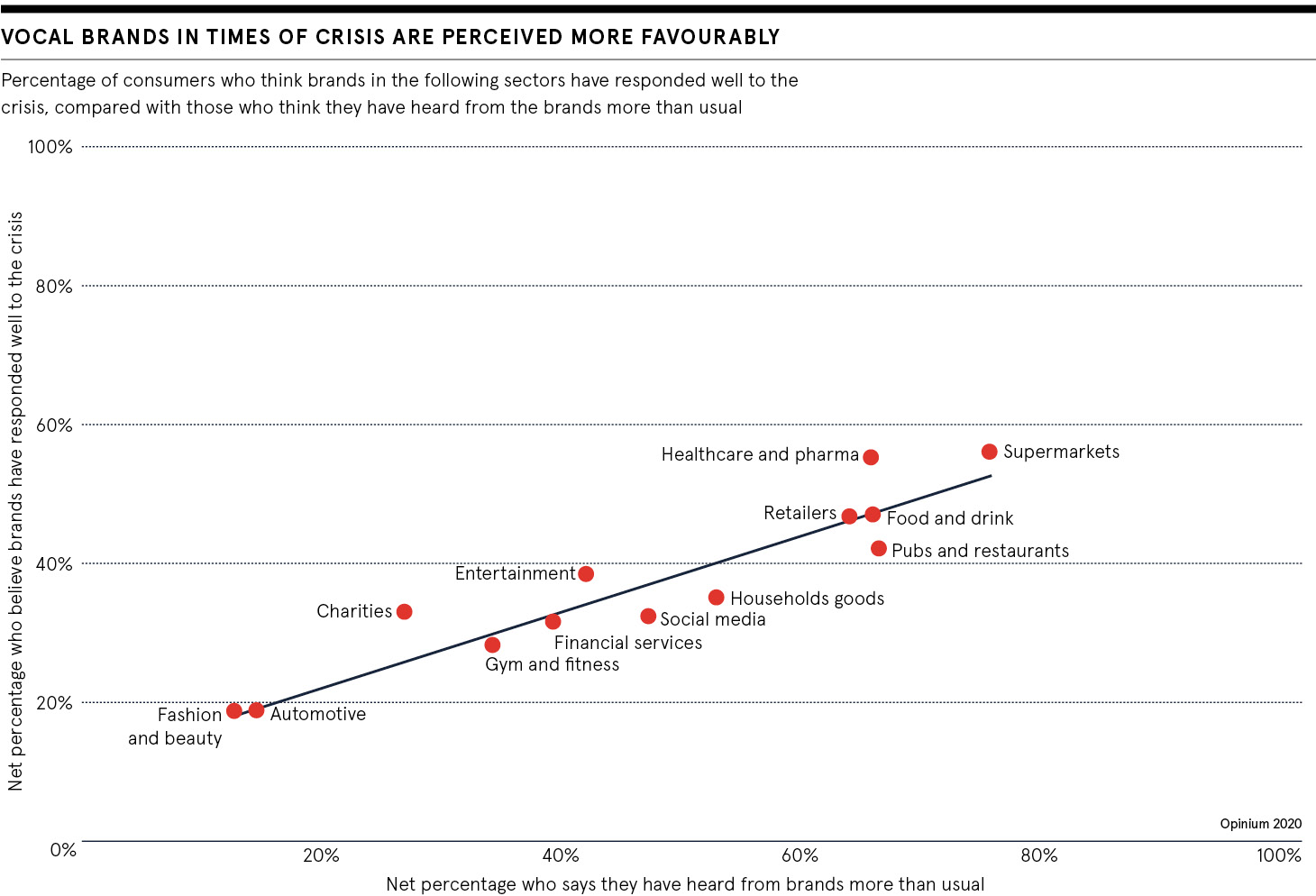 How have the supermarkets managed to find this balance? “The quality I’m seeing from good brands, like the supermarkets, is the sense that ‘we are all in this together’,” says Beadle. “Shoppers will be tolerant if there are queues or shortages in stores, so long as companies explain why and show the extra mile they and their employees are going during difficult times.”

Stanhope agrees that the best way for brands to demonstrate solidarity is to show empathy with their customers and their supply networks. Who this message comes from is also important, though.

The same report by Opinium found 38 per cent of consumers want to hear from employees on the frontline of brands’ communications, followed by 31 per cent who want to hear directly from the chief executive or founder. Only 5 per cent and 4 per cent of those asked wanted to hear from influencers and celebrities respectively.

To then suddenly tell all its staff to get jobs at supermarkets when it was told to shut down and refuse to pay suppliers owed money, suggests its previous stance was purely driven by greed

Ahuja believes employees are now brand ambassadors. “Your reputation is in their hands, which is something all chief executives and communication specialists need to wake up to very quickly,” she adds.

As Beadle points out: “Co-op has done well, tapping into its community roots and putting a real face to its communications, using real employees and customers.”
But the general public has not responded so well to billionaire businessman Sir Richard Branson, founder of the Virgin Group, whose plea for state aid for his airline Virgin Atlantic fell on unsympathetic ears.

“The Virgin Atlantic brand reporting about unpaid staff leave, furloughs on government money and government bailouts to the tune of £7.5 billion has felt far removed from their celebrated promise as the ‘fun, friendly and fabulous choice’ to fly,” says Stanhope.

“While their needs as a business to weather this storm are completely understandable, it seems the brand itself is inextricably linked in the minds of the public with a high-profile billionaire owner of whom they simply expect more, even in a global crisis.”

Of course, many companies will have to break bad news to their employees and customers, but there is a way to deliver these announcements without causing serious, long-term damage to your brand reputation.

“Clear, timely and honest communications to staff, customers and shareholders is critical to maintaining a firm’s reputation,” says Louise Dolan, a partner at Camarco, a financial and corporate advisory firm. “If tough decisions have to be made, such as restructurings, furloughing or closures, explaining why and being transparent will show the integrity of the business and its senior staff.”

Keep consistent and authentic, advises Beadle. “When [pub chain] JD Wetherspoon said it was staying open during lockdown because pubs were essential, it was clearly trying to create a ‘bulldog’ spirit,” he notes.

“To then suddenly tell all its staff to get jobs at supermarkets when it was told to shut down and refuse to pay suppliers owed money, suggests its previous stance was purely driven by greed.”

One company that can certainly not be accused of greed is insurance provider Admiral, having stated “it isn’t our intention to benefit from the lockdown”. It announced a stay-at-home refund to its car and van insurance customers totalling £110 million, in recognition of there being fewer drivers on the roads.

“Brand is more than just the logo and colour scheme for a company. It should be how you feel about doing business with them; so it’s about a culture,” Beadle concludes. “If you still feel the way about a company in a crisis as you do during normal times, then the brand is strong and shines through.” 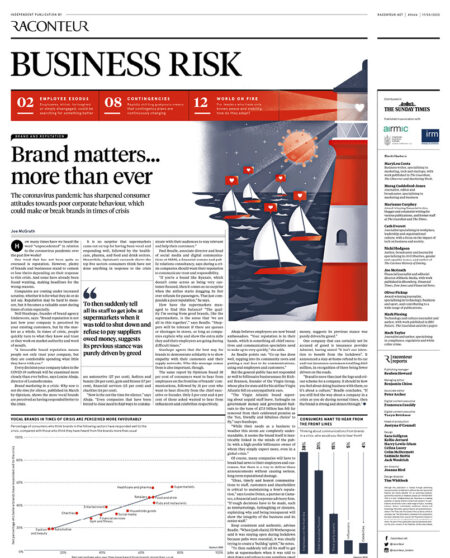 Why risk and insurance demand professionalism