The fanboy who queues for days in the rain outside an Apple Store to be the first to get his hands on a new product. The girl who has a Coca-Cola logo tattooed on her lower back. The grandfather who still splashes Brut aftershave all over, 40 years after boxer Henry Cooper made it cool.

All are examples of people who have fallen in what is now being termed “brand love” – being as enamoured of a company and its products and services as you are of a partner or best friend.

Although being loyal to a brand has been around ever since brands first existed, the idea that it could be scientifically studied really emerged in the late-1980s.

In 1986, Robert Sternberg came up with a triangular theory of interpersonal love, based on intimacy, passion and commitment, which researchers from the University of South Carolina then adapted to relationships between consumers and products. The authors, Terence Shimp and Thomas Madden, created a framework that marketers might use to show how people move from not liking a company to being loyal advocates.

Yet even then, Shimp and Madden argued for caution, saying that love merely provided a useful metaphor. They said: “We fully recognise that love relations between people are probably much more complex and certainly more bidirectional than are relations consumers have with inanimate consumption objects.”

To test the theory, marketers and scientists have, in the past three decades, used the latest technology to try to understand whether we really can fall in love in the same way with a Bang & Olufsen as we do with a boy or with a Gucci as with a girl. 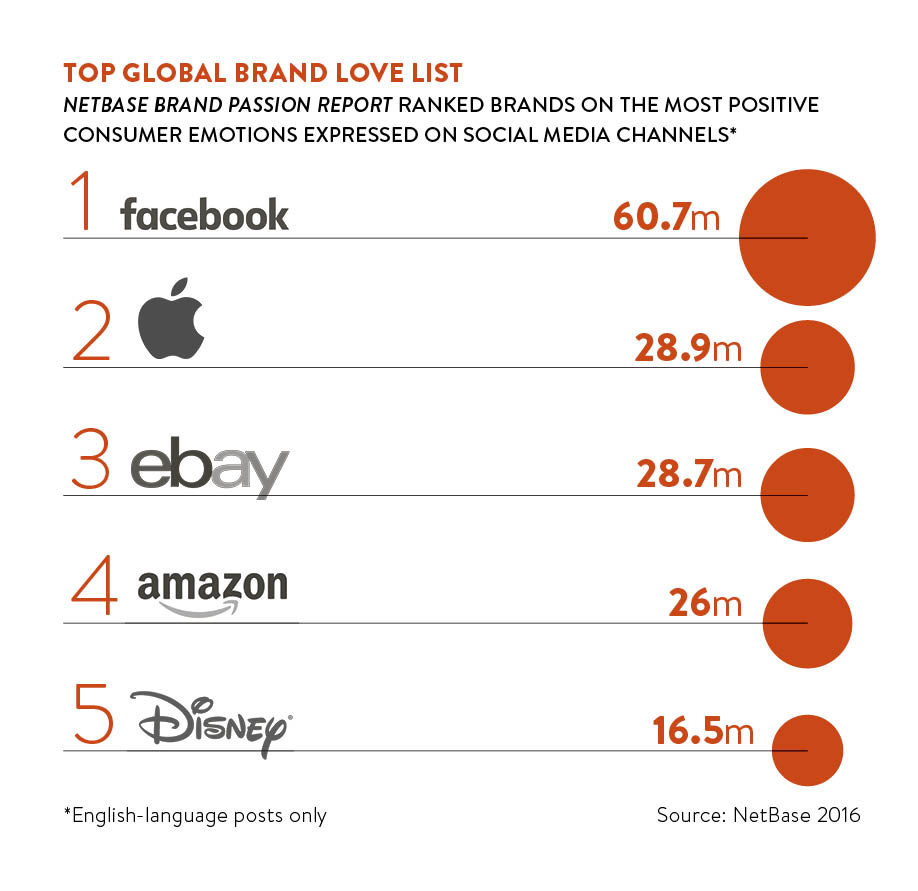 In 2006, Carolyn Yoon and fellow researchers at the University of Michigan placed subjects in an MRI scanner to see whether their brains reacted in the same way when they were asked to talk about brands, people they loved and other things such as objects and celebrities.

She concluded: “The neural responses associated with brand judgments… appear to accord with the sort of object processing found in previous neuroimaging studies. This pattern lends credence to the assertion that brand personality may not be processed like human personality and that it involves unique processes that do not extend to person trait processing. These findings serve to challenge the view that processing of products and brands is akin to that of humans”.

Cristina de Balanzó, founder of consumer neuroscience consultancy Walnut Unlimited, says: “Humans are highly adept at recognising and discriminating all manner of different types of people, objects and everything in between. Successful recognition is essential to survival, for example to detect a predator or discriminate food from non-foods.”

More recently, researchers from Bergische University Wuppertal in Germany measured arousal levels in subjects based on how sweaty their skin became when looking at the logo of a brand they claimed to love compared with looking at a picture of a loved one or friend. Dr Tobias Langner and colleagues found that those professing love for a brand couched this in terms of the rational benefits they got from the brand, such as product quality, while romantic love was much more altruistic.

Despite brand love not being the same as romantic love, companies have discovered they can influence consumer behaviour. As a result, the discipline of consumer neuroscience has grown dramatically in the past five years. A growing number of companies, particularly in the fast-moving consumer goods (FMCG) sector, have started using these techniques to market their products.

Phil Barden has worked for some of the biggest FMCG companies on marketing their products. While with mobile phone network T-Mobile, he engaged a German consultancy called Decode which used neuroscientific techniques to help companies market themselves.

“The most famous manifestation [of Decode’s work for T-Mobile] was the flashmob dance at Liverpool Street Station,” says Mr Barden. “We grew sales by 49 per cent, brand share by 6 per cent and doubled footfall into retail stores. We even increased scores on network quality even though we hadn’t changed anything. I had never seen such a cause and effect in my entire career.

“The more I talked to Decode, the more lightbulbs went off in my head. One of the team was a neuroscientist, another a psychologist. I asked them how come they knew this stuff? They replied ‘How come you don’t know it?’”

On the strength of the rebrand’s success, Mr Barden jumped from client-side to become Decode’s UK managing director and has written a book, Decoded: The Science Behind Why We Buy, to explain the concepts to a wider audience.

If you were to read the phrases ‘Intel Inside’ or ‘I’m Lovin’ It’, your brain would probably provide the accompanying soundtrack

Despite the success of the T-Mobile campaign, he says there is no hidden “buy button” in the brain which companies can activate by using psychological techniques. He points to the debunking of the idea that people can be manipulated by subliminal advertising, where consumers are supposedly influenced by marketing messages that are presented in a hidden way, by flashing a brand logo on a single frame of television, for example.

Supermarkets have famously used eye-tracking headsets to find out on which particular products a shopper’s gaze lands on to decide on the best layout for their stores. Online travel company Expedia, meanwhile, is using a technique known as facial electromyography. This watches the tiny movements of the zygomaticus muscles used to smile and the corrugator muscles that wrinkle your brow to see whether you like what they are showing you and to decide the best way to display travel options on their websites.

Brands are also bombarding you with other sensory experiences to make you love them more. For example, if you were to read the phrases “Intel Inside” or “I’m Lovin’ It”, your brain would probably provide the accompanying soundtrack. Supermarkets are also accused of using fresh bread aerosol sprays to make customers buy more, although these stories are probably apocryphal.

“Brands have learnt that to engage people we need to amplify experiences, making them more rewarding and this comes from immersing all senses,” says Ms de Balanzó. Loyalty to brands comes from repeated positive experiences, adds Dr Dimitrios Tsivrikos, a business and consumer psychologist at University College London.

“When an individual has a significant amount of contact with a brand, say more than three or four positive interactions, then loyalty becomes a lot stronger,” says Dr Tsivrikos. This loyalty is also reinforced when you are rewarded by fellow consumers, perhaps by getting a like on an image of a product on Instagram.

However, brand love, like true love, may not be forever. “If brands make a promise they cannot keep on price, value, longevity or the benefits promised, consumers feel they have been betrayed by that and tend to find alternatives,” he says. But just like in love, brands are often given second chances. “Normally, falling out of love with a brand takes more than one disappointment,” says Dr Tsivrikos.

The evidence of consumer behaviour after the Volkswagen emissions scandal is also an interesting point for anyone studying loyalty and brand love.

“We may hypothesise that the brand values were not truly affected,” says Ms de Balanzó. “At an explicit level – what people say – we may expect opinion to reflect the press backlash against the brand, but at a more implicit, emotional level, the connection to the brand still may be strong, even though people are unable to articulate it.”

Consumers also tend to remain in brand love more easily in times of uncertainty, for example in the wake of the Brexit vote, says Dr Tsivrikos. “People become very unadventurous with their choices. Loyalty becomes more important and we expect the most established brands will regain the market,” he says.

Loyalty sometimes breaks down – you probably have a number of loyalty cards for different coffee shops in your purse or wallet. Decode’s Mr Barden says “We have taught people to be promiscuous. It just becomes functional – after a certain amount of time you get a free coffee. If you continue, it is a race to the bottom.”

The brain can also pay strange tricks. “In blind taste tests, people prefer Pepsi over Coca-Cola, however if you tell them which brands they’re trying then the majority prefer Coca-Cola, even if it’s Pepsi in a Coke glass. There is something in the Coca-Cola brand equity that drives that preference,” Mr Barden concludes.

It’s certainly something to consider if you are thinking of getting a Coke tattoo. 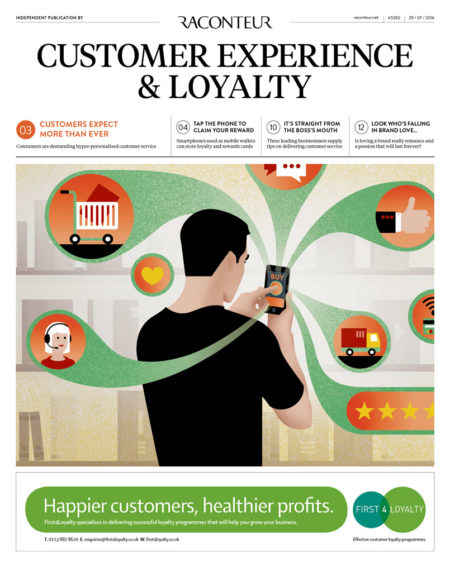 Customer experience game-changers from 3 bosses in the know

Tap the phone to claim your reward