They are the new kids on the block, but so far the so-called alternative business structures, allowing involvement of non-lawyers, have yet to make their mark

Around 5 per cent of legal services are no longer provided by traditional law firms, but by radical newcomers, set up as alternative business structures. Introduced by the Legal Services Act 2007, they heralded the biggest shake-up of the profession since the mid-1980s, when lawyers were allowed to advertise.

An alternative business structure (ABS) is an entity that, while providing regulated reserved legal activities, allows non-lawyers to own or invest in law firms for the first time, opening up what has been a closed profession.

Supporters hailed the creation of a brave new world where increased competition would provide consumers greater choice and access to legal and related services.

The reality, almost four years after the first ABSs came into being, has borne out neither.

New kids on the block

After much anticipation following the Act, the Solicitors Regulation Authority (SRA) unveiled the first three businesses granted ABS licences in April 2012. Among them was a supermarket, not Tesco, but the Co-op or to be technically correct, Co-operative Legal Services, set up in 2006 with big plans for its legal services offering.

The other two licensees were Oxfordshire high street firm John Welch and Stammers, and Kent sole practitioner Lawbridge Solicitors. Both changed their status so they could appoint non-lawyer directors, in the case of Lawbridge, the solicitor’s wife.

Among 10,500 law firms, there are now more than 500 ABSs, licensed by three principal authorities – the SRA, the Council for Licensed Conveyancers (CLC) and the Institute of Chartered Accountants in England and Wales (ICAEW), with the majority under the SRA’s regulatory umbrella.

The first three ABSs, to a degree, painted the picture of what was to come. Professor Stephen Mayson, law firm adviser and strategist, gives a rundown of the ABS players.

About half, he says, are traditional law firms that have converted to allow ownership by individuals who are not legally qualified, often relatives of lawyer-owners, managers or finance directors, or to take advantage of a full corporate structure.

Irwin Mitchell’s chief executive Andrew Tucker says the flexibility offered by the structure was the main attraction, allowing the firm to give ownership status to non-lawyers and to set up limited companies where the primary focus was not legal services within the group.

Then there are investments or acquisitions by related businesses, such as insurance companies, who enthusiastically jumped on to the ABS bandwagon after the practice of law firms paying referral fees in return for cases was outlawed by the Legal Aid, Sentencing and Punishment of Offenders Act 2012.

The larger commercial and City law firms remain uninterested or even hostile to ABSs, but this will change as the battle for talent rages

Besides the Co-op, household brands BT, Saga and the AA have made moves into the market, with mixed results. But grocery empire Tesco has shown no appetite to join in.

Professor Mayson says the “sensitivity of their legal elements to broader market reputation” can pose challenges to high street names in sustaining such legal ventures.

The 2013 scandal when the Co-operative Bank narrowly avoided collapse after uncovering a £1.5-billion capital shortfall, followed by its former chairman Paul Flowers making unfortunate headlines over his possession of illegal drugs, doubtless took the Co-op’s focus off its legal services.

Those seeking to reap the benefits of ABS status are wide-ranging. Doctors’ union, the BMA, and together the GMB and CWU trade unions, have set up legal services arms. Even Nottingham Law School, part of Nottingham Trent University, and an un-named HR specialist have applied for licences.

But the biggest threat to traditional law firms comes from the march of the accountants. The number of accountancy firms licenced as ABSs by the ICAEW hit 100 in the autumn and three of the big four, KPMG, EY and PwC, all have licences.

Tony Williams of consultants Jomati says: “They have the resources to get it right – it will be important to watch them.”

Some of the earlier ABSs have not covered themselves in glory, which has caused others to get a bit nervous

In June, Midlands-based Gateley became the first UK-listed law firm, floating shares on the AIM (Alternative Investment Market). But one of the biggest hitters is Australian-headquartered Slater & Gordon, which in 2007 became the first law firm in the world to go public, listing on the Australian Stock Exchange. After scooping up a number of UK practices, including top-100 firm Russell Jones & Walker, it has become one of the UK’s largest consumer law firms.

Barristers are slowly getting in on the action too. A small number have set up SRA-regulated ABSs and their own regulator, the Bar Standards Board, has this year applied to the uber-regulator, the Legal Services Board, to become a licenser of advocacy-focused ABSs.

Professor Mayson points out that the larger commercial and City law firms “remain uninterested or even hostile” to ABSs, but he predicts this will change as the battle for talent rages.

Jomati’s Mr Williams notes that, after an initial flurry, the ABS surge has been a “slower burn than anticipated”. He says: “This is partly down to the economy and partly due to the fact that some of the earlier ABSs have not covered themselves in glory, which has caused others to get a bit nervous.”

The retail space has not seen the surge that was anticipated and, with the exception of the likes of Riverview, the “fundamentally new models” have been “in the tens”, he adds.

As Irwin Mitchell’s Mr Tucker says, the interest of investors and others outside the legal profession has been “more muted than it might have been” due to the recession, which has meant ABSs have “not developed to the point where they might otherwise”.

Developing a large consumer legal brand, says Mr Williams, takes deep pockets.  Slater & Gordon has tried to establish itself as such, with some success. According to its own internally commissioned research, 24 per cent of people in the UK know of it.

Marketing network Quality Solicitors, founded in 2008, has attempted to do the same thing, without the need for its members to become ABSs. The group has 100 partner firms operating from 200 different locations across the UK.

A two-year tie-up with WHSmith, which saw “legal access points” spring up in 150 branches of the stationers, ended in August 2013 after Quality Solicitors admitted the relationship had not worked for all firms that had signed up.

Across the Atlantic, retail giant Walmart has entered into a similar arrangement with Toronto-based Axess Law. Whether this spreads in the UK to Walmart-owned Asda remains to be seen.

While ABSs have not been the “big bang” that some predicted, SRA chief executive Paul Philip is positive. He believes that most new firms will look to set up as ABSs as solicitors move to become business people first and lawyers second. “If you’re starting a legal business today, why would you not adopt an alternative business structure?” he asks.

Even Lord Chancellor Michael Gove is on board, backing moves for legislative change to make it easier to approve and regulate them. So watch this space – the ABS boom could be yet to come. 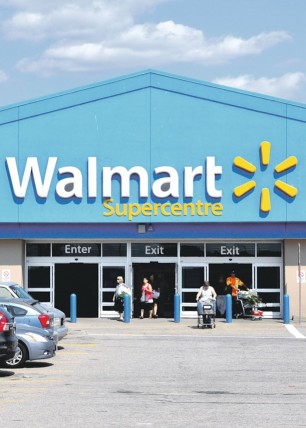 While “Tesco law” has not taken off here, the Canadians or at least Ontarians have got what you might call “Walmart law” with a law firm operating inside some of its supermarkets.

Axess Law, founded in 2012 by Toronto lawyers Lena Koke and Mark Morris, seeks to provide accessible legal services available at times that suit the customer, and with clear and transparent fixed pricing.

In a tie-up similar to that embarked on in England and Wales by Quality Solicitors and WHSmith, Axess has had a presence inside stores of retail giant Walmart for the last two-and-a-half years.

Mr Morris says: “We are in ten locations across Toronto and will be in 20 by the end of 2016.” The law firm is also seeking to spread its wings outside of the province from January.

Its staff of 42, including ten lawyers, have a bright-orange branded retail presence inside the Walmart stores, operating from 10am to 8pm, seven days a week, offering help with conveyancing, wills, probate, power of attorney and notary services.

They offer a “wills while you wait” service, which takes customers through the whole process in 45 minutes to an hour, and for $99 they leave the store with the sealed document in hand.

“Our proposition is to increase access to justice,” says Mr Morris. “Statistics showed that 56 per cent of Canadians do not have a will. We have seen 25,000 people over the last 18 months and prepared 13,000 wills. It’s making a difference. We are meeting the access to justice mandate that we have set ourselves.”

Before entering the legal world, Mr Morris and Ms Koke were in retail, helping professionals to set up enterprises. “We distilled the concept of ‘best retail practice’ and thought it could be applied to law,” says Mr Morris.

That means opening on Sundays and beyond 5pm, and having clear pricing. Lawyers are “not hidden, but in plain view, which breaks down barriers, encouraging approachability and dialogue”, he says.

So far, the venture seems to be a success. “Our profits are healthy and strong,” says Mr Morris.