Data analysis is now an essential business skill for all managers, but many still struggle, as Jessica Twentyman discovers

We are living in a data economy and the UK must get up to speed fast in data and statistical analysis – or we will be left behind.

That is the warning issued by Hetan Shah, executive director of the Royal Statistical Society, which co-produced a recent report into the UK’s big data skills gap. The report, entitled Model Workers, was also produced by the innovation charity Nesta and Creative Skillset, the sector skills body for the UK’s creative industries.

The authors interviewed experts from 45 data-intensive businesses in the UK and found that four out of five struggle to find the skills they need. Good candidates are in short supply. Seasoned data analysts are very expensive; junior ones often require extensive training. There are good analysts who can’t code and good coders who can’t analyse.

So what’s the answer? According to the report, solving the skills gap will take a concerted effort by policymakers, educators and employers. But some employers are already taking matters into their own hands.

In June, UK-based software company Wandisco announced the launch of its Big Data Apprenticeships Scheme. Three months on, the firm has already taken on three apprentices and the next intake is likely to be bigger, between ten and fifteen new recruits, says Wandisco chief executive David Richards.

“It was clear to us that we had to do more to create our own ‘home-grown’ big data specialists; to take raw material, so to speak, and mould it into the skills we need,” he says. 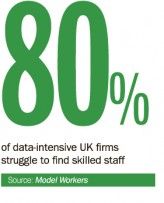 But it’s not just finding data scientists and data analysts that bosses need to worry about, according to Tom Davenport, a US academic and author specialising in data analytics. They also need to do more to ensure that their business executives and line managers are conversant with analytic terminology and methods.

“Data analytics are increasingly embedded in everyday business processes. This makes it extremely important that managers don’t view analytics as somebody else’s job, but instead as a key part of their own decision-making,” he says. They should be pretty confident at working with data, able to form a hypothesis, analyse relevant data and interpret the results.

And at the same time, Professor Davenport adds, they must be able to work well with data scientists and data analysts when the need arises.

“While I’m a big fan of analytics and data as the basis for decision-making, I still believe that the intuition and experience [of business managers] have a very valuable role to play,” he says. Business managers can set the context for a data scientist’s work by helping to establish appropriate and relevant metrics, for example, and proposing what-if scenarios for predictive modelling.

This needs to be a major consideration when bosses come to decide how to organise their data expertise, say the authors of Model Workers. Should it be located in its own, central department or embedded in line-of-business departments?

Each approach has its pros and cons. A central team creates a critical mass of skills and encourages standardisation in tools and approaches, but also runs the risk of becoming isolated from the rest of the company. Embedding data talent in business departments, meanwhile, puts it closer to the “burning questions” that occupy those departments, but can lead to a siloed approach.

With that in mind, data-savvy companies are increasingly setting up communities of practice for data analysts across the organisation and defining central standards. But, at all costs, they don’t neglect their data talent – in the data economy, it’s a matter of sink or swim.

“They can’t afford to pay the kinds of fees that data scientists command, but the work they could achieve, if they had better insight, could make an enormous contribution to UK society,” he says.

With that in mind, Mr Ross last year set up Datakind UK, a charity that works with other charities to address their big data challenges by putting them in touch with volunteer data scientists.

Children and young people’s charity Buttle UK, for example, was looking to find correlations in the data it collects on the families it works with, involving incidents of domestic violence, mental illness, substance abuse, dependency on food banks and so on.

By detecting patterns and associations, Buttle will have better grounds on which to disperse the £3.7 million in direct-support grants it awards each year and more closely align its services with identified needs, says Madeleine Thornton, the charity’s monitoring and evaluation manager.

Now it’s well on its way to achieving that goal. “Some of the connections we were able to make at Data Dive were really surprising and we’ve now got firmer foundations on which to build up our own analytics expertise,” she says.

The next Data Dive event will be held in September.