When sick we may turn to medicines to get better. However, swallowing pills and downing bitter liquids to overcome illness can be cumbersome, even at the best of times, let alone remembering guidelines on when to take the next dose. But skipping doses, doubling up or not completing prescriptions is commonplace. This non-adherence to guidelines can lead to undesirable outcomes, such as recurring infections or side effects.

In the UK, three people die every day from asthma. The Royal College of Physicians states that poor adherence to recommended asthmas medication or action plans is part of the cause. This non-adherence to prescribed medicine sees the NHS waste £500 million a year. The figure is compounded by 50 per cent of patients who do not take their medication correctly. In the EU, 200,000 deaths occur each year because of missed doses of medication.

“£500 million is conservative,” says James Murray, sales and marketing director at MTS Medication Technologies, on the cost of non-adherence in the UK. “It does not include the measurement of wasted drugs, people who don’t take them, additional costs such as people staying in hospitals and medication that is out of date.”

In the United States, this cost is estimated at a staggering $100 billion to $300 billion a year, which stands at three times NHS England’s entire budget. This includes costs from avoidable hospitalisations, nursing home admissions and premature deaths.

According to MTS Medication Technologies, one in twenty patients in the UK take more than ten types of medicines each day. “The more types of medicine a patient needs to take, overall the less compliant they can become with respect to their dosage timings,” says Mr Murray, on the overwhelming choice of medicines available, each with a different dosage cycle.

“Patients are at their most vulnerable when they are about to take their medicine for the first time,” he says. But with so many different types of packaging and the excess amount of information on such a small surface, it is no wonder patients are left completely bewildered. 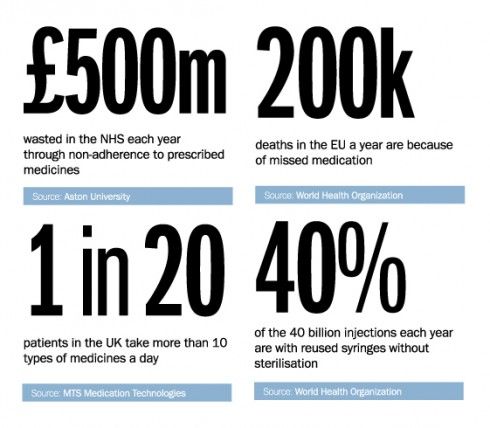 Simon Wight, managing director of Greenwich Design, says iconography – disseminating content using images – can alleviate the confusion. “In the EU, many health companies are trying to ensure that their packaging works across multiple languages,” he explains. “The main barrier is language, whereas numbers and visuals are universal.” Greenwich Design recently redesigned the entire range of packaging for Milton Healthcare.

However, Mr Wight cautions against the overuse of iconography. “These are only worth having if they’re universally understood,” he says, stressing the need for more market research on usage.

Advice to refer to a website is another factor that contributes to non-adherence. “Being redirected to a website requires taking an extra step, which is unnecessary,” he says. “Customers will choose to believe what’s on the pack first. The short-cut here is that it gives the patient the information on dosage quickly. The battle of psychology is done in milliseconds.”

Solving the issue of non-adherence is not easy. The amount of space allocated for on-pack communications can be split into three categories: 50 to 60 per cent for the necessary legalese, 25 to 30 per cent for a company’s own messaging, leaving only 10 per cent to the designer.

In addition, any medicines listed as certain types of “food” will have to comply with new EU laws after December 13 this year. This new regulation will see, for example, the “best before” date printed on one area of the label in large legible print. The new labels must also highlight allergens, such as milk and nuts, listed in an appendix to the regulation.

It is not just medicine that is subject to non-adherence issues. The World Health Organization estimates up to 40 per cent of the 40 billion injections administered each year are delivered with syringes reused without sterilisation, allowing diseases such as Hepatitis B and C as well as HIV to be transmitted and resulting in 1.3 million in deaths.

This global healthcare problem has led to a redesign in syringe packaging by the University of Huddersfield where the changing colour of a syringe can warn patients when the needle is unsafe. Like an opened carton of milk, the syringe’s exposure to air, specifically carbon dioxide, activates an ink after a minute, turning the label to red. This alerts patients to the fact that the syringe has been used once and is no longer sterile.

The design, developed by Dr David Swann, received the 2014 World Design Impact Prize, which is awarded every two years by the International Council of Societies of Industrial Design.

Packaging alone is not the solution. It may be that both graphics and structure play a role. “Around 200,000 patients in the UK require further support to take their medication correctly – above and beyond existing adherence systems,” says Mr Murray of MTS Medication Technologies.

Consideration of the use of biometrics, such as with the new Apple Watch, can focus on basic parameters, including exercise, diet, stress and medication scheduling. Then there are “clever card” technologies which prompt and record medication adherence. As soon as a blister is opened a message is sent to a cloud-based system letting carers and pharmacists know the medication has been accessed.