Online or bricks-and-mortar: shopping is getting the best of both worlds

People have always complained about retail innovations. When hawkers started selling their wares in the bathhouse beneath Seneca’s apartment, extending a seamless shopping experience beyond the forum in first-century Rome, he was furious complaining about the noise of the “pastry cooks with their varied cries, the sausage dealer and the confectioner, and all the vendors of food from the cook shops selling their wares”.

Today, shoppers are keener on a seamless link between shop and home, says Richard Lowe, head of retail and wholesale at Barclays. “Mobile has helped blur the lines between physical and online retail with ‘showrooming’ – consumers visiting stores to try products before purchasing online – putting e-retailers in direct competition within the territory of their physical counterparts,” he points out.

This seems, at least initially, to be another nail in the high street coffin – customers trying in-store then buying at a discount online. Steve Borges, however, who is co-founder at e-commerce agency Biglight, thinks mobile is potentially more useful to bricks-and-mortar retailers than purely e-commerce operations.

“We know that a real frustration for customers is when the size they are looking for isn’t available in-store, once they have decided to buy it,” he says. “In the future, you will see retailers present a different version of their mobile sites to customers in-store, using in-store wi-fi as a trigger that allows them to find the product they are looking at by scanning the barcode, for example, then place an order using click and collect in that store or another. They’ll be using their phones, making this process frictionless for customers.”

This artful blend of new tech and old stone is at the heart of the rise of omnichannel retailing in the age of “me-commerce” where the consumer is boss. Omnichannel, in its simplest definition, is a complete combination of in-store and online, using every single channel from mobile and social to personal shoppers and in-store events.

“You hear plenty of retailers saying they need to be omnichannel – well yes, but what that means varies enormously,” according to James Lovell, European retail expert at IBM. “The traditional model of retail is to own a big space, buy a bunch of stuff you think will sell, try and sell it, then offer it at a discount if it doesn’t sell. Over the past few years, the more mature retailers have realised that to master omnichannel, retailers need to create a seamless customer experience across all of these platforms.” 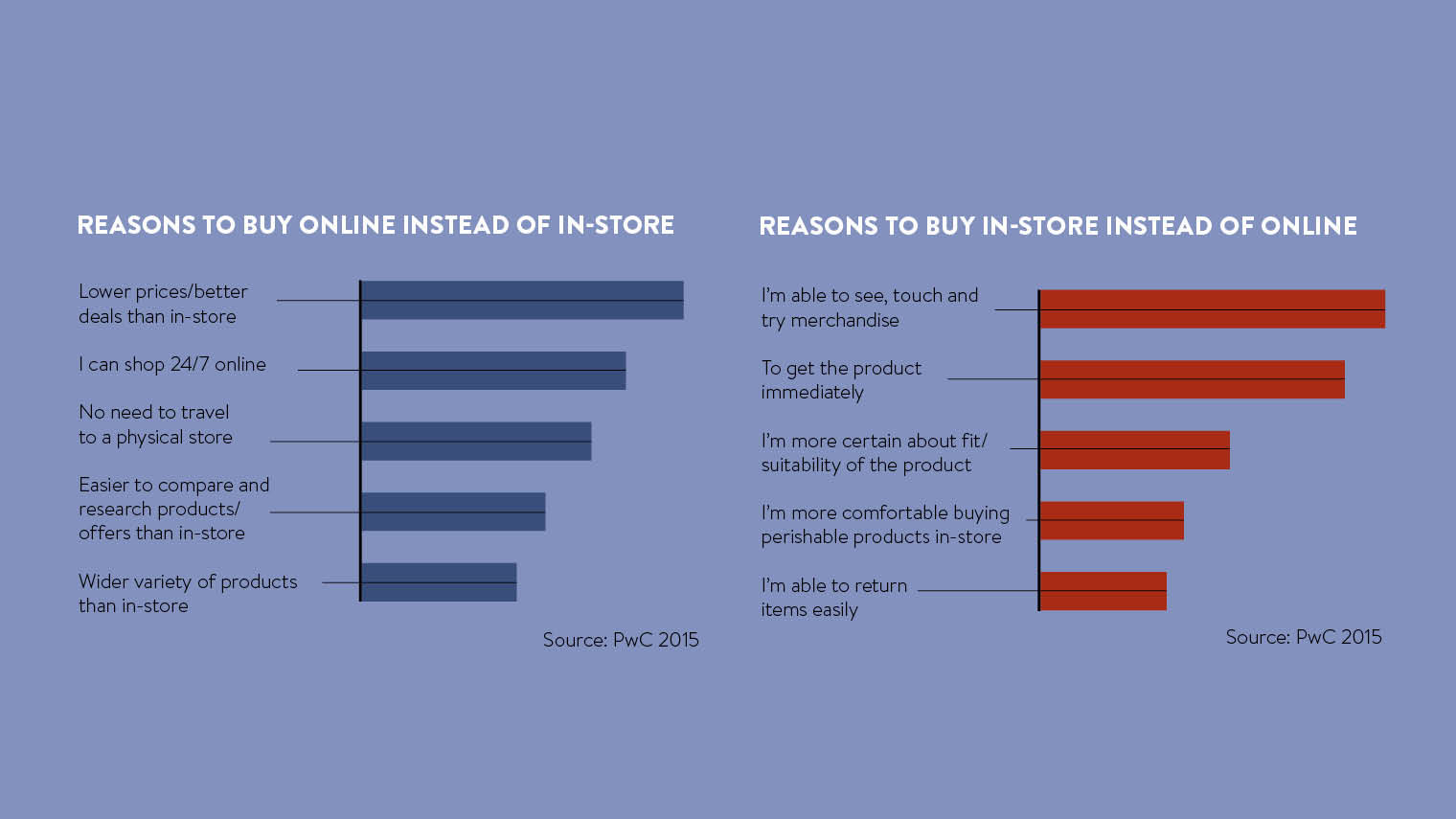 Over at Boots, online and in-store have merged so effectively that, as well as click and collect options as pioneered by John Lewis, staff can order out-of-stock items for customers to be delivered to their homes or to any other Boots store. While M&S has completely restructured its systems over the past 18 months to link up front end, back end and distribution.

This sort of reorganisation – the stripping down of silos – is the key to profitability, according to a February report for JDA Software by PwC. This global survey of more than 300 retail and consumer goods chief executives found that only 18 per cent have eliminated operational silos to deliver seamless omnichannel shopping experiences. Those who had eliminated silos expressed greater confidence in revenue growth (59 per cent compared with a 48 per cent average for all chief executives) and profit growth (63 per cent against 43 per cent for those still siloed).

“It’s really about retailers still reeling from the ‘Amazonification’ of shopping,” Mr Lovell explains. “Amazon has created a level of expectation in consumers that bricks-and-mortar businesses are only just catching up with. The exciting part of this is what it allows stores to become.”

Futurologist Ian Pearson imagines town centre flagship stores acting as theatrical entertainment spaces, with items home delivered by the end of the day. Smaller branches near transport hubs might become simply click and collect centres, a model Argos is rolling out. According to research from Barclays, consumers anticipate using in-store or locker collection more frequently in the future with Royal Mail coming out as a trusted brand for transport hub locker collection points.

Combining all versions of these stores’ back ends into one system allows retailers to engage with customers as efficiently as online rivals, but with more intimacy, says Biglight’s Mr Borges.

“We’ll see retailers capturing e-mail addresses at the point of purchase in-store, so that the details of items purchased can be accessed via the My Account section of the website, removing the barrier between online and offline worlds,” he says. “This is particularly interesting for pre-ordered or made-to-order products – furniture for example – that are bought in-store, as the customer can then look at the status of their order online without having to call or visit the store.” 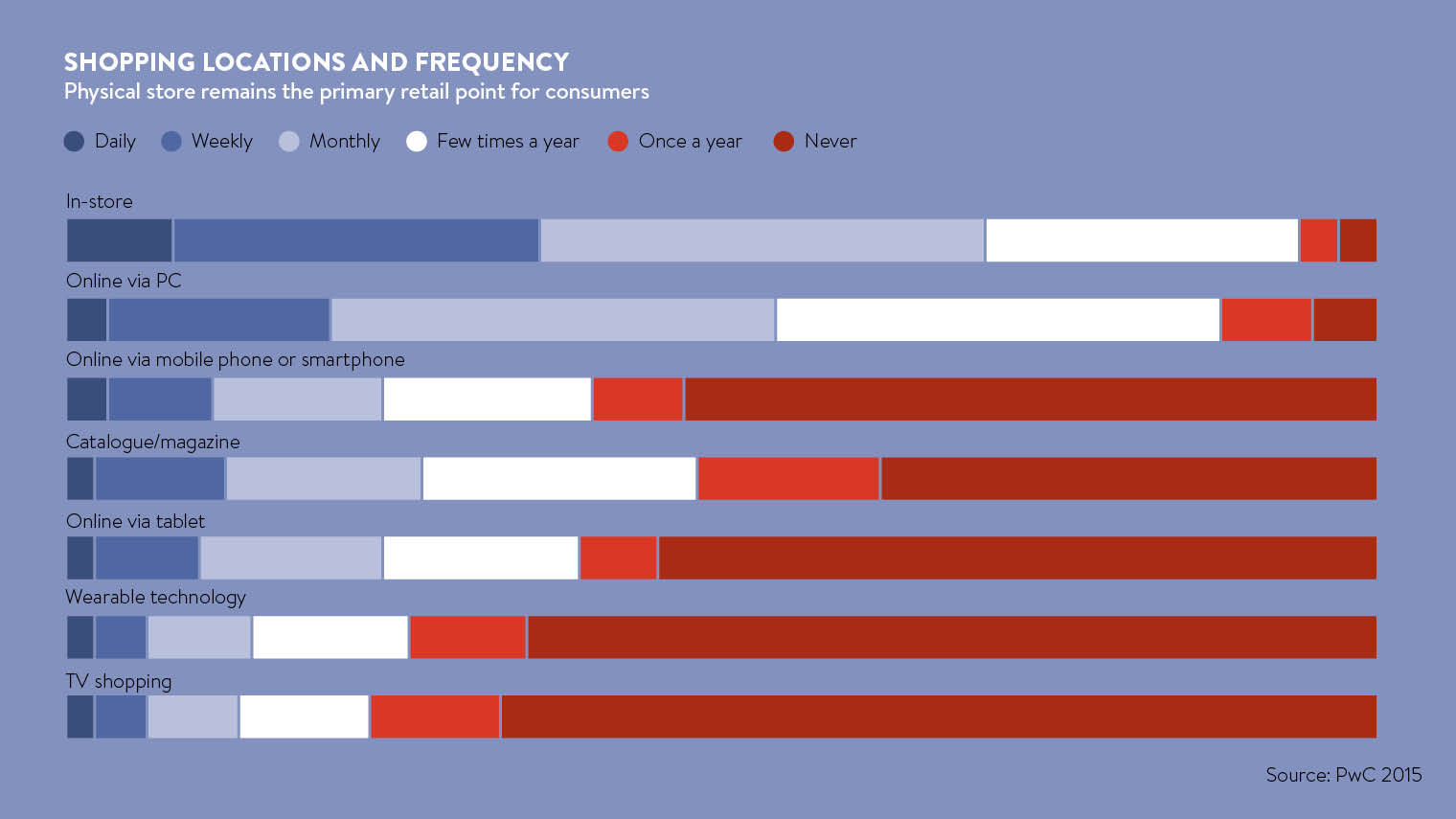 Visiting the store, of course, allows bricks-and-mortar retailers one great advantage. “Sales staff can make the greatest impact especially for luxury retailers versus other sectors,” says Ryan Fisher, co-author of Retail Operations: People are still the Best Investment, a report for management consulting giants A.T. Kearney. “Staff are driving the brand, driving the purchase and creating what may be described as ‘irrational loyalty’– the customer will choose the retail brand first, regardless of price, location and so on.”

There’s even more than reputation at stake, according to Diana Verde Nieto, chief executive and co-founder of Positive Luxury, which awards the Butterfly Mark, a digital and offline ethical trust mark. She believes leading retailers can and are already using their influence to encourage their staff and customers to make responsible choices.

“This change of attitude will help luxury brands start to see the benefits of implementing best practice in their own business operations,” she says. “The possibilities offered by in-store conversation allowing stores and luxury brands to differentiate themselves from their competition, increase brand loyalty and enhance their reputation in a way purely digital retailers will find increasingly difficult.”

Curiously, the hottest tech retailer in the world, Amazon, is gradually embracing the bricks-and-mortar model

Ms Verde Nieto namechecks Selfridges, but her position is supported by Christopher Bailey, chief executive and chief creative officer of Burberry. Today’s luxury customers, Mr Bailey insisted when unveiling Burberry’s three-year omnichannel strategy this month, are looking for experiences, newness, authenticity and storytelling, which they want to see delivered through service-driven and personalised contact with, of course, greater use of technology, particularly mobile.

Despite the obvious opportunities, many retailers facing tough trading conditions are wary of embracing this new philosophy. Integrating relevant back and front-end systems is hard and very expensive, requiring expertise that many retailers lack because many of the best engineers and designers are looking to work for technology companies.

Curiously, the hottest tech retailer in the world, Amazon, is gradually embracing the bricks-and-mortar model. At the moment, Amazon has just one store, a bookshop in Seattle. During May’s annual general meeting, however, chief executive Jeff Bezos announced a rolling expansion programme starting in San Diego and spreading across the United States, opening possibly as many as 400 bookstores.

“We’re definitely going to open additional stores,” he told shareholders. “How many we don’t know yet.” Other US online retailers, including fashion site Bonobos and opticians Warby Parker, are also opening physical stores, with online make-up subscription service Birchbox cutting back on their online overheads to open bricks-and-mortar outlets.

In the UK, according to one retail expert responsible for the planning of out-of-town shopping centres, old-school stores are likely to resist such a move. “We’ve already had some interest from Amazon,” he says, “but if you mention that to existing retail
tenants they effectively threaten to walk out on you. It’s going to take some time before they let online rivals into prime retail real estate.”

It looks like moving into omnichannel will be a one-way ticket for a while yet. Seneca would be proud. 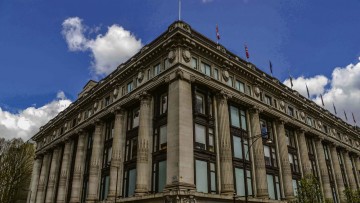 Selfridges opened more than 115 years ago – and yet its seamlessly linked on and offline presence puts almost every modern retailer to shame. The physical and digital worlds share the same buying team and staff swap between the two to ensure a consistent culture and complete breakdown of silos.

Why would a high-end department store with only four bricks-and-mortar stores work so hard? Selfridges hosts an impressive 15 million visits a year to its Oxford Street department store, but earns 100 million visits to its website, 25 per cent of which come from overseas, across 120 different countries. Two thirds of all purchases made from Selfridges overall have a digital element – some recent sell-out items had half their purchasers coming from Japan.

“For most of our history it used to be that shopping was a Saturday afternoon pastime,” says the company’s omnichannel director Simon Forster. “Now the following week’s shopping starts online on Sunday night and could be concluded either in-store or out. You have to be present every step of the way.”

Over the past 20 years, Selfridges has gained a powerful reputation for understanding the emotional side of physical world shopping – its window dressings are works of art and in-store events can range from philosophy talks to circus shows. “People visit Selfridges for the experience, for the sense of fun and for the customer service,” managing director Anne Pitcher explains. “We have to ensure that part of our offer is seamlessly connected as well.”

A new app enables customers to shape their own preferences and receive suggestions. “We’re not a discount retailer, so we’re not about sending people deals and bargains – and we’re not plundering data,” says Mr Foster. “We’re about curating, so we like to offer our customers things they don’t know they want yet.”

Record annual profits in 2014 and 2015 suggest the company knows what it’s doing.