We live and work in a unique time, when the pace of change for businesses – and for their culture and technology – is faster than it has ever been.

We know this from our own individual experiences and observations, but take the example of the United States’ Standard & Poor’s index of 500 leading shares. In 1957, when it was founded, companies that joined the index had an average age of 75. In 2003, the average age of new names on the list was 25. Just a decade later, in 2013, that figure had fallen to just 10 years.

In the last 10 years, the way we work has changed too. On average, the amount of time we spend looking at screens, whether smartphones, tablets, laptops, desktops or television, now stands at around 12 hours a day. That may come as a surprise, but it also raises questions about work-life balance and creating a culture that is both sustainable and effective.

Finding answers to these questions is important, not least because it is the only way to get the best out of this powerful technology. As we’ve seen, some people have proved that it can be used to do remarkable things. Take Uber, which is now in 60 cities spread across 22 countries. You can use it to get a cab or share a ride for much less than this would have cost you before.

In the home, there’s Nest, which Google recently acquired for $3 billion. It enables your home to learn your habits and preferences and can help to cut household energy bills by up to half. And in hospitality, think of the way in which Airbnb has disrupted the industry, filling 100,000 rooms every night.

What’s even more remarkable is that as recently as four years ago, none of these companies even existed. For those who haven’t already taken it on board, the message is clear: businesses and the people who work for them have to continually be prepared to transform the way they do things, or face the consequences.

There are some other criteria that effective, successful, digitally-enabled businesses tend to fulfil. They also:

On top of this, new successful companies seem to be using technology not only to transform the services and products their customers can access, but also to change the way that their employees work, fostering a project-driven ‘anytime, anywhere’ work culture that embraces autonomy and flexibility.

On average, the amount of time we spend looking at screens, whether smartphones, tablets, laptops, desktops or television, now stands at around 12 hours a day

It’s likely that in the next few years we will see more and more businesses being influenced by flexible working practices and listening to how their staff tell them that they work best. However, the data from the survey suggests that the most important influence on how companies evolve still looks set to be their customers. When asked to name the two factors that would be most important in driving the transformation of their business, more than half (55 per cent) picked out improving the customer experience. Innovation, which was mentioned by 45 per cent of respondents, was deemed the second most important factor.

But this is just the tip of the iceberg. Inside the report there is a whole host of information that has been designed to uncover and interpret the perceptions of senior figures (from a range of roles) at UK organisations. What changes and trends have they noticed? What priorities have they set? What do they expect to see in the future? And what does it mean for the way we all work?

The data and analysis has been broken down into four sections; Transformation, Business, Technology and Culture. This is partly to make it easier to digest, but also to introduce and explain the concept of transformation before examining how it can – and will – be applied to different elements of the way we work.

This study on a selection of UK-based business leaders, produced by Raconteur and sponsored by Google Atmosphere Week, was conducted between March-July 2014. A total of 247 responses were incorporated after cleaning the data. Respondents were asked to complete an anonymous online survey about their beliefs and predictions around business transformation.

Business transformation in this study has been defined as the business, digital and human capital strategies that organisations need to consider in order to manage change effectively and increase workforce performance. The individuals that responded to this survey covered a broad spectrum of industries in terms of both their size and main areas of activity.

The 247 UK-based respondents were broken down by business orientation, size of organisation, primary sector and job role. 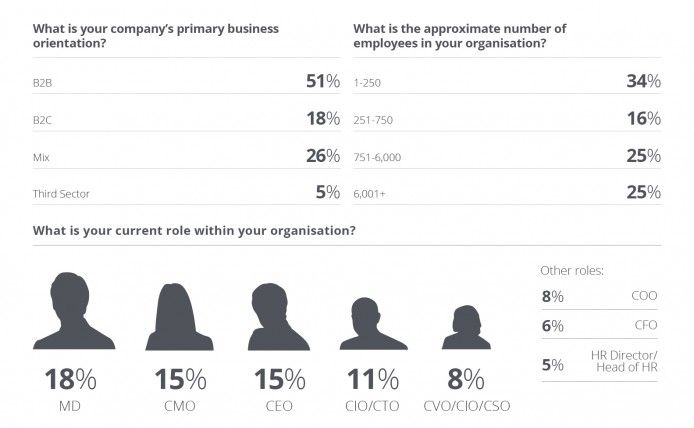 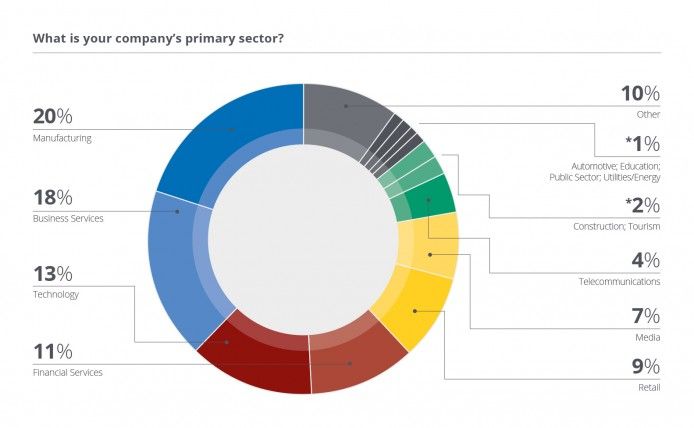