Just as the variable output of renewables is becoming an issue of grid management, a raft of technologies has emerged to support their expansion through energy storage

Walk down any suburban street and you’re likely to see at least a few domestic roofs glittering with a high-tech covering of solar panels. Environmental contribution aside, the growth of renewable energy technologies such as solar and wind nonetheless presents a tricky proposition in some quarters.

Renewable energy capacity grew by 20 per cent in the UK between 2013 and 2014, and 30 per cent the year before that. Needless to say, as their contribution has become more influential, the innate variability of the sun and the wind makes matching supply and demand across the nation’s electricity transmission and distribution grid considerably more challenging. The wind and sun simply cannot be relied upon to deliver on demand.

Central to resolving the issue of renewable energy integration is the development of effective and low-cost electricity storage at a range of scales from domestic to utility. In the developing world, where grid access is not available for millions, storage also offers the potential to transform access to reliable energy. Where nations are increasing penetration of renewables, storage offers a route to system security and reduced investment requirements. For the home owner, storage technologies coupled with rooftop solar could revolutionise electricity production as it becomes increasingly localised.

Electricity storage and recognition of its obvious advantages is not a new development. Indeed, there are countless concepts under development, including flywheels, super-capacitors, compressed air and chemical flow batteries. These different technologies offer various advantages in terms of cost, maximum power density, response time energy yield and so on.

The most successful electricity storage technology is pumped storage hydropower, with some 99 per cent of total storage capacity installed to date. In the UK, the Dinorwig pumped storage power station was fully commissioned in 1984. Located in Snowdonia, it uses off-peak power to pump water into an upper reservoir before releasing it back through the powerhouse when required during hours of peak demand. With six 275 megawatt (MW) capacity reversible pump-turbines, Dinorwig is capable of reaching maximum generation in a matter of seconds.

More recently, SEE’s Coire Glas scheme in Scotland was granted approval in December 2013. This is a proposed £800-million pumped storage project with a capacity of 600MW, though a final investment decision has not yet been made. Nonetheless, despite its attractiveness as an option for large-scale electricity storage, geographical constraints limit hydro storage to some extent. 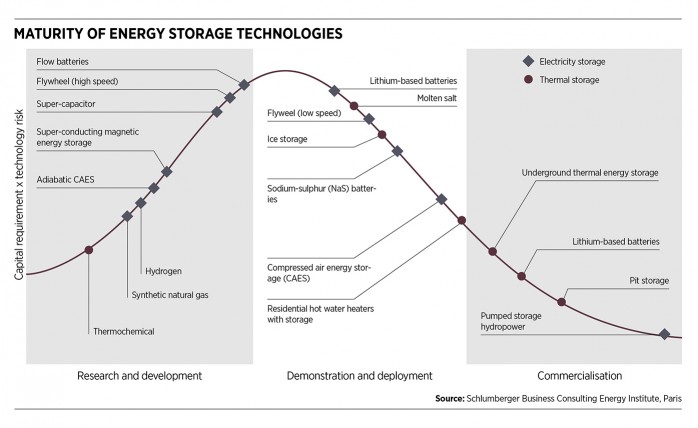 Assessing plans for pumped-storage hydroelectricity in 26 countries, IRENA suggests the total capacity will increase from 150 gigawatts (GW) in 2014 to 325GW in 2030. However, as part of a roadmap towards transition to 45 per cent renewable energy by 2030, the agency also forecasts that some 150GW of battery storage will be in place by then. Much of this additional storage capacity is projected to come from discarded automotive batteries that are expected to become available from 2028 onwards.

Similarly, in its Technology Roadmap published last year, the International Energy Agency (IEA) concludes energy storage technologies are valuable in most energy systems, with or without high levels of variable renewable generation. They note that some smaller-scale systems are already cost competitive or nearly competitive in remote community and off-grid applications. The IEA argues that to support electricity-sector decarbonisation, an estimated 310GW of additional grid-connected electricity storage capacity would be needed in the United States, Europe, China and India.

A key conclusion of the IRENA analysis is the falling costs associated with relatively recent developments in consumer electronic and electric vehicle battery storage sectors. New analysis from Lux Research backs up this assertion, concluding that best-in-class players such as Panasonic-Tesla will achieve 35 per cent reductions in the price of lithium ion batteries over the next decade, pushing the cost down to $172 per kilowatt-hour (kWh) in 2025.

Falling costs are suggestive of further market expansion and this is a key reason for the emerging dominance of lithium ion technology in the battery storage sector.

Indeed, Li-ion batteries are found in 90 per cent of the systems mooted in 2014, Lux says, accounting for 419MW of proposed storage systems over the year.

However, UK-based energy storage company Oxis’ chief executive Huw Hampson-Jones explains that while lithium ion and related technologies have taken an early market lead, the battle for the best battery chemistry is far from over. Oxis uses lithium sulphur technology in its 3kWh batteries, which can be connected in series to provide 12kWh of capacity, suitable for the majority of European domestic installations.

More significantly, with a theoretical energy density five times higher than lithium ion, the material has scope for further development, Mr Hampson-Jones says, suggesting a cost trajectory below that of lithium ion. 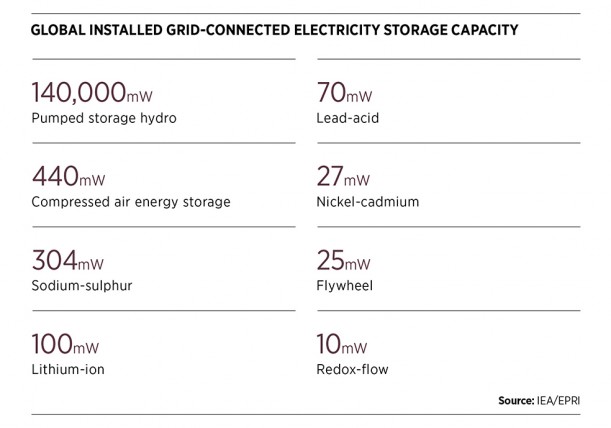 Isentropic is another energy storage company with a novel technology, in this case pumped heat electricity storage (PHES) which does not include any kind of battery chemistry.

Jonathan Howes, chief technology officer at Isentropic, explains that the company offers a system that can boost the economic attractiveness of gas turbines as an interim technology. Gas turbine power can be boosted by injecting hot compressed air between the compressor and the combustor.

In addition to standalone electricity storage, the company’s systems can be integrated into gas turbine power plants to smooth capacity fluctuations and boost output when required, even to more than its rated capacity. Power boost levels of around 20 per cent are feasible.

Certainly, grid-scale energy storage is taking off, with 450MW and 730 megawatt-hours (MWh) of systems installed in 2014, according to Lux Research. Globally, as of January 2015, 1,100MW and 2,523MWh of grid storage has been deployed across 605 projects, Lux says, driven by demand-side management and renewables-integration requirements.

Further cost reductions are to be anticipated and with a keenly priced alternative to new generating capacity a practical reality, a new integrated energy storage model cannot be far behind. 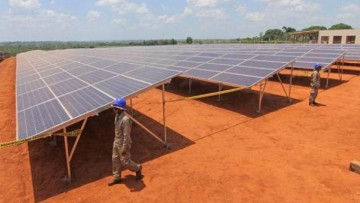 The world’s largest photovoltaic or PV-diesel-storage hybrid power plant has been built in the northern Bolivian province of Pando.

With a PV output of more than 5 megawatts (MW), about half the annual energy demand coming from the provincial capital of Cobija and neighbouring towns will be produced by solar. These communities, which comprise more than 49,000 people, are not currently connected to the electricity distribution grid and have previously exclusively used diesel generators.

Operating in conjunction with the solar plant and its16MW of diesel generation capacity, the storage system is designed to deliver continuity of supply while optimising PV output. The hybrid system is expected to offset more than 1.9 million litres of fuel used annually.

Commenting on the development, Ignacio Quiles, managing director of Saft Baterias, Spain and South America, says: ‘The Pando hybrid scheme provides an excellent reference of how large-scale PV and conventional generation can be integrated with energy storage to deliver continuous and reliable electricity supplies for remote communities where grid connections are unreliable or non-existent.”

As a result of the storage and sophisticated control capabilities, the solar system is expected to generate some 7,500 megawatt-hours (MWh) annually, a figure which Saft claims is around double that of traditional PV-diesel hybrid systems. 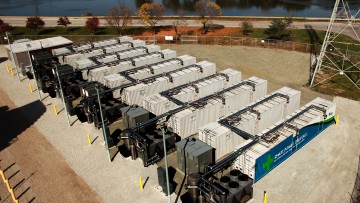 AES Kilroot Power Station in Northern Ireland is to be the location for Europe’s largest battery system to date when a 10-megawatt (MW) system is commissioned, due late this year.

The project is the first phase in a planned 100MW energy storage system for Northern Ireland, which has ambitious renewable energy targets, but challenges in relation to constraints on system costs. If built, the 100MW storage array is expected to save the Northern Ireland system operator more than £8.5 million a year.

As part of a more than 250MW development pipeline of grid-connected energy storage, AES is currently constructing a 100MW array for Southern California Edison (SCE) in the United States and has 86MW of utility-scale systems in operation.

Earlier this month, AES subsidiary Indianapolis Power & Light announced it is developing a 20MW grid-scale energy storage system, which will be the first such array in the 15 US-state Midcontinent Independent System Operator grid.

AES works with a number of supply companies to validate various technologies at its Battery Integration Center in Indianapolis. LG Chem batteries and Parker Hannifin power conversion systems are the first manufacturers to become certified suppliers for the AES Advancion storage system.