It’s not been an easy few years for the financial services industry, facing not only global meltdown, but also increasing high-level scrutiny from regulators and lawmakers.

However, there are plenty who would argue that it’s not been an easy few decades for the industry’s customers. Scandal after scandal has broken trust; from the debacle of endowment mortgages to the high cost of poor performing pensions, the customer has often seemed to be at the bottom of the priority list.

Now a new generation is driving change and there are new players in the market providing it. From Apple Pay to Metro Bank, traditional financial services companies are being challenged like never before and will need to become far more customer-centric to survive.

“Millennials [those reaching adulthood around the year 2000] want to buy in a different way; they have a degree of scepticism about financial services and a much more self-directed lifestyle,” says Martin Green, general manager of Europe, the Middle East and Africa at Medallia, a software company focusing on customer experience. “What we are seeing is financial service companies trying to understand the ‘customer journey’ much more deeply.”

Once mapped, those journeys and interaction – from opening a new current account to complaining about unreasonable charges – can be broken down to determine which bits work or don’t work for the customer, and improved accordingly.

Technology obviously plays a big part in this but, leaving aside the issue of cost, which can play havoc with a company’s ability to provide online or mobile services, in order to use technology advantageously, the financial services industry needs to understand how technology is used.

“Take the smartphone,” says Alastair Newton, vice president for research in banking at Gartner, a research and advisory company. “The most used function on a smartphone is the camera. So banks could be looking at remote cheque deposit, where the customer takes a picture of the cheque, or using the camera when opening a new account, perhaps to take a picture of a driving licence.”

That then matches up with the way we use our personal technology and enhances the customer’s experience of interacting with their bank.

But it’s not simply about the ease of transaction. “Banks will have to make the leap from service provider to trusted adviser,” says Ben Robinson, author of a paper on experience-driven banking, and chief strategy and marketing officer at Temenos, which specialises in software for financial services. “The success of new banking ventures such as Simple [the online banking startup, based in the United States, which offered customers data-rich analysis of the spending habits] demonstrates that customers would like their banks to be more involved in their financial and commercial lives.”

Technology can used to know a customer to the same degree that a bank manager of the 1950s knew his customers; it’s simply that the knowledge is not gleaned from afternoons on the golf course or cosy chats in the office. That data can then be mined to provide a service of real value, offering products tailored to the customer that could be delivered and accessed through a variety of channels.

Temenos cites a variety of ways in which banks could offer experience-driven services, including apps to help customers understand their financial goals, such as saving targets, offers based on location, such as discounts at a local restaurant, digital wallets to help manage multiple financial relationships, such as with utilities, peer-to-peer advice and lending. 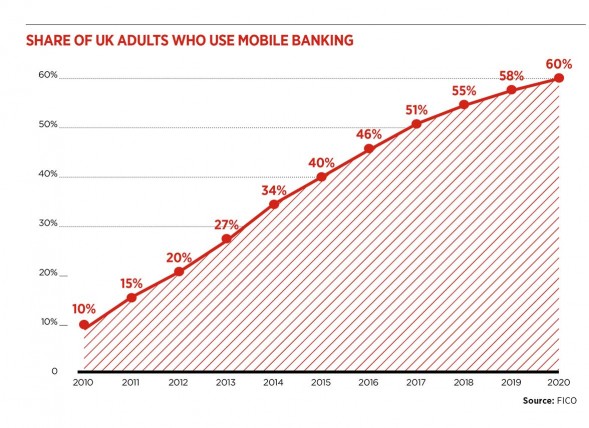 Many of these are already on offer. Garanti, a Turkish bank, has had considerable success with its mobile app iGaranti, which enables customers to send money directly to their Facebook friends, without needing to know bank details. You can get cash out of an ATM using your phone instead of a card, transfer money by speaking into your phone and ask an avatar for personalised financial advice.

According to Isik Ilhan, Garanti direct manager: “Many young people don’t have any experience of managing money and spending, so we’re trying to make it easier and more enjoyable.”

Most of us find financial services dull and boring – we want a quick, easy and unbiased experience

One of the big problems for many full-service banks is they may well struggle to find the money to invest in the huge variety of services needed for their increasingly fragmented customer base. The startups, unburdened by legacy IT architecture, are able to nip in and steal a comparatively small bit of that base, a kind of slow death by a thousand cuts, which leaves the behemoths with either the unprofitable bits or the unprofitable customers.

It’s not easy for the traditional players, with their piecemeal IT and corporate mindset that focuses on pushing products, to understand the old business model is changing. Nor is it simply a question of out-competing your neighbouring bank; customers are no longer comparing Bank A with Bank B, but comparing Bank A with other digital players, such as taxi service Uber or peer-to-peer travel agent Airbnb. They are looking for a different kind of experience and service.

“Financial services companies need to be working with their customers’ needs, perhaps investing in a product, such as data storage, that does not drive revenue now, but will do further downstream,” says Gartner’s Mr Newton.

So, for example, PolicyGenius, an insurance broker that started up in 2014, made its name with the Insurance Checkup, an online survey that tells the customer what insurance they need or if they need any at all. The service understands that most of us find financial services dull and boring – we want a quick, easy and unbiased experience.

Mr Green, of Medallia, calls this “the Uber-isation of financial services”. It involves rethinking what we want and how we want it; it involves a fresh eye and a willingness to be radical. However, it is not all always about ditching the traditional – after all, Metro has based its business model around being a branch-based bank – but it is about offering a proper, customer-based service.

What do all the next generation, challenger banks have in common? Oodles of chutzpah and lots of rude comments about traditional banks.

The new, nimble startups are more akin to a Silicon Valley tech company than anything that would be recognised by Captain Mainwaring, the stereotypical bank manager portrayed in TV’s classic Dad’s Army.

Often founded and led by individuals who have spent many years in traditional banks, the new banks will need all the brash confidence they can muster. According to Anthony Thomson, founder of Metro Bank and Atom Bank, getting a UK banking licence is “like being beaten again and again”.

One of the newest kids on the block is Atom Bank, the no-branches, mobile-only bank that calls itself “the Uber of online banking”. It offers its customers six values, aiming to be respectful, sharing, pioneering, courageous, energetic and joyful.

So far, so Disney. According to Mark Mullen, chief executive, whose CV includes top dog at HSBC’s First Direct: “We need better banks. But we also need smaller banks. Banks that won’t sit back and try to do as little as possible, or to put it another way, do what they absolutely must, not what they should. We need new banks. We need more banks. We need different banks. And we need them now.”

Which is all very well, but the detail remains thin. Atom, which is the first bank focused on a mobile app to gain a banking licence, but only received that licence in June, is the brainchild of chairman Anthony Thomson, who founded Metro

Bank, also one of the challengers to traditional players.

Current-account-only internet bank, Starling’s website promises: “We’re building a bank that doesn’t really look like a bank at all. Mobile beyond anything you’ve ever experienced, we’ll make managing your finances effortless and empowering.”

Chief executive Anne Boden says that by focusing on a single product, all of Starling’s investment will be concentrated “on the things customers need and use the most”.

She adds: “Why do customers have multiple products that do slightly different shades of the same things? Because selling complex products, with opaque charging models, made really good commercial sense.”

Starling believes that by limiting its offering to customers, it can provide a best-in-class product that will win over consumers.

The bank has one feather in its cap with the appointment of Lord Adair Turner, the former head of the UK’s financial watchdog, the Financial Services Authority, to its board. But founders Rishi Khosla and Joel Perlman bring the entrepreneurial flair. The pair have separately built businesses ranging from a research and analytics service provider for the global financial sector to a social digital payments platform.

That background, says Mr Khosla, means OakNorth will understand the entrepreneurs it hopes to serve.